Is the Bank of Japan Finally Losing Control?

While we like to focus on the US Federal Reserve (the Fed) because it controls the global reserve currency (the US dollar) and therefore is the most important Central Bank in the world… the fact is that it is Japan’s Central Bank, the Bank of Japan (BoJ), that has been leading the current course of Central Bank insanity for the better part of two decades.

Put simply, everything the Fed has been trying, the BoJ has got over 16 years’ experience with. As crazy as Fed monetary policy has been, the BoJ surpassed it by many multiples years ago.

To whit, the BoJ has bought so many assets via QE that today:

Put simply, the BoJ and its policies are beyond insane. We’re talking about a Central Bank that has essentially monetized Japan’s bond market and stock markets to a degree few thought was possible.

See also  Federal Reserve’s plan is to raise rates and QT aggressively, crash the market, then step in and ease when inflation is down to prevent a 1929 type of depression. Don’t fight the FED.

This has lead many to ask… when does this gigantic mess finally start to blow up?

The answer is that it might be happening now.

Monetary Policy only functions as long as the market has faith in the credibility of the Central Bank employing it. By the look of things, the BoJ is now losing that credibility.

Two weeks ago, the BoJ floated the idea that it would be targeting a yield of 0.1% on 10-year Japanese Government Bonds. This represented an increase in the yield target from 0% to 0.1%.

Japanese Government Bond yields have since begun to break out above this level multiple times… forcing the BoJ to repeatedly state that it would buy “unlimited” bonds to maintain this level.

Again, just so you don’t overlook the significance of this… the bond market IGNORED the BoJ’s statements of where it wanted bond yields to the point that the BoJ had to DIRECTLY intervene to buy bonds in a bid to get the market under control. 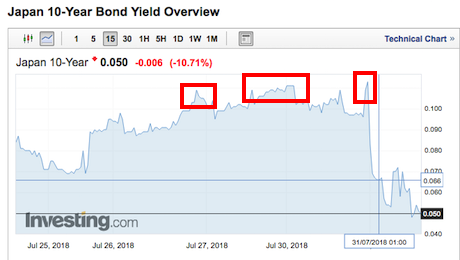 This is the first sign that the BoJ is starting to lose control of its bond market. Again, we have a Central Bank announcing policy that the bond market is ignoring… resulting in said Central Bank being forced to DIRECTLY intervene on a daily basis.

This is the beginning of the end for Japan. What’s coming will take time to unfold, but a major Central Bank is beginning to lose control.