Suddenly I have a lot to say about the economy. My sense is that we are on to a new phase after the 2015 shallow oil-patch centered recession and 2016-17 rebound. The data has a feel to it of a late cycle blowoff.

Let’s start with this morning’s personal income and spending. In the last 4 months, personal consumption expenditures, like retail sales, have taken off:

Typically, after mid-cycle personal consumption expenditures outpace retail sales (10 of the 11 previous cycles, to be precise). This is so regular that it is a primary mid-cycle indicator for me.

Well, as you can see, in the last 4 months, retail sales have come roaring back, even compared with PCEs. But if you cast your eyes to the left edge of the graph, you can see the tail end of the same phenomenon in 1999. Although I haven’t posted the nominal (vs. inflation adjusted) numbers, the same thing happened in the late 1990s. In 1999, both retail sales and PCEs accelerated, but retail even more than PCEs. When the stock market peaked at the beginning of 2000, both started declining rapidly, culminating in a recession 15 months later.

See also  THE BIG SECRET YOU ARE NOT SUPPOSED TO KNOW. The US Economy Is Collapsing- FASTER.

That we might be entering a blowoff stage is confirmed by the personal saving rate, as shown below:

Rapid declines in this rate tend to happen after mid-cycle. On the one hand, they are signs of economic confidence, as consumers are willing to go further out on a limb with finances. On the other hand, the lower savings rate leaves consumers vulnerable to future shocks.

In 1999, the blowoff was highlighted by the wealth effect. The recent melt up in the stock market may be energizing the same behavior. In particular, soaring consumer confidence in the last 4 months is concentrated on GOPers: 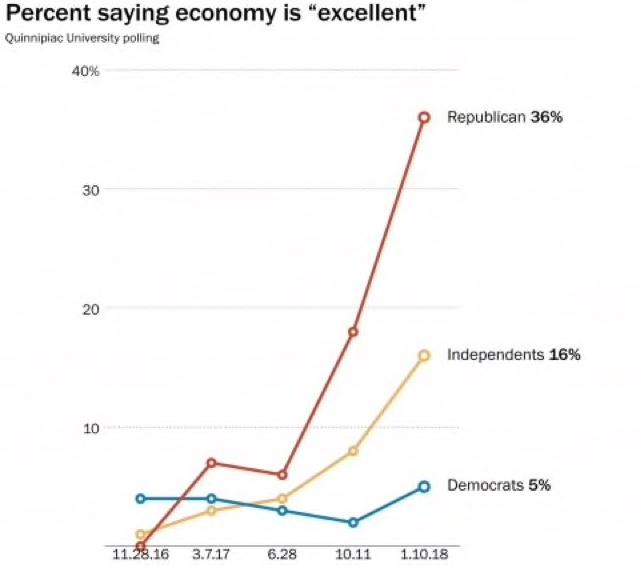 Even democrats feel a little more confident, and independents significantly more so. In 2013, the situation was reversed, where it looked like increased spending was powered by confident democrats (GOPers thought we were in the abyss).

Another facet of the data that suggests a blowoff might be underway is the surge in interest rates. Below is a graph of 2-, 10- and 30-year rates since just before the presidential election:

I don’t profess any insight as to whether interest rates will continue to rise or not, but it is interesting that the 30-year bond has not broken out of its high one year ago.

Housing stalled for several quarters last year in the face of a 1% increase in mortgage rates, and slowed down even more in 2014 when mortgage rates rose 1.4% off their bottom. If mortgage rates hit 4.4% and stay above that level for several months, I expect another housing slowdown to begin, although given the demographic tailwind from the Millennial generation, I wouldn’t expect an outright downturn in housing unless mortgage rates rise all the way to about 5%.