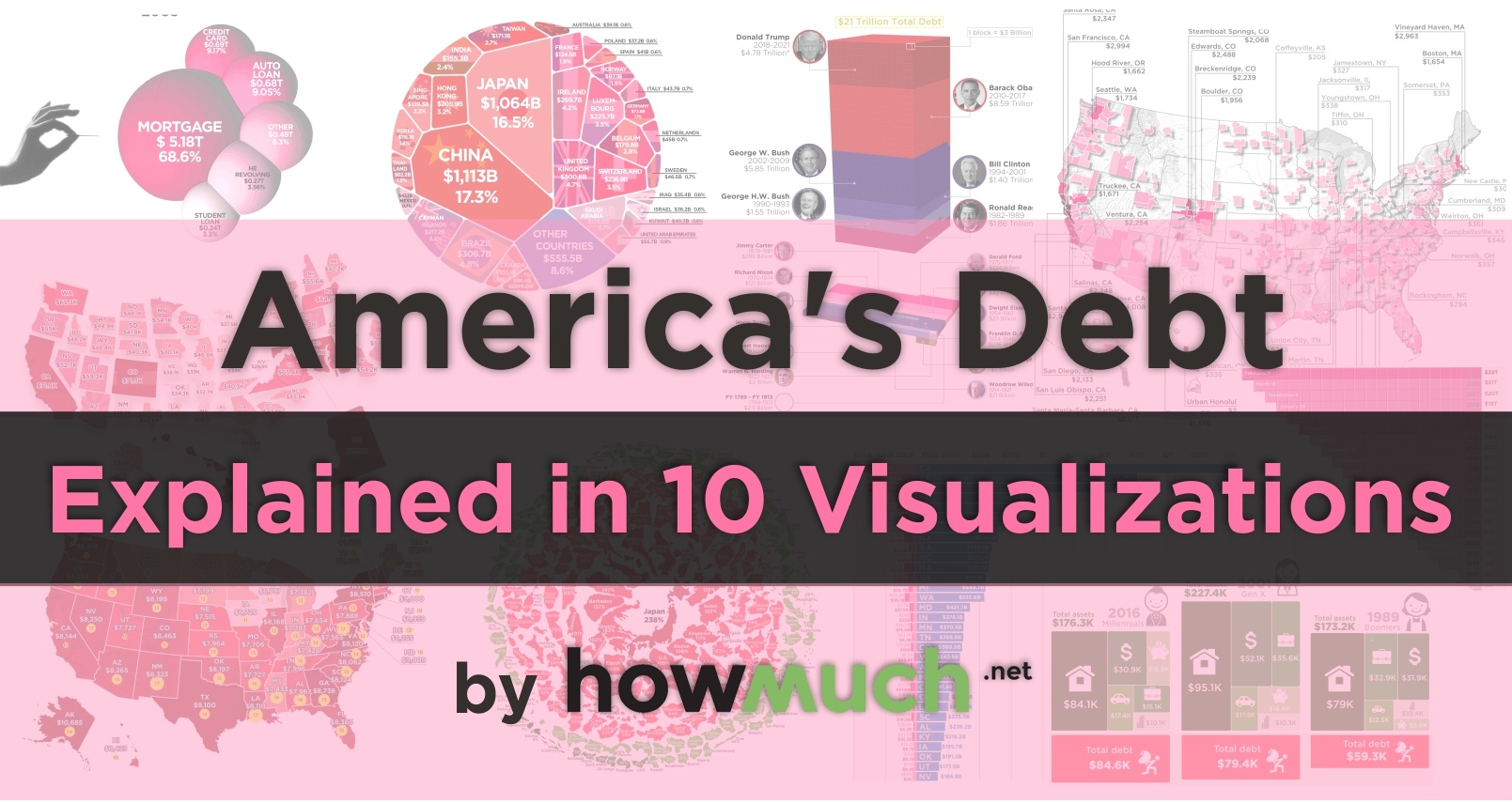 The U.S. economy may be in the middle of its largest expansion in history, but record levels of debt could signal trouble on the horizon. In February 2019, the U.S. national debt reached a record $22 trillion, and the annual deficit for this year alone is expected to be almost $1.1 trillion. At the consumer level, household debt (which includes mortgages, auto loans, student loans, and credit card debt) has risen for 19 straight quarters. With these overarching trends in mind, we compiled 10 of our recent visualizations to show a more complete picture of debt in the U.S. Here’s what we learned.

1. How Has the U.S. National Debt Changed Over Time? 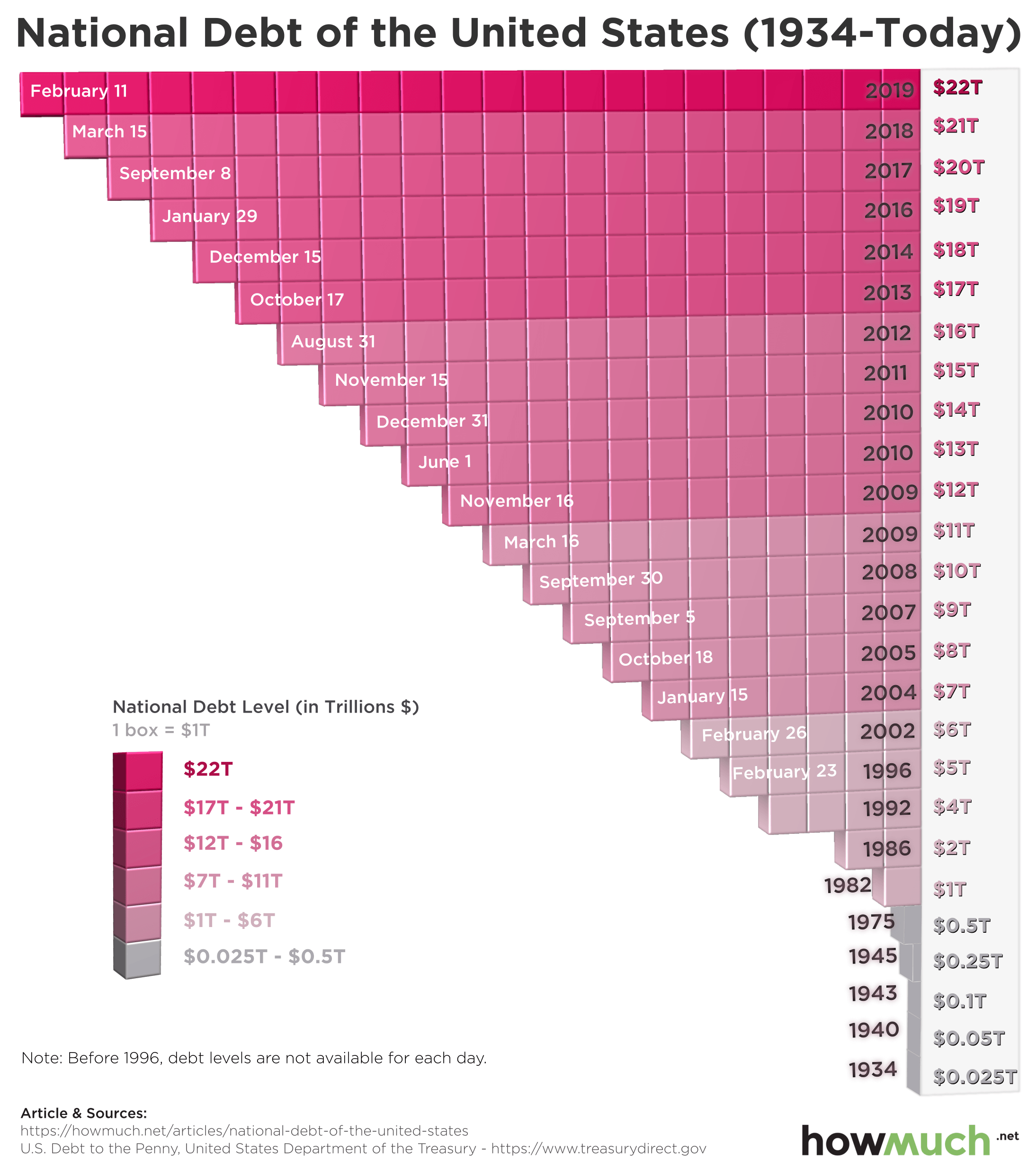 The visualization above references data compiled by The Balance from the Treasury Department’s “U.S. Debt to the Penny” report to map how much the national debt has grown since 1934. The national debt was only $25 billion back then, and it stayed below $1 trillion until 1982. After that, the national debt increased exponentially from the 1980s to the 2010s, eventually leading to the $22 trillion mark where it is today.

2. Who Should Be Blamed the Most for The Increase in National Debt? 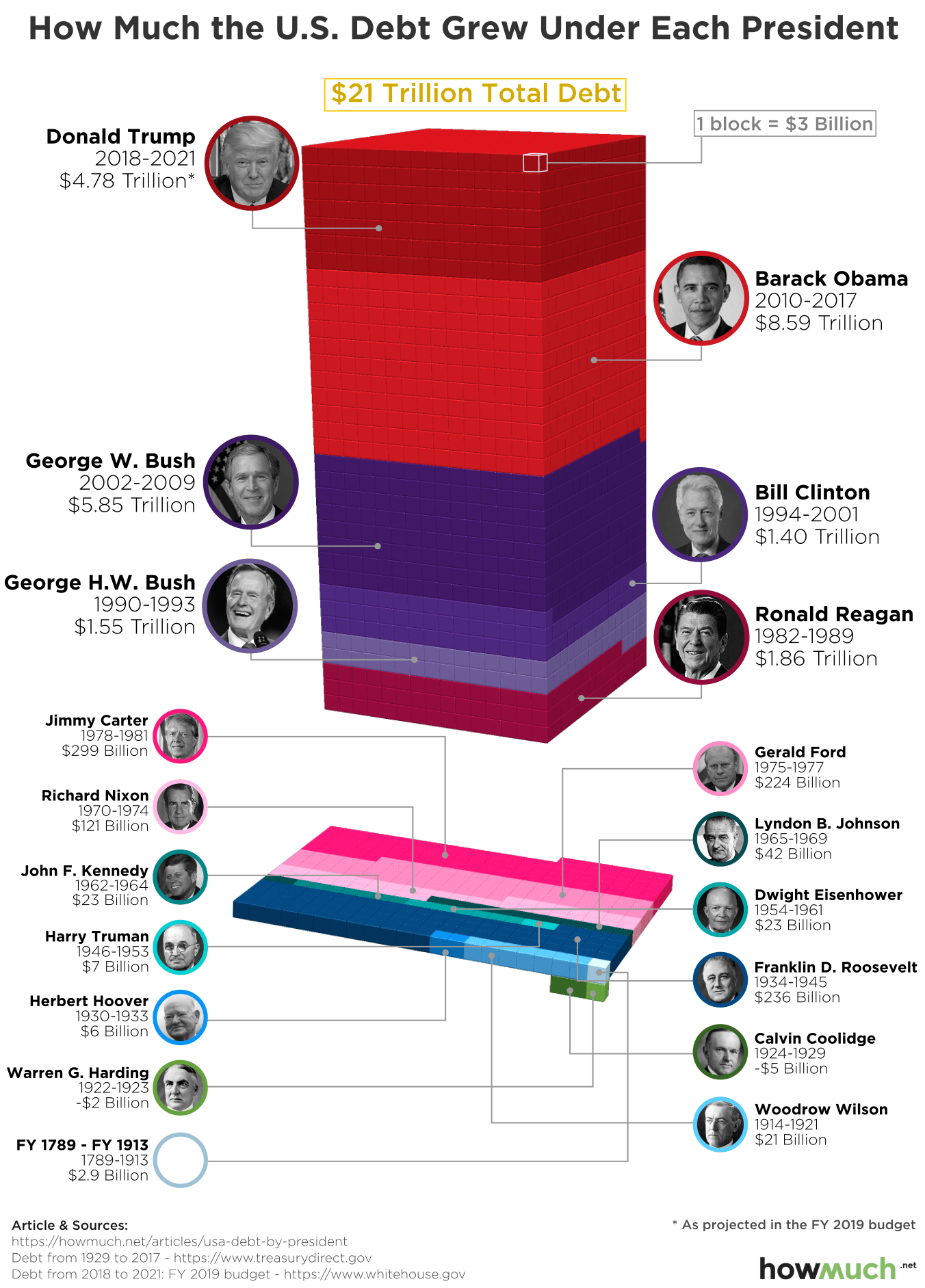 3. Which Foreign Countries Hold the Most U.S. Debt? 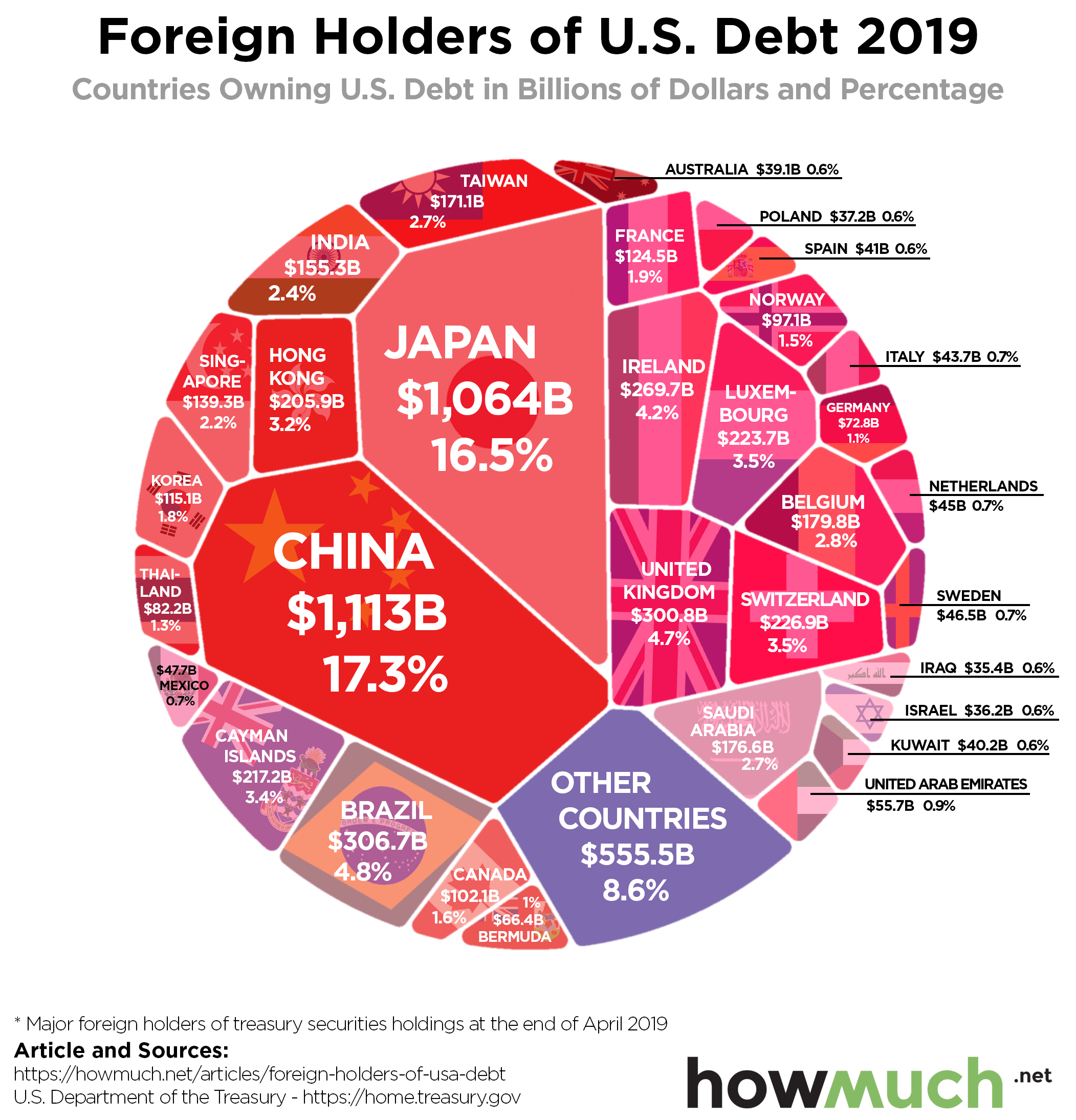 4. How Deep in Debt is the U.S. Compared to the Rest of the World? 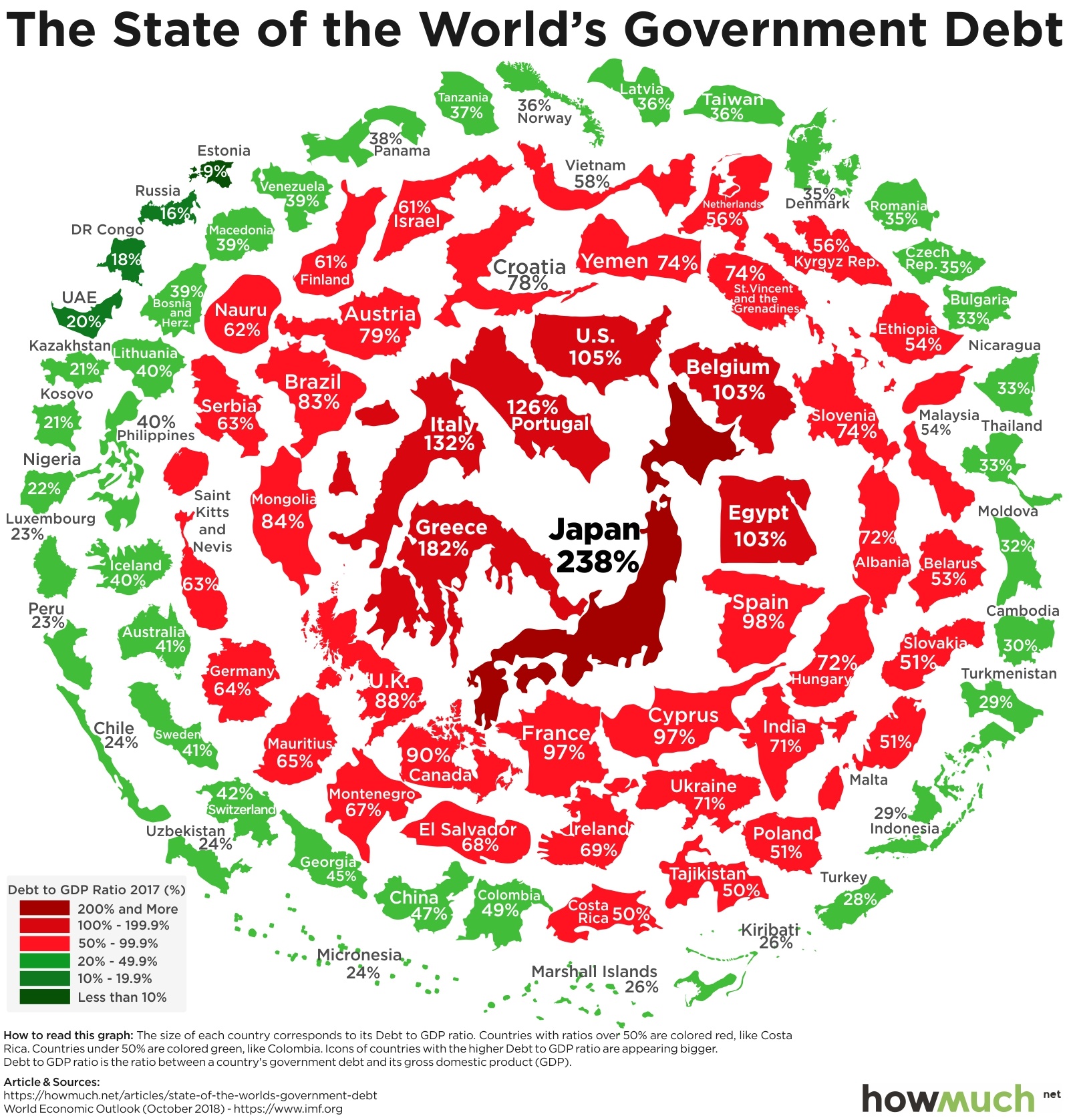 The good news is that the U.S. is not alone in its accrual of debt. While the U.S. national debt of $22 trillion is truly staggering, the country’s economic output is also much higher than other countries’. The best way to compare different countries’ national debts is to use the debt-to-GDP ratio, which compares a country’s output with its debts. The visualization above uses data from the International Monetary Fund to illustrate debt-to-GDP ratios between countries, with the larger, redder countries toward the center representing the highest ratios. The countries with the highest debt-to-GDP ratio are Japan, Greece, and Barbados. By this measure, the U.S. ranks 13th.

5. How Does Debt Compare to Output Within Each State? 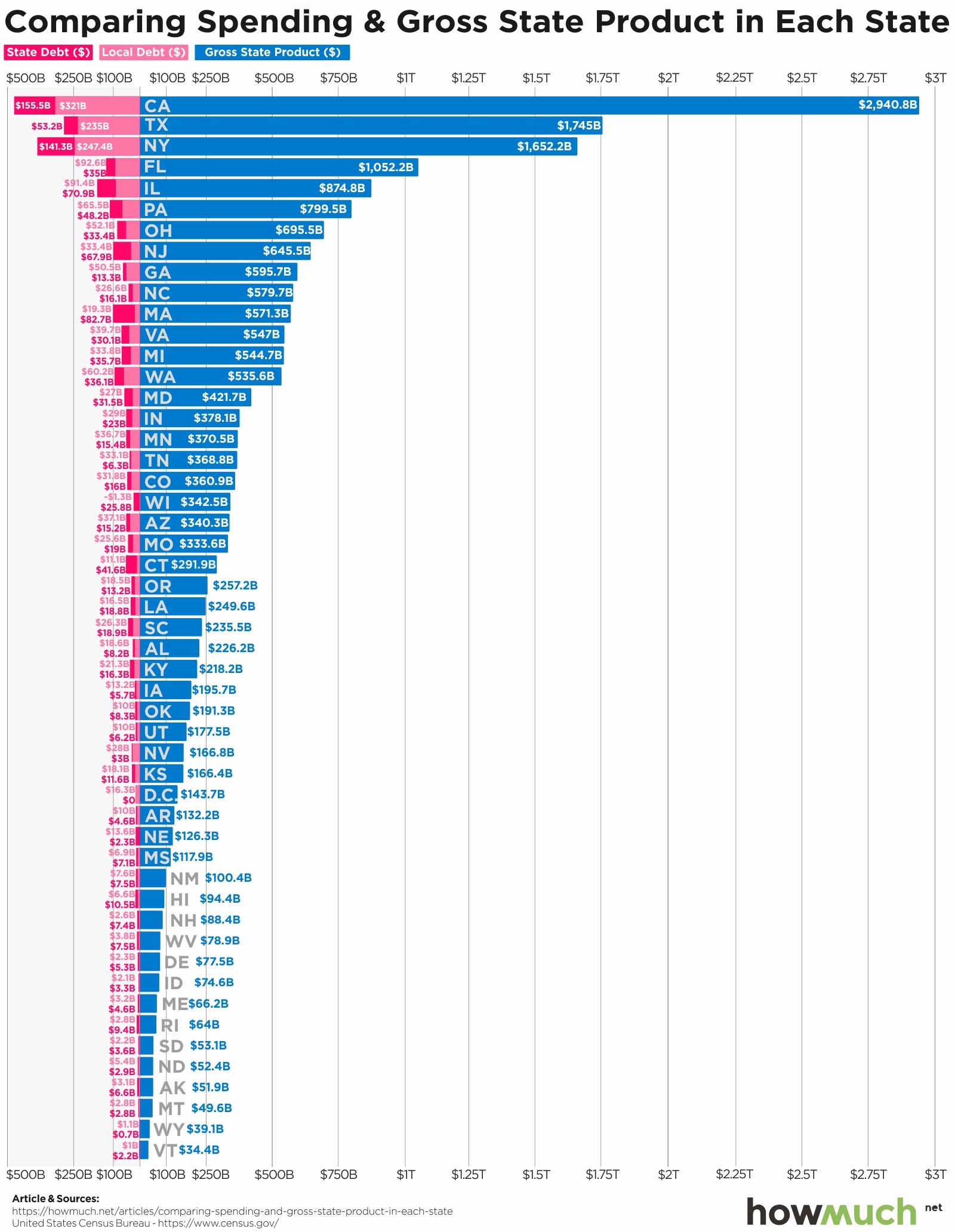 Now that we’ve analyzed U.S. debt at the national and international scale, let’s take a look at how debt varies across states. In the visualization above, we used data from the U.S. Census Bureau and the U.S. Government Debt website to visualize each state’s state & local government spending (shown in pink), measured against each state’s output (shown in blue). Overall, the states have a combined state and local government debt of $3.1 trillion and gross output of $21 trillion. Large states like California, Texas, New York, Illinois and Florida have the highest output, as well as the highest debt.

6. How Does the Debt Per Capita Vary Across the States? 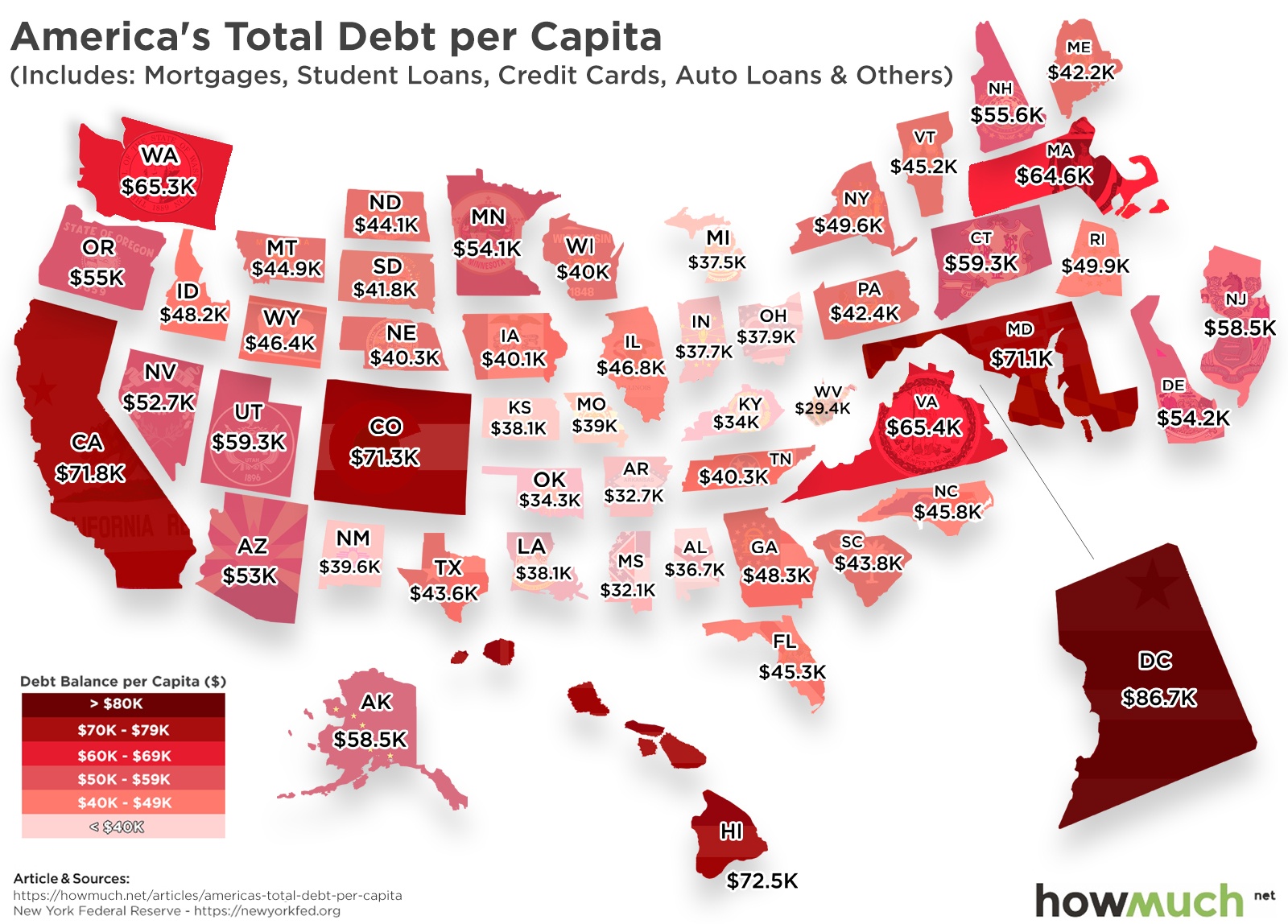 Outside of government borrowing, household debt is another measure of economic health. Household debt is mostly composed of mortgages, credit cards, student loans, and auto loans. In this visualization, we used data from Credit Karma and the New York Federal Reserve to illustrate consumer debt per capita in each state.  Across the U.S., the total debt per capita is $50,090, but this ranges from $29,430 in West Virginia to $86,730 in The District of Columbia. Notably, mortgages are the largest source of total debt per capita in each state.

7. How Has Personal Debt Changed Across Generations? 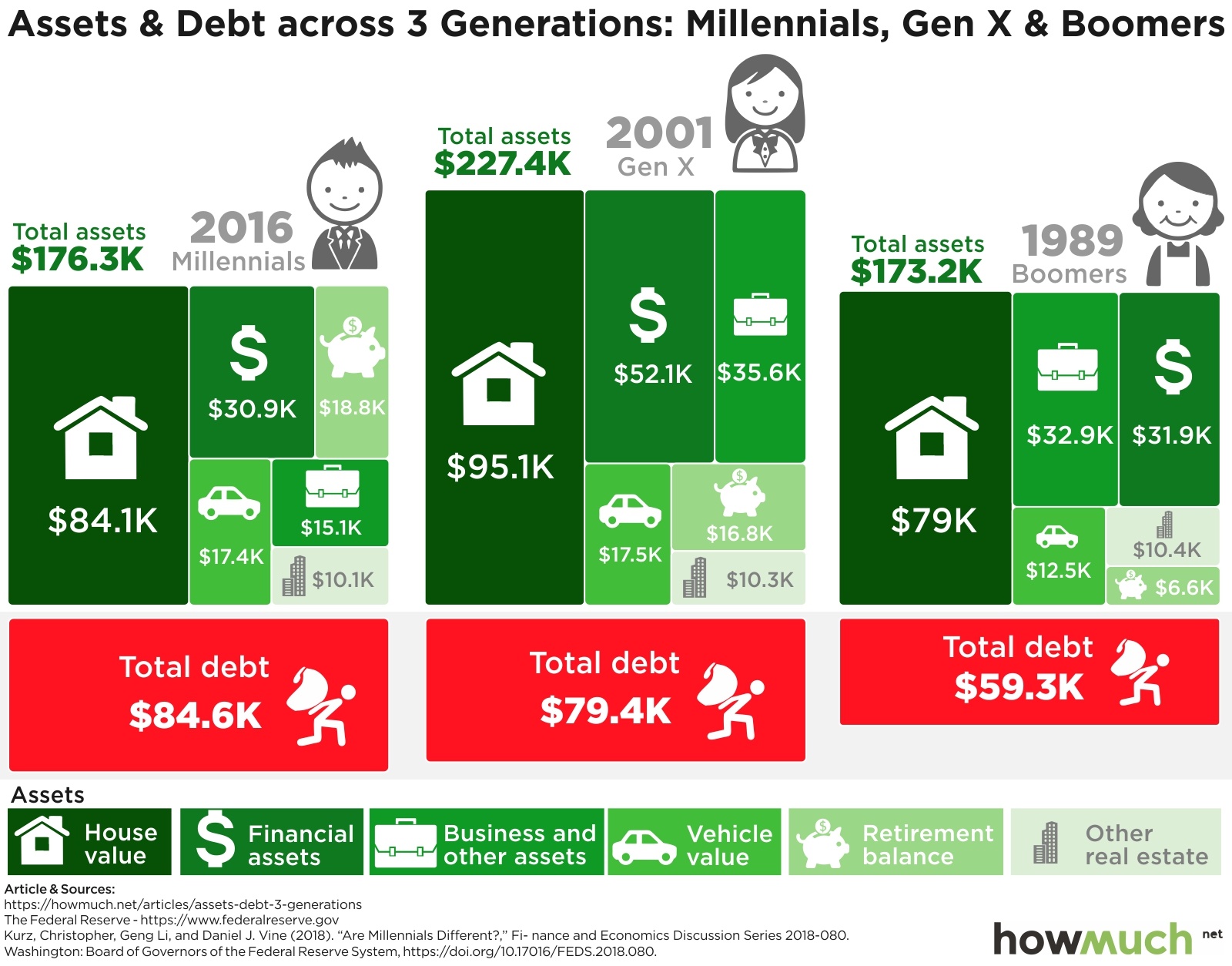 In addition to varying across location, household debt varies by age, too. For this visualization, we analyzed Federal Reserve data detailing debt and assets held by Millennials, Gen Xers and Baby Boomers (with all numbers adjusted for inflation). As of 2016, millennials had more savings than Gen X or Baby Boomers at the same point in their lives, but also more debt due to the massive increase in college loans. Millennials also have more equity in their homes than Baby Boomers did in 1989 but less than Gen X did in 2001.

8. Which American Cities Have the Highest Mortgage Payments?

9. How Much Credit Card Debt Do Consumers Have In Each State? 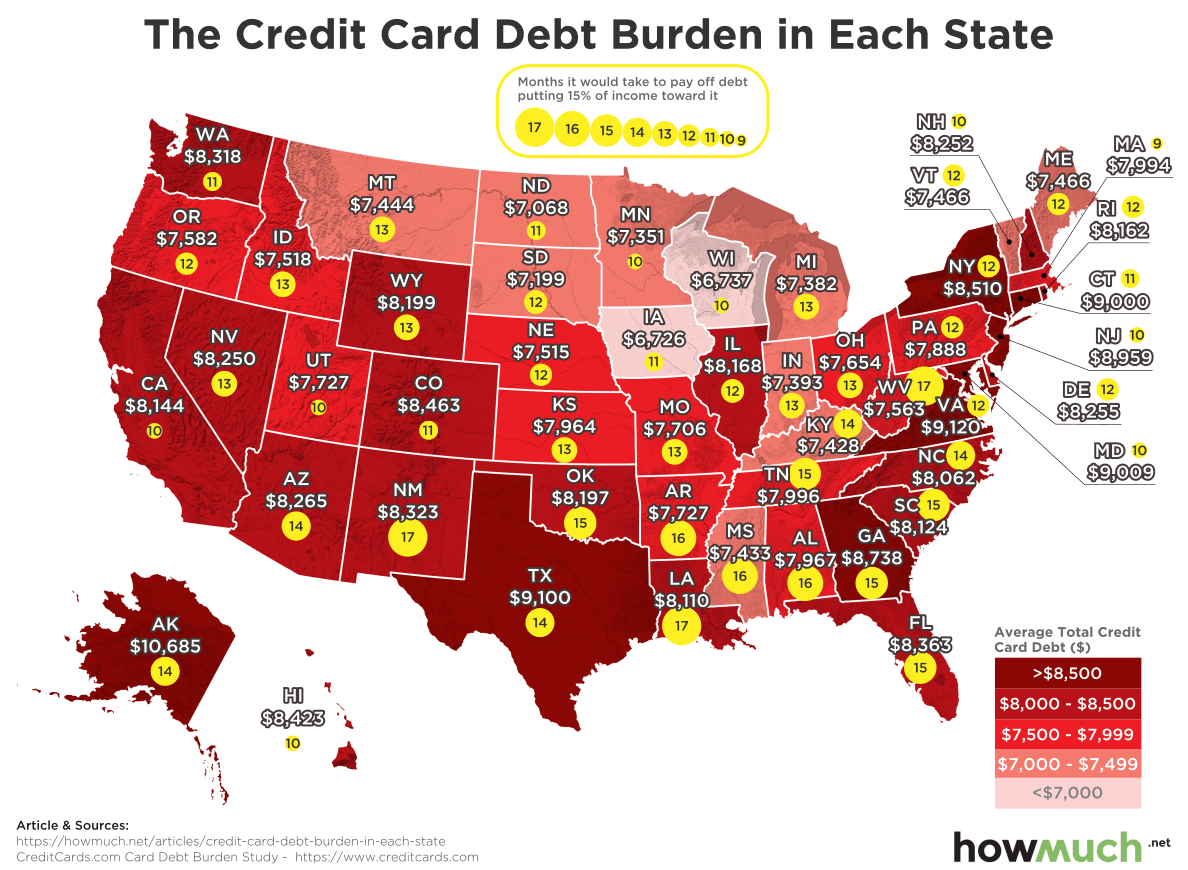 That’s the question on everyone’s mind. This final visualization uses the Federal Reserve Bank of New York’s Center for Microeconomic Data to show how individual categories of consumer debt (mortgages, auto loans, student loans, credit cards, HE Revolving debt, and other) have changed since 2003. The most noticeable changes are that mortgage debt as a share of overall household debt has decreased, while student loans as a share of overall household debt has increased. It remains to be seen if these trends are the “new normal,” or if they are part of a cycle in which different types of debt wax and wane. Regardless, it’s important for both governments and consumers to keep spending and debts to a manageable level to avoid major financial problems in the future.

What do you think about the overall picture of debt in the U.S.? Please let us know in the comments.