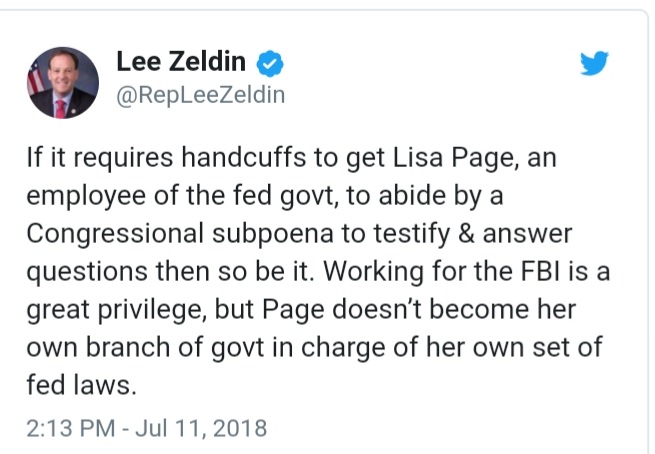 Send the US Marshals to her condo and bring her before congress in handcuffs.

1. Lisa Page can appear tomorrow with Peter Strzok (already scheduled).
2. Present herself for deposition Friday 13th.
3. Do both 1 and 2.

The chairman of the House Judiciary Committee, Rep. Bob Goodlatte, said Wednesday that Republicans recently were forced to call in U.S. Marshals to serve former FBI lawyer Lisa Page with a subpoena to testify before Congress, as he accused Page of “apparently” having “something to hide.”

The revelation came after Page’s lawyer claimed she “will cooperate with this investigation,” even as Page defied that subpoena to appear on Wednesday before the House Judiciary and Oversight and Government Reform Committees.

Lawmakers want to question Page about her anti-Trump texts with FBI agent Peter Strzok, with whom she was having an affair.

Goodlatte told Fox News that Page’s attorney initially agreed to accept service of the subpoena for Page, but “then turned around and immediately tried to reject it.”

“So that’s why we sent the marshals to her house, to serve the subpoena,” the Virginia Republican said. “They had to go back three times before they were finally able to reach her.”

Attorney Amy Jeffress told Fox News that Page would not appear on Capitol Hill on Wednesday because they did not have enough time to prepare. She said they would ask lawmakers to schedule another date for the closed-door interview.

On Tuesday night Trump-hating FBI lawyer Lisa Page and her legal counsel announced she will not appear before the House Judiciary Committee on Wednesday despite a Congressional subpoena.

OUTRAGEOUS! Lisa Page ignores congressional subpoena AND FBI wants up to 2 years to turn over Strzok-Page texts in Judicial Watch FOIA lawsuit — protecting anti-Trump FBI officials! Page can be arrested by Congress over any contempt!

Discussion of Congress’ ability to jail those in contempt…