The rapidly falling oil prices have finally claimed the first victim, but it won’t be the last.  The Alberta government announced late yesterday for a substantial cut in tar sands oil production to stem the hemorrhaging low oil price.  The price paid for tar sands oil has fallen a stunning 77% from its peak just two months ago.

While the Canadian tar sands oil price has fallen the most, various U.S. benchmarks are also experiencing substantial discounts to the standard West Texas Crude Oil price.  For example, the price paid for Bakken oil has dropped by 42% from its peak in October.  This is terrible news for the shale oil producers in North Dakota.

However, as bad as the situation is becoming for the U.S. oil industry, it isn’t as bad as the disaster taking place in Alberta, Canada.  According to the Zerohedge article, Alberta Orders “Unprecedented” Oil Output Cut To Combat Crashing Prices:

So in a long-awaited and according to local energy traders, overdue response, Canada’s largest oil producing province ordered what Bloomberg called “an unprecedented output cut”, an effort to ease a worsening crisis in the nation’s energy industry and adding to global actions to combat a recent price crash ahead of this week’s OPEC+ summit where oil exporters will similarly seek to slash output.

… The plan, which was announced late on Sunday, will reduce production of raw crude and bitumen from Alberta by 325,000 barrels a day, or 8.7% from January until excess oil in storage is drawn down. The reduction would then drop to 95,000 barrels a day until the end of next year at the latest.

READ  And so it begins: Doctors alarmed by new ‘mad cow’ brain disease

(chart courtesy of Zerohedge in the article linked above)

Now, while lower oil prices have prompted the Alberta government to issue a mandatory oil production cut, market forces will likely be the primary factor reducing U.S. shale oil supply.  Why?  Well, the prices paid for oil from the various shale fields and regions have also traded at a steeper discount to the standard U.S. WTI oil price.   For example, Bakken oil (Williston sweet crude) fell to a low of $39.55 a barrel from its peak of $66.50 in October. 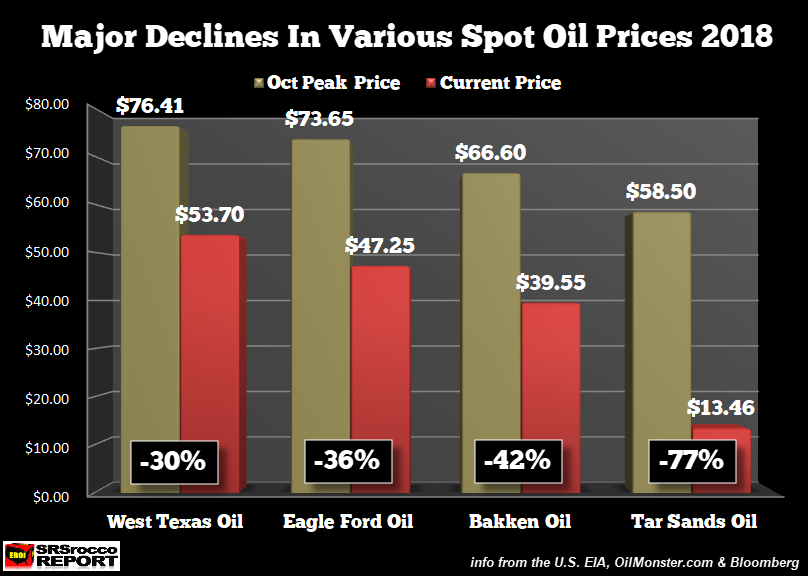 Furthermore, the price paid for oil coming from the second largest shale field in the United States, the Eagle Ford, has fallen 36% from its peak in October.  All of these benchmarks are trading at a much larger discount to the standard West Texas Oil price, which is down 30% from its high of $76.41.  So, as we can see, the higher cost unconventional oil supply sources are suffering the lowest prices.  No doubt, a double-edged sword.

The U.S. shale oil industry is in deep trouble as 75% of the companies are still suffering from negative free cash flow.  While I have written about this many times, one of my readers sent me the following article by Rystad Energy, MORE THAN 75% OF DEDICATED US SHALE OIL COMPANIES KEEP REPORTING CAPEX IN EXCESS OF CFO:

Essentially, the market is still not convinced that a typical shale oil E&P is able to grow in a self-sourced manner as more than 75% of dedicated US shale oil companies keep reporting capex figures in excess of cash flow from operating activities.

What is important to understand is that even with higher oil prices this year, three-quarters of the shale companies are still spending more than they are making.  Moreover, the U.S. shale energy industry has racked up nearly $300 billion in debt.  What happens if the oil price continues to slide during the winter months?  I have heard from someone in the industry that energy companies are already laying off workers.