Since the dark days of the Great Recession in 2009, America has experienced one of the most powerful household wealth booms in its history. Household wealth has ballooned by approximately $46 trillion or 83% to an all-time high of $100.8 trillion. While most people welcome and applaud a wealth boom like this, my research shows that it is actually another dangerous bubble that is similar to the U.S. housing bubble of the mid-2000s. In this piece, I will explain why America’s wealth boom is artificial and heading for a devastating bust. 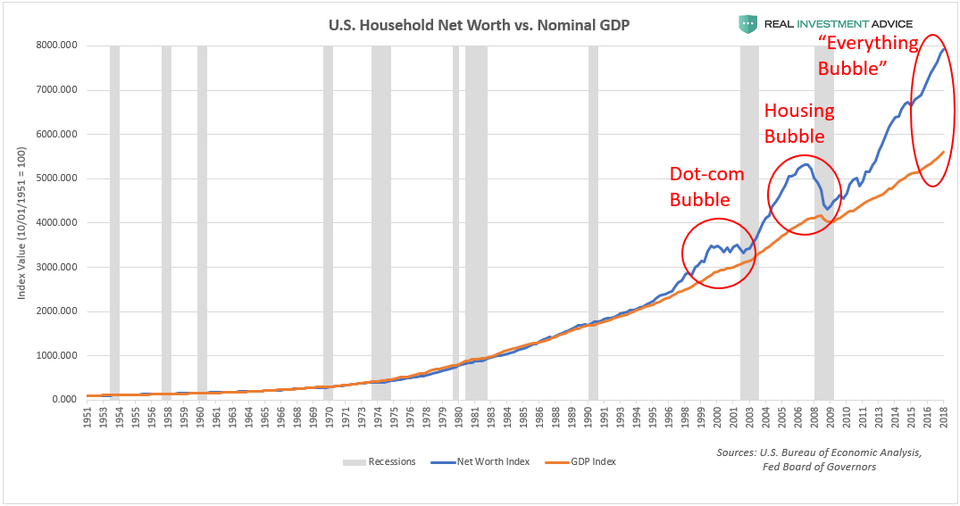 U.S. Household Net Worth vs. GDPREALINVESTMENTADVICE.COM 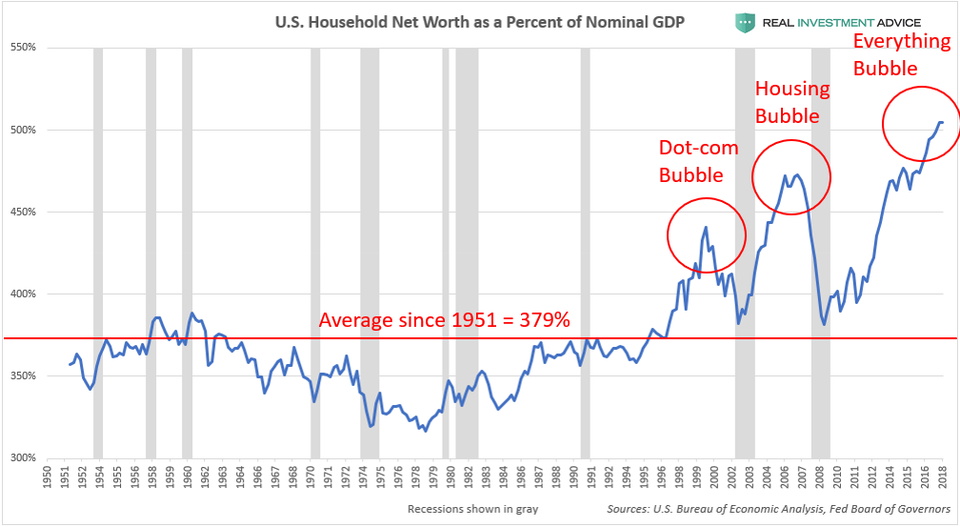 U.S. Household Net Worth As Percent Of GDPREALINVESTMENTADVICE.COM

In order to understand the current U.S. household wealth bubble, it is important to understand the underlying drivers of it: U.S. Federal Reserve-driven bubbles in stocks, bonds, and housing prices. (Note: I call today’s bubble the “Everything Bubble” because of the wide range of assets and markets that are involved in this bubble – learn more.) During the housing crash and Great Recession, the Fed was so desperate to create an economic recovery and bull market that it decided to do so via the brute force of monetary policy. By cutting interest rates to record low levels and pumping trillions of dollars worth of liquidity into the financial system (a policy known as quantitative easing or QE), the Fed succeeded in creating an epic asset boom that caused the S&P 500 to soar by over 300%: 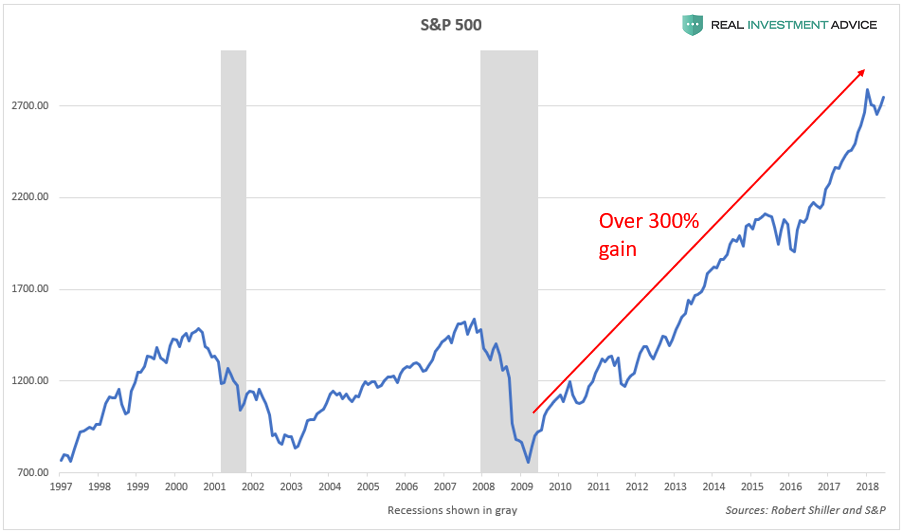 The Fed Funds Rate chart below shows how periods of relatively low interest rates have led to the inflation of bubbles. The “Everything Bubble” of the past decade is particularly dangerous and extreme because interest rates have never been at such low levels for such a long period of time. These unprecedented monetary conditions are the reason why the current household wealth bubble is so stretched relative to the underlying economy. 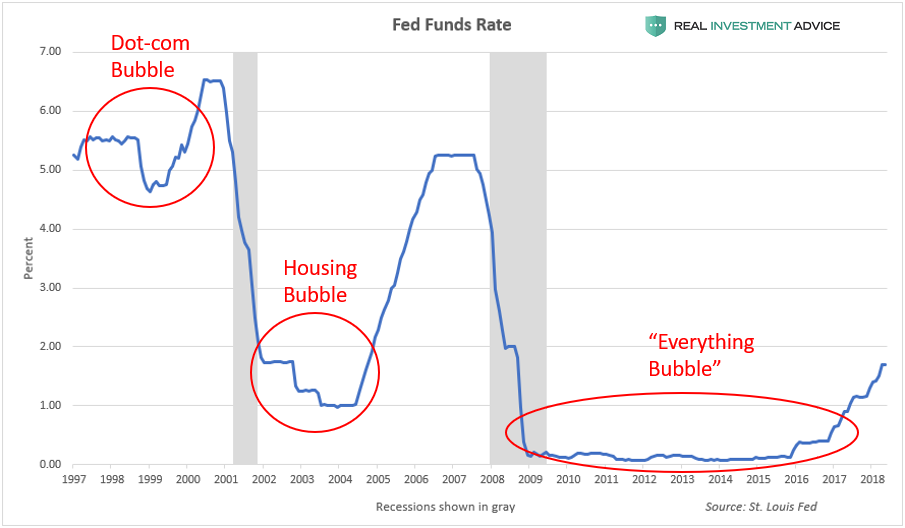 In addition to lowering the Fed Funds Rate to help boost the economy after the Great Recession, the Fed utilized quantitative easing or QE for the first time. QE entails creating new money digitally for the purpose of buying bonds and other assets, which helps to pump more liquidity into the financial system. The chart below shows the total holdings of the Federal Reserve as it embarked on its three QE programs, each of which led a surge in stock prices. 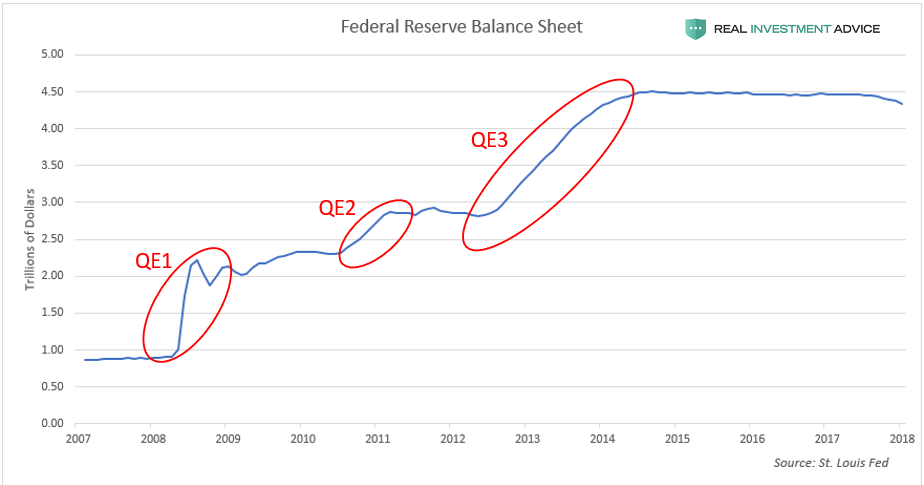 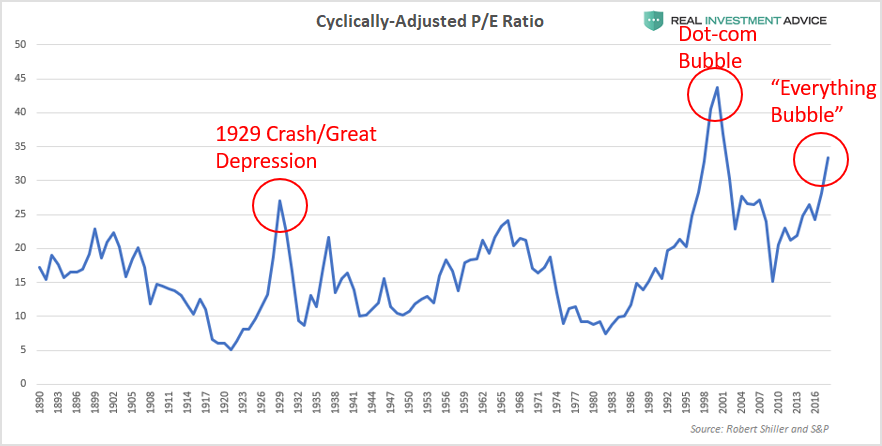 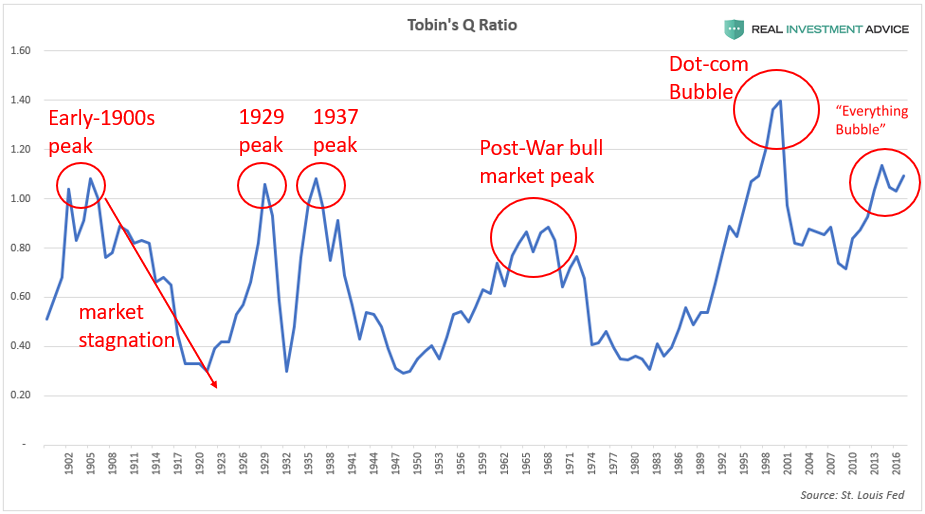 Warren Buffett’s “favorite indicator” – the U.S. stock market capitalization-to-GDP ratio (the total value of the U.S. stock market divided by the GDP) – also shows that the stock market is out of line with the underlying economy and is even more stretched than it was in the prior two bubbles. Buffett described this indicator as “probably the best single measure of where valuations stand at any given moment.” 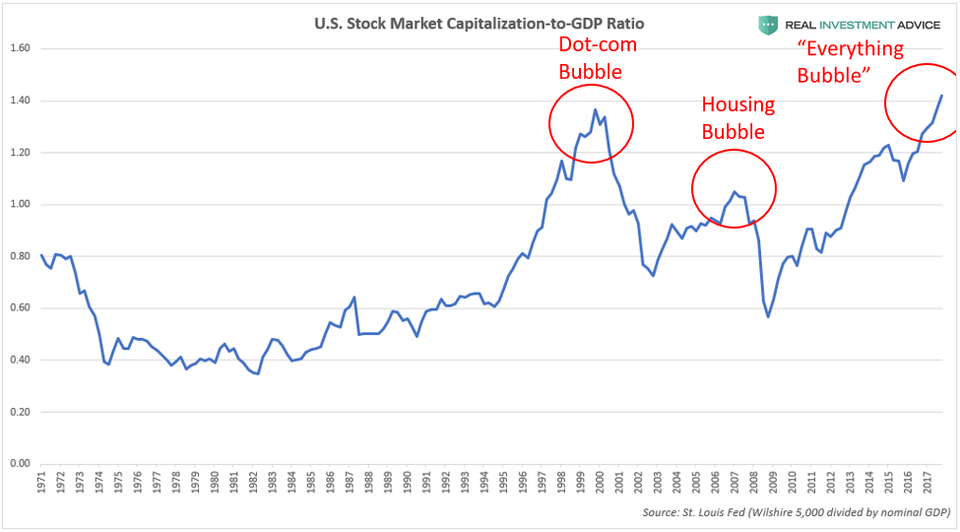 In addition to stocks and mutual funds, housing is another major component of U.S. household wealth (it is the largest holding for middle class households). U.S. housing prices have also been inflated by the Federal Reserve’s monetary policies after the Great Recession. By cutting interest rates and buying Treasury bonds and mortgage-backed securities, the Fed helped to push mortgage rates to record low levels. Since 2012, 30-year mortgage rates have averaged approximately 4%, which is one-third lower than the approximate 6% average during the mid-2000s housing bubble. The U.S. housing bubble inflated in large part due to (what were then) record low mortgage rates; I believe that today’s much-lower mortgage rates are creating another unsustainable, artificial housing boom. 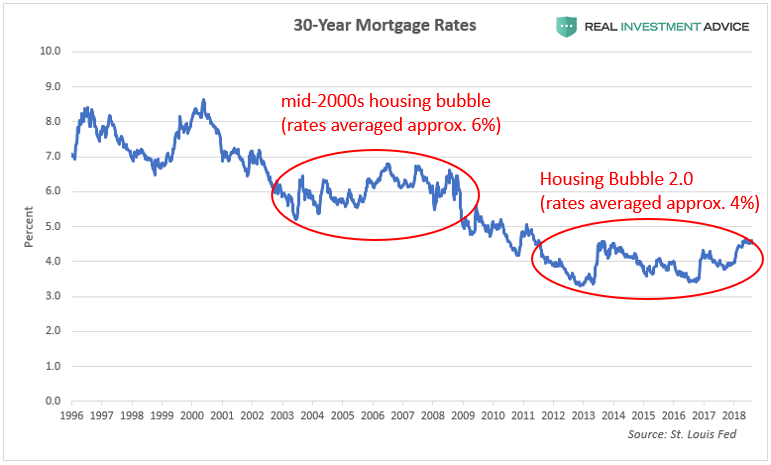 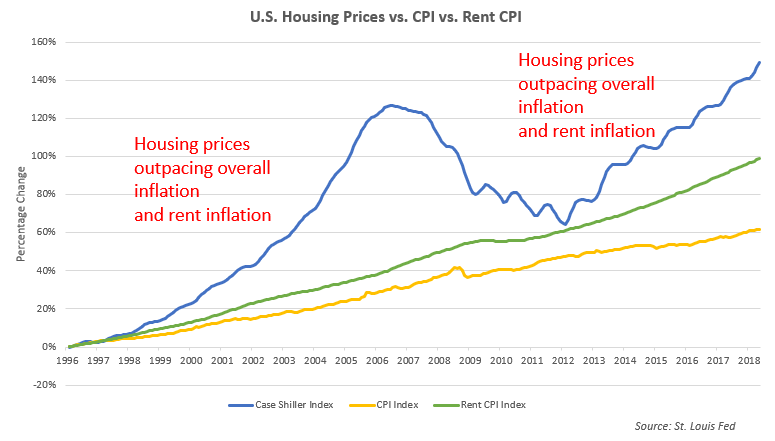 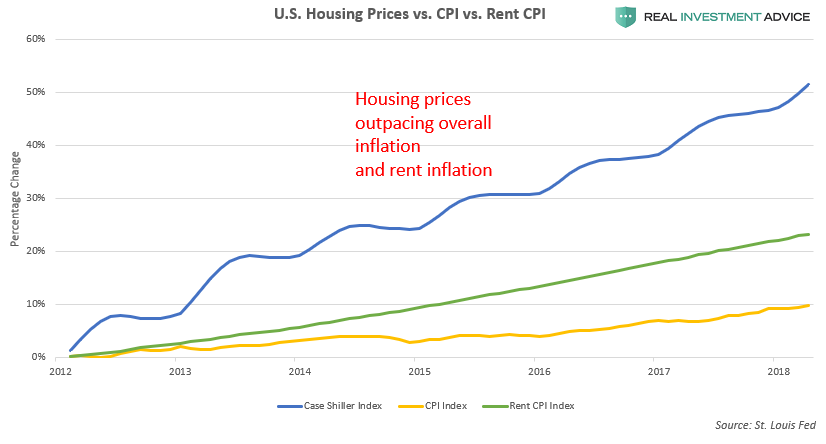 While overall U.S. housing prices are not as inflated relative to rents and incomes as they were during the mid-2000s housing bubble, they are still rising at an alarming rate – especially in cities such as Boston, Seattle, Denver, Dallas, Atlanta, Portland, San Francisco, Los Angeles, and New York City (click here for charts).

Here is a collection of articles from the past several months that discuss how frothy the U.S. housing market has become once again:

Bonds are another important component of U.S. household wealth that have been artificially inflated by the Federal Reserve. In the wake of the Great Recession, the Fed cut its benchmark interest rate and bought nearly $3.5 trillion worth of bonds and mortgage-backed securities, which helped to boost bond prices to all-time highs and push bond yields to record lows. The chart below shows the steady decline of bond yields, which corresponds with the bull market in bonds: 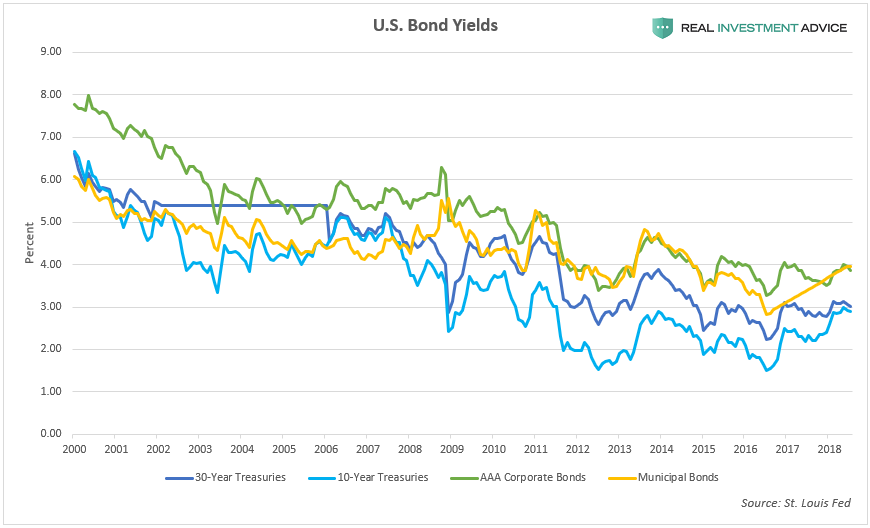 Though bond prices are still hovering near record levels, the debt that those bonds represent has exploded over the past decade relative to the underlying economy. From January 2008 to January 2018, nominal U.S. GDP grew 37%, while Federal Debt grew by $11.6 trillion or 122%, while corporate debt grew by $2.8 trillion or 82%. Ordinarily, as debt burdens grow, bond prices should fall and bond yields should rise to compensate for the higher risk that bond investors are taking on. Because of the Federal Reserve’s bond market meddling, however, bonds actually rose in value even though debt burdens grew dramatically over the past decade. This anomalous situation should not be expected to continue indefinitely – at some point, bond investors will wake up once they realize the exponential debt trajectory we are on in addition to the fact that the economy itself doesn’t have the capacity to grow anywhere near as fast as debt is.

See also  Everything wrong with AOC in two minutes

How The Wealth Bubble Contributes To The Recovery

For the past several years, I’ve asserted that Fed-driven bubbles in U.S. household wealth and asset prices are helping to drive our economic recovery. Unfortunately, this argument seems to fall on deaf ears most of the time. Higher asset prices help consumers feel wealthier, which makes them more likely to spend money, which boosts the economy in turn – this is known as a wealth effect. Just yesterday, Target’s CEO Brian Cornell said “we’re currently benefiting from a very strong consumer environment, perhaps the strongest I’ve seen in my career” – there is no doubt that the household wealth bubble is one of the main reasons for this strong consumer environment.

Former Fed chairman Ben Bernanke didn’t even try to hide the fact that the Fed was trying to create a wealth effect through its aggressive monetary policies. Bernanke wrote a 2010 op-ed in which he explained (what he claimed to be) the virtues of the Fed’s new, unconventional monetary policies:

And higher stock prices will boost consumer wealth and help increase confidence, which can also spur spending. Increased spending will lead to higher incomes and profits that, in a virtuous circle, will further support economic expansion.

While asset bubble-driven wealth effects may be effective at creating short-term economic growth and optimism, those asset bubbles inevitably burst and cause the wealth effect to run in reverse, often creating a recession – this is what happened during the housing bubble, and it will happen again when the current wealth bubble bursts.

In the post-Great Recession years, there has been an incredible amount of hand-wringing over rising wealth and income inequality – and rightfully so. Here are just a few statistics that show how extreme wealth inequality has become: the top 1% of U.S. income-earners possess 35.5% of the country’s private wealth, the top 10% possess 75% of wealth, the top 20% possess 87% of wealth, while the bottom 50% possess just 1.1% of the total wealth.