We are rapidly moving toward a one-party government just like China. The Big Banks and numerous corporations have reportedly decided not to allow donations to pro-Trump politicians or PACs. Certain members of Congress are reportedly thinking about designating the MAGA movement as “domestic terrorists.” Reminder: when you give power-hungry people total control of your legislature, this is what you get. It’s 1984 on steroids.

From John Carney at Breitbart

J.P. Morgan Chase, the nation’s biggest bank by assets and market capitalization, said it is halting donations through its PAC for six months. Citigroup, the third-largest U.S. bank by assets, is reportedly pressing pause on political donations for the first quarter of 2020.

Please listen to the Mexican President's warnings about Silicon Valley censorship when asked about the Trump ban. Following the center-right Chancellor Merkel, the leftist AMLO said they were becoming “a world media power" anointing themselves "judges of the Holy Inquisition": pic.twitter.com/5cL5vqq3Ug

DISSENT IS NOT ALLOWED: Twitter Will No Longer Allow Any Questioning of Fraudulent Election

Law Enforcement Today Facebook group with 900 thousand members taken down today..this is out of hand censorship!

FB has just blocked Law Enforcement Today – with it's nearly 900,000 members – from posting. All admins blocked from posting to any page and group they are associated with. This is out of control. @foxandfriends @MariaBartiromo @BreitbartNews @RandPaul @RepClayHiggins

SHOT: On the Day Twitter Banned Trump, Parler Downloads Surged by More Than 500%.

How convenient that “doing the right thing” dovetailed with squashing a rival just as they were gaining traction.

“Just start your own social media platform with rules you want. No, wait—I didn’t actually think you’d do it!”

Facebook and Twitter are perfect examples of socialism: You get it for free, you have no say in how it works. The guy who runs it is rich. They control your access to information. You have no privacy, and if you say anything they don't like, they shut you up 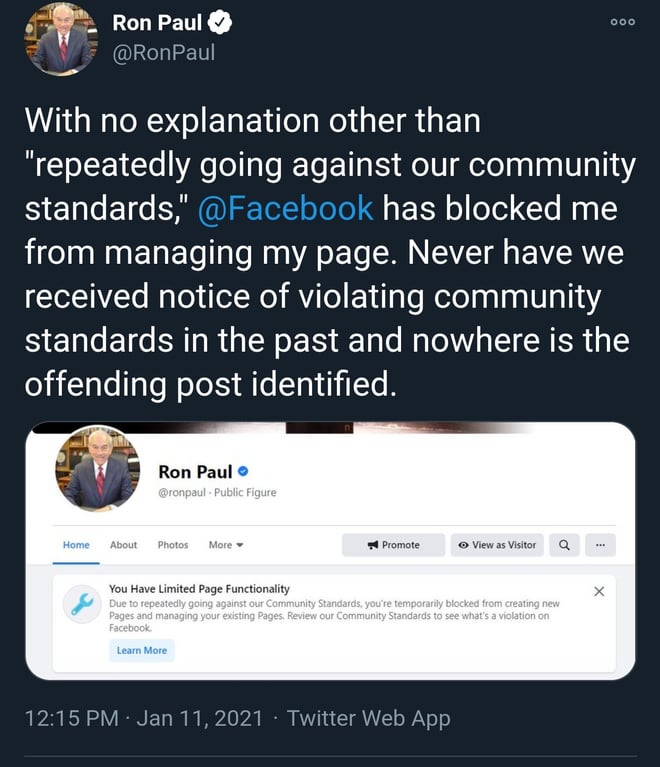 CAN’T STOP THE SIGNAL: The Great Purge Begins. “As for myself, I’m just going to keep talking about the things they don’t want to talk about on Twitter (like Biden family corruption and fraud in the 2020 presidential election) until they kick me off.”

The Pentagon is confronting a resurgence of white supremacy and other right-wing ideologies in the ranks and is scrambling to track how acute the problem has become in the Trump era t.co/Ty8c1QZ0oR