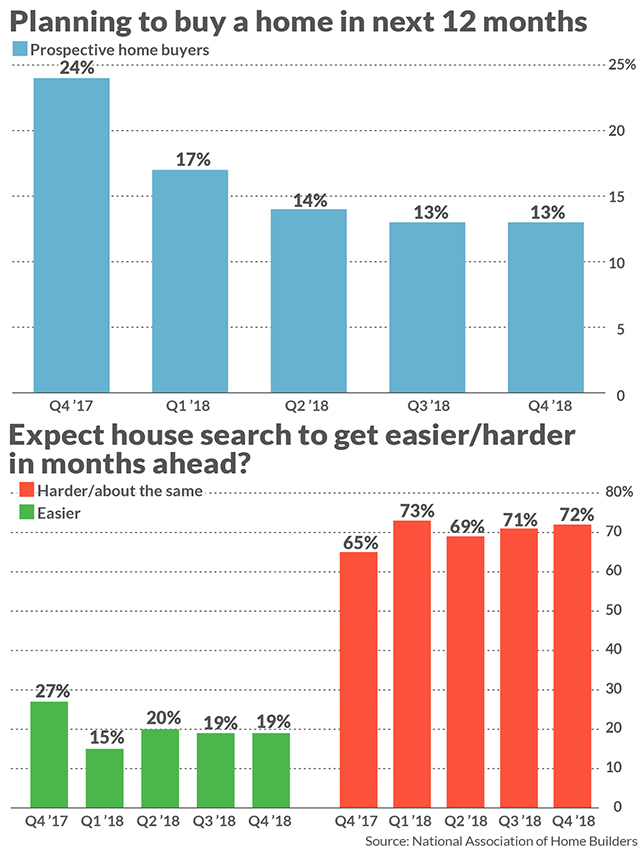 At the end of 2017, 27% of prospective home buyers thought their house hunt would get easier in the months ahead, but by the end of last year, that number had dropped to 19%. Over the same period of time, the share of people saying they planned to buy a home in the next 12 months fell from 24% to 13%.

Those two measurements characterize what might be the housing market’s biggest headwind right now. There’s a litany of hurdles for any would-be buyer to overcome, from rising mortgage rates to a lack of affordable supply. But taken together, they may make it too hard for many people to buy a home.

See also  INCENTIVES: 1.8 Million Americans Have Turned Down Jobs To Stay On Unemployment.

The numbers come from the National Association of Home Builders’ Housing Trends Report, a series of quarterly polls of a sizable number of American adults — 17,000 in the fourth quarter of 2018.

It’s worth noting that there is still sturdy demand for housing, and specifically for ownership. For example, as mortgage rates have fallen, mortgage applications have surged.

But rates are just one piece of the puzzle, as MarketWatch has noted in the past. In a blog post analyzing some of the survey findings, NAHB blamed the overall lack of affordability for many Americans deciding to give up.

The median sales price of a new home in November was $302,400, 12% lower than year-ago levels. And there were precisely 6.0 months’ worth of inventory, the exact measure that has generally determined a market evenly balanced between supply and demand.

40% of Americans only one missed paycheck away from poverty