You’ve likely heard of the term “income inequality.” It means wealthy people are making a larger share of our collective income.

In one sense, it’s nothing new. The people with the highest incomes have more of the total. Math guarantees it.

But the top’s share has largely grown in recent decades, as has the share of assets owned by the wealthiest.

In fact, Ray Dalio of Bridgewater Associates says that income inequality is now at the same level it was in the Great Depression.

Let’s review some charts from my friend Bruce Mehlman’s latest fascinating slide deck. It does a good job of explaining the drivers of this trend and its striking scale.

The State of Income Inequality

If you take GDP as a gauge for national income, it’s been growing far faster than median family income—even adjusted for inflation. The wider that gap gets, the more people feel left behind. 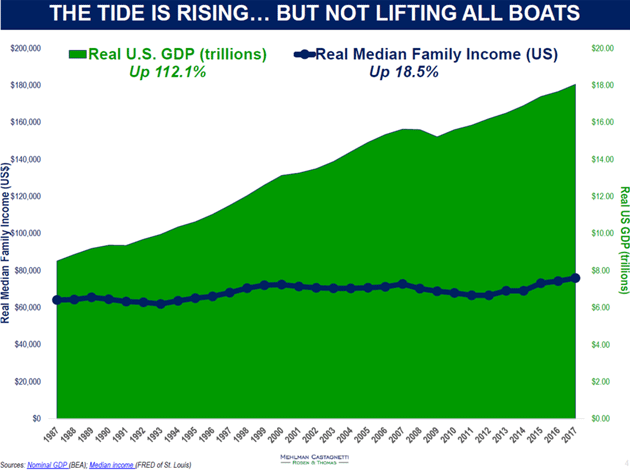 Here’s another one comparing stock market growth and family net worth. This isn’t really surprising since the top quintile owns most of the stocks. The lower 80% see little direct benefit. But the magnitude of the disparity is still remarkable. 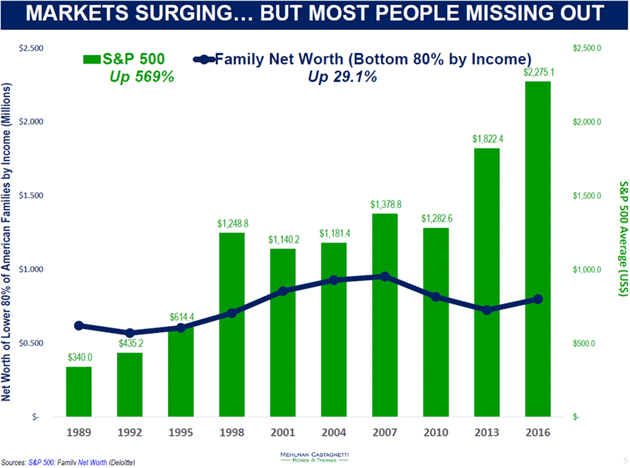 One reason income may be unequal is that talent is unequal, too. Or at least the willingness of businesses to buy talent.

Here’s a chart showing the most valuable companies have been getting that way with a smaller headcount. 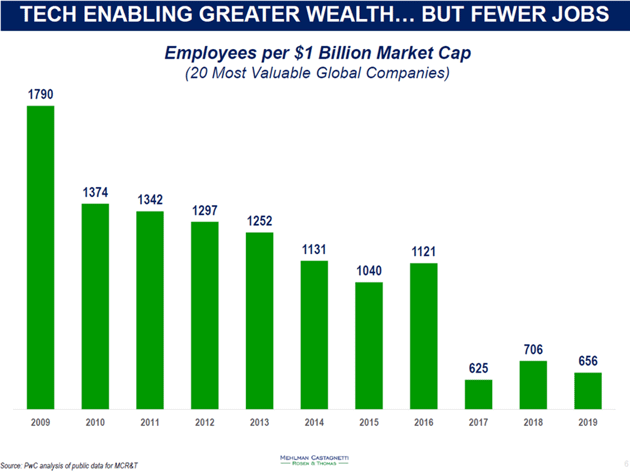 Mehlman thinks the reason is technology, and I agree that’s a big part of it. But so are other things.

For one, there’s a growing number of monopolies whose existence is enabled by financial engineering and monetary policy.

My good friend Ben Hunt of Epsilon Theory notes that the S&P 500 companies have the highest earnings relative to sales in history.

It’s a marvelously steady progression up and to the right, temporarily marred by a recession here and there, but really quite awe-inspiring in its consistency. Yay, capitalism!

Ben goes on to say many people think that is because of technology. He argues it is the financialization of our economy and the Fed’s loose policies.

As unhappy as all this is making people now, imagine how it will be when recession hits. And then couple that with an ever-increasing explosion of new technologies that reduce demand for many types of labor (like automated driving).

Some degree of unhappiness and discontent is part of the human condition. It’s what drives us to improve.

But we accept challenges as long as we think we have a fair chance of overcoming them. Many Americans no longer believe they have that chance.

That’s partly because they have higher expectations—possibly too high. But right or wrong, the perception is there. It affects behavior. And more to the point, it affects what people expect from the government.

When they perceive less ability to reach the next level on their own, they look to Washington for help.

A value-added tax is the only program that has a shot at actually paying for current spending, but it’s anathema to both parties.

No matter how I look at this, I keep coming back to gigantic deficits that the Federal Reserve will have to monetize in some fashion.

It will probably pursue something like the previous QE rounds but on a vastly larger scale. This will likely lead to an era of Japan-like deflation and economic doldrums.