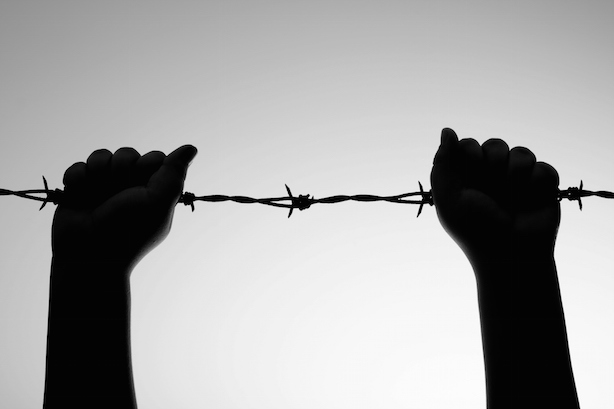 Black Lives Matter students and staff at UVA have denounced the statue of the university founder, Thomas Jefferson, and rather unsurprisingly released a list of demands. As with all of these demands, there is a fair amount of idiocy thrown in with some of the more reasonable ones. But it seems that the entire frenzy of BLM activists, Antifa, and other associated nut jobs are missing a really key lesson – Slavery.
Consider this: There are people living as slaves, right now, today, in many parts of the world. If you were really so incensed by the fact that slavery once existed in a place, surely you would be angry that it still exists in others…or is it all selfish hypocrisy?
The pygmy people of the Congo region are quite literally born into slavery, live their lives as slaves, and are owned by their Bantu masters. They are sold into sex slavery, they are paid at the whim of their owner (often in cigarettes or used clothing), and in many African nations denied any rights at all, including identity papers and education. They make up around 2% of the population; but this is under threat from people who hunt them and eat them, believing that to consume the flesh can give magical powers, and from interbreeding with their masters.
Some may argue that this is purely backwards villagers engaging in this shocking discrimination, but the Congo Parliament is fully aware, and doing almost nothing about it despite pressure from groups like UNICEF.
This is certainly not the only example of enslaved people throughout Africa. People are traded daily, sold into sex work, laboring, and pretty much any damn thing their owner pleases.
If the Black Lives Matter activists are so concerned about slavery in the past, why are they not concerned about slavery in the present? What’s the point in speaking out against slavery to people who have already denounced and stopped it? It’s like preaching to the choir! They should be using their energies to combat actual, existing slavery…unless of course, their agenda of hatred and anger actually has nothing to do with slavery in the United States.
Back to the list of demands. They are asking that students be taught about slavery. I agree completely. I think all students should be taught how Britain and the US fought wars to end slavery. And they should be taught that slavery still happens today in Africa and the Middle East, and that we should not accept this. If we are going to campaign against slavery, let’s hold up Britain and the US as shining examples of what nations NEED to be doing! Accepting the terrible treatment of human beings in the past, and embracing the fact that we no longer engage in such a hideous practice.

See also  It is Time to End the Nonsense About the Vaccines
See also  Legacy Media Gaslighting About "Defund the Police" to Defend Critical Race Theory
1,616 views