ELECTION PROGNOSTICATIONS: “Of course, we’re deprived of any painfully honest discussion of how much the Democrats need black voters in big cities to control the electoral votes of the swing states and why they’re having trouble getting these votes in the post-Obama era.”

“The four are Pennsylvania, Michigan, Wisconsin and Florida. Many analysts point to Wisconsin as the single state upon which the election could turn.”

As a Wisconsinite, I’m pleased and anticipating all the pandering, but I want to focus on this about Michigan, under the heading “Clinton lost big in Detroit…”: 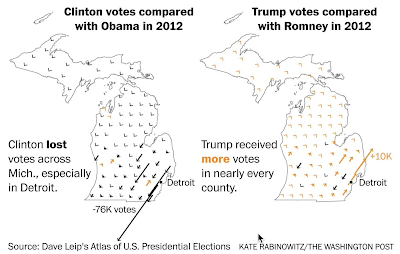 What happened in Detroit (and why won’t that happen again)? The article doesn’t really explain — except to refer to the declining population. Elsewhere in the column, there is talk about African American voters. Balz writes that there are 4 “demographic groups” that will be focused on, including “African Americans, and particularly younger African Americans, whose turnout levels will be critical to Democrats’ fortunes.” And in talking about Milwaukee, there’s this:

In 2016, Clinton suffered a falloff in the Milwaukee media market that was about double that of the state as a whole. Much of that erosion was concentrated in African American precincts in the city of Milwaukee. Combined with Trump’s big margins in the northwestern part of the state, that was enough to doom her chances.

Of course, we’re deprived of any painfully honest discussion of how much the Democrats need black voters in big cities to control the electoral votes of the swing states and why they’re having trouble getting these votes in the post-Obama era. Here’s how Trump talked to black voters in Michigan in 2016:

“America must reject the bigotry of Hillary Clinton, who sees communities of color only as votes, not as human beings worthy of a better future.”