Kanye built his empire off the gullible.

For a long time, he was part of the machine.

They (the tribe) choose who is popular, what products are advertised, and choose and manipulate the influencers who will make it all popular.

Most people are shocked to learn that nearly every YouTube millionaire was already rich or from a rich family.

It is all just Jerry Springer. You believe what is presented is reality, but it is just a script being performed.

Reality TV is as fake as an episode of Beverly Hillbillies.

Newsflash, the cast of Gilligan’s Island wasn’t actually marooned on a tropical island. This presentation of manufactured reality is meant to shape the real world into the form that the manipulators wish to create.

Kanye was a huge part of this.

The Kardashians aren’t actually worth ten dollars, but the apparatus created a fiction where their influence was priceless.

Even if you never watched an episode, you knew of Kim Kardashian because the manipulators forced society to embrace her as part of popular culture.

Most kids don’t like rap, but the culture says a kid can’t be cool unless they like rap.

Children are not educated enough, nor are they mature enough to form their own cultural identity.

This allows the manipulators to control pop culture, by removing the influence of parents from a child’s upbringing.

That is where old Kanye existed.

I believe he struggled with his realization that he was being used.

He is still deep in that struggle and even feels guilt for his fame and wealth that was made from it.

See also  “They lied to us about the mRNA shots.” - Gov. Ron DeSantis

Dwayne Johnson said it best in an interview about when he entered Hollywood.

He said that he was told if he followed the path they laid, he’d be rich and influential. If he went against that path, he’d be dropped like his proverbial namesake.

I’d like to ask Ye, as he claims to be born again and a different person than the Kanye West that was created by the manipulators of pop culture.

Why exactly are Yeezy’s selling for $800 when they are made in Vietnam for $20 a pair?

How Christian is it to exploit Vietnamese workers and go that long on profit margin?

The fashion world is worthless.

It exists to create resentment and division between haves and have nots.

A label can turn a $50 product into a $5000 product, simply because of a badge, even if the actual products without the labels are identical.

There is nothing shallower than that.

Kanye actually needs to give it all up.

He believes he made himself, but that isn’t actually true.

The American media is totally controlled by the jews.

The media is currently claiming that Kanye West must be insane to have claimed that jews are powerful and target people who question their agenda.

He is now banned from both Twitter and Instagram, meaning he is banned from the entire internet.

But these people can go around everywhere attacking him, while he has no ability to respond.

Insiders are in no doubt that his recent headline-grabbing behavior is the result of a mental break, and they believe it’s the most serious such episode that the rapper has suffered.

We’re told that the “Watch the Throne” star is barely sleeping, which is an issue that reportedly contributed to his hospitalization in 2016.

There is a 100% chance that every deal Kanye has with any major company is now over forever.

Even if he walks this stuff back, he’s not going to get anything for doing so.

You can’t just go out there and say that jews are powerful and target people who question their agenda for harassment, and Kanye said exactly that. 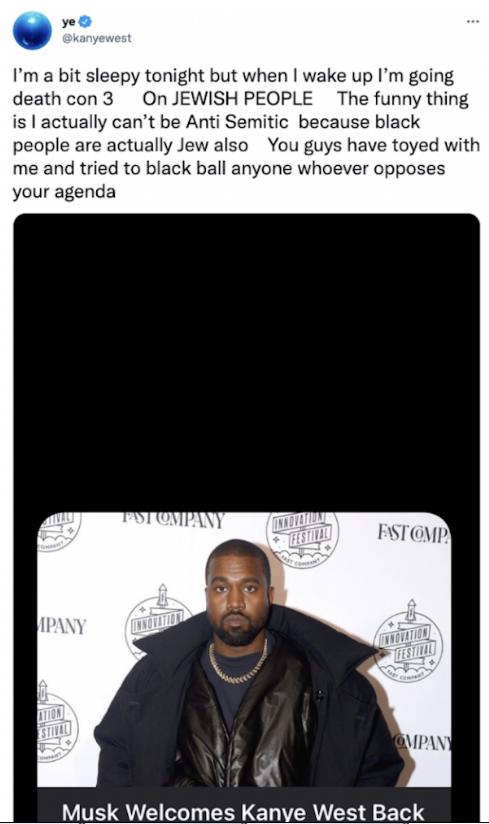