CNN is Out Defending Jussie 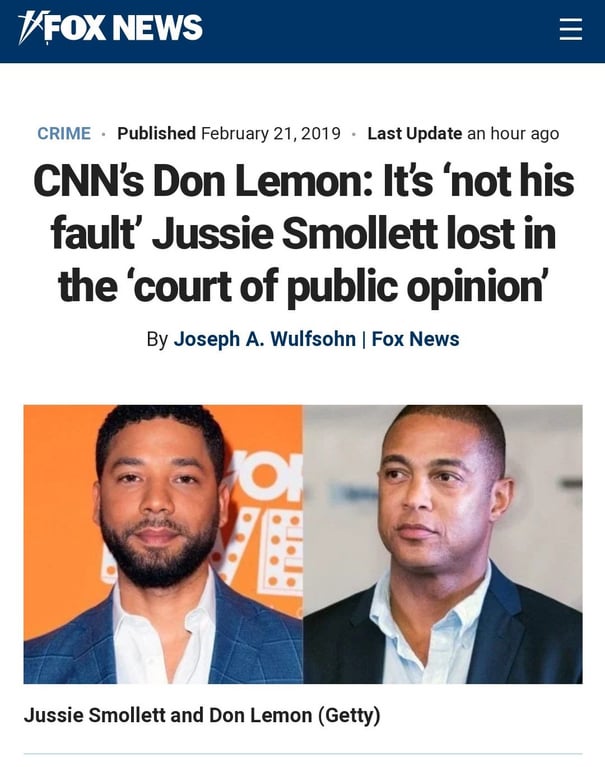 THIS IS CNN: Don Lemon: The worst part about Smollett hoax will be all the conservative pouncing, you know.

Sorry. Mr. Lemon. The media earned every bit of ridicule and criticism it earned by going all-in on Smollett’s weird claim from the get-go. They earned every bit of criticism for doing the same thing with the Covington Catholic High School kids for the same purpose — to pounce, if you will, all over conservatives, pro-lifers, and anyone who might have a little sympathy for Donald Trump.

At least in some corners of the industry, they haven’t learned a damn thing from either failure. Expect more to come.

“Don Lemon completely gives the game away of why CNN won’t simply own up to this and other failings. Because they are paid to act like opposition. Smollet, Parkland, Covington, list goes on… they believe they are political opposition. Not journalists,” Stephen Miller adds on Twitter.

Back in 20s, H.L. Mencken wrote, “It is the prime function of a really first-rate newspaper to serve as a sort of permanent opposition in politics.” If only old media had gotten that message instead of becoming Democratic Party operatives with bylines.

Police Say Jussie Smollett Staged HOAX For More Money . Apparently Jussie Smollett was getting 65,000$ per episode and was dissatisfied with his salary according to Chicago Police. They stated that Smollett staged the fake letter and the hoax attack presumably as a publicity stunt.

Social Justice has made victim hood lucrative and the presumed hoax allowed Jussie to appear on Good morning America as well as get significant national attention. So long as the far left, intersectional feminists, and social justice activists choose to always believe the victim even without evidence there will people set to exploit the good nature of those seeking to protect others.