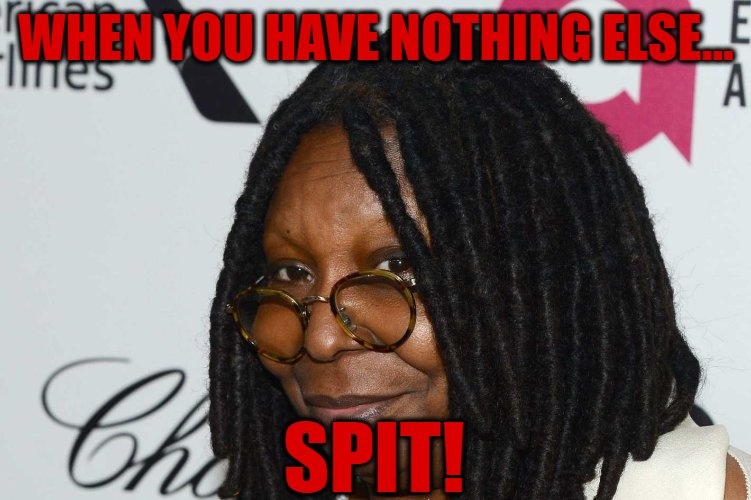 There’s an old saying from Eastern Europe which goes something like this: if you enter the pigsty, you’ll get eaten by pigs. Apparently, judge Jeanine Pirro was not familiar with this concept, or at least she wasn’t until Thursday morning, when she went to confront various unhinged “liberals” including Whoopi Goldberg on ABC’s The View. I am making a special mention of that has-been black actress with the improbable name of Whoopi (not to mention Goldberg) because she got into a heated argument with Judge Jeanine after the “live-show” was over. Backstage, that is.

However, the prelude of the backstage extravaganza was equally interesting. To begin with, Judge Pirro, who incidentally is a Fox News host, was invited by The View to promote her new book, whose title is guaranteed to trigger leftists in two shakes of a lamb’s tail: Liars, Leakers and Liberals. Obviously, she must’ve expected a “warm welcome” from The View crowd, as her book deals with the left’s anti Trump obsession and the mental disorder that is modern day so-called liberalism.

The war of words started with Anna Navarro, who said that she thought the book described President Trump’s White House. Pirro retorted with a common sense question: is America worse or better since the Donald entered the White House? She mentioned the economy, jobs/unemployment and so on and so forth:

“You tell me what metric in this country is worse off. Unemployment is lower than it’s been in fifty years, minorities, Hispanics, African Americans have jobs which they haven’t had in years.” Pirro looked at Whoopi and said: You know what? You suffer from ‘Trump Derangement Syndrome'”.

Then, things went downhill quick. Check out the video:

Being a hatred filled hag is a 24/7/365 job, and that pathetic TV show actually pays her for it. No one of moral and decent ethics should be watching The View, nor buying the products of its sponsors; doing so is  keeping this nasty foul mouthed woman employed.

Basically, Judge Jeanine mentioned Trump Derangement Syndrome and Whoopi made her point for her. If you ask me, Whoopi really needs a few rabies shots, but I ain’t no doctor. By the way, if memory serves, Whoopi owns a pot company. She should up her intake after her hate filled, uncontrolled violent tirade yesterday. Have a cookie Whoopi, be calm, inhale, puff, goosfraba:

But wait, there’s more. After their heated argument during the show, Judge Pirro described to Sean Hannity  what happened at the after-party. Backstage, that is.

.@JudgeJeanine #BREAKING just told @seanhannity on #Hannity radio @WhoopiGoldberg behind the scenes after their on air heated exchange on the @TheView

Judge Jeanine: Did you just say that to me?

“As I was exiting the stage, [Whoopi Goldberg] was already off, and she said, ‘F you. F you,’  and then I said, ‘Whoopi, I can’t believe it. I have fought for victims my whole life.’ She got in my face to the point where she was actually spitting at me and she said, ‘Get the f out of here. Get the f out of this building,’ and she’s pointing to the door. It was almost as though I was a dog, and she cursed me out and said, ‘get the f out of this building. She was nuts going off the set. I’ve been a prosecutor, judge, D.A. for 30 years. I’ve tried murder cases. I can go toe-to-toe anybody. But that was abuse. And it was sad. It was a sad moment that you know, she was triggered. And I’ve never understood triggering.”

General rule of thumb is to never discuss anything beyond the weather forecast or the time of day with a liberal. Although things are getting so bad they’ll probably try to argue over that as well.

The Left can’t debate anything. Once the craziness comes out of their mouth and someone responds to it, they will shut you down and talk over you. She should never have gone on the horrible show. Pirro should have known that she would be treated like crap. Liberals don’t know how to deal with anyone that doesn’t agree with them.