From Nick Giambruno, Editor, International Man:
Buying marijuana in California is now as easy as buying beer.
On January 1, it finally became legal for adults age 21 and up to buy recreational cannabis in the state.
This was the true tipping point. It practically doubled the US legal cannabis market overnight.
Now that recreational pot is legal in California, the US legal marijuana market is expected to grow from $6.5 billion to $50 billion by 2026. That would make it the same size as the American craft beer and chocolate markets combined.
At this point, it’s nearly impossible to reverse the legalization trend—both in the US and globally. California is just too enormous in terms of people, money, and influence.
Think about it… the state has the world’s sixth largest economy. Only China, Japan, Germany, the UK, and the US as a whole are larger.
The new jobs and desperately needed tax revenue (an estimated $1.4 billion annually) will make it politically impossible for the state’s government to roll back legalization.
Likewise, because of California’s sheer size, it will be politically and practically impossible for the US federal government to roll it back, either.
I expect many other US states to legalize recreational use in the near future, especially those with budget problems. (To date, 29 states have approved legalized medical marijuana and eight states have approved recreational use. Washington, DC, has also approved both.)
The end of marijuana prohibition in the US became inevitable the moment California voters decided to legalize recreational use. Reversing this trend now would be more difficult than pushing a 20,000 pound boulder back up a mountain with your bare hands.
However, most of Wall Street—and most US politicians—haven’t come to terms with this yet. Change is hard to accept, especially for pencil pushers.
That’s why the situation in California represents such a huge opportunity.
Investing in the nascent cannabis industry right now is like investing in the beer industry at the tail end of Prohibition.
Fortunes are going to be made. And you can be a part of that.

The Birth of a $150 Billion Industry

The United Nations estimates the global cannabis market to be worth around $150 billion annually. I think that’s conservative.
For perspective, about $33 billion worth of coffee is produced annually. So, the marijuana market is about four or five times bigger than the coffee market.
It’s also bigger than the iron, copper, aluminum, silver, corn, and wheat markets. You can see how these commodity markets stack up in the chart below. 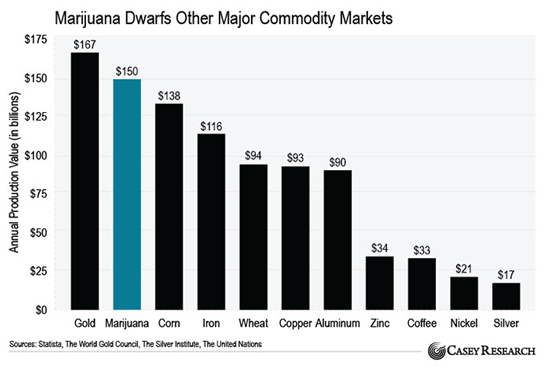 Until now, almost all of this money has been underground. But that’s about to change.
The end of marijuana prohibition means we can finally profit off marijuana without risking jail time.
Widespread marijuana legalization is inevitable. It’s happening. And it’s unleashing a $150 billion market that was once underground.
Those profits are up for grabs.
In the coming months, many investors will make life-changing fortunes as the marijuana market steps into the light.
For now, though, marijuana is still illegal in most places.
Up until recently, that made it virtually impossible for regular investors to cash in on the lucrative marijuana trade.
Prohibition has funneled billions of dollars in profits to drug lords, corrupt government officials, and thugs.
Those days are numbered…
I’ve never seen an opportunity with as much profit potential as legal marijuana has right now.
I think investors could make an absolute killing in the US “green rush.”
Next week, I’ll be hosting a free webinar with legendary speculator Doug Casey that shows you how to join the party for the “second” marijuana boom. We’re calling this event the New Marijuana Millionaire Summit.
During the summit, we’ll share details on how anyone can position themselves into the future “Amazon” and “Home Depot” of the legal pot industry. Click here for more details.
Regards,
Nick

1 thought on “Legal marijuana: The birth of a $150 billion industry”