Forget all the exaggerated claims public officials told you about CCTV cameras and public safety. Move over Vision Zero proponents because there is a new player in town.
License plate readers that can ID and fine vehicles for polluting the air will soon be coming to a city near you.
Siemens Mobility, the license plate reader company that made over €14.2 billion during the pandemic, has the audacity to try and convince the public that they are concerned about pollution in major cities.
It has taken Siemens only two years to combine license plate reading cameras with vehicle pollution sensors.
In 2019 a Siemens press release announced that they had been awarded a contract to design, supply and install a clean air zone (CAZ), ANPR camera monitoring and enforcement solution across the city of Birmingham in the United Kingdom (UK).

“Siemens Mobility’s proven Sicore II automatic number plate recognition (ANPR) cameras will be installed at carefully selected locations across the city. The cameras will identify and register every vehicle that enters the zone – 24 hours a day, 365 days a year. It is anticipated that the system will capture details of around 200,000 vehicles per day, a small percentage of which are expected to be contraventions.”

Siemens “Sicore II” marks the beginning of a new age of police surveillance. 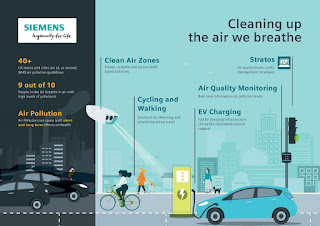 credit: Siemens
A January 2021 Siemens press release announced that they had finished installing 67 Sicore II CCTV cameras at locations throughout the city of Birmingham and needed to test them.

“Siemens Mobility has completed the installation of all 67 monitoring and enforcement cameras for Birmingham City Council’s new clean air zone. Installed at locations across the city centre, the Sicore II automatic number plate recognition (ANPR) cameras are at the heart of the scheme which is scheduled to go live on 1 June 2021.”

“Siemens Mobility’s ANPR cameras will identify and register every vehicle that enters the CAZ; 24 hours a day, 365 days a year. It is anticipated that the system will capture details of around 200,000 vehicles per day, a small percentage of which are expected to be contraventions (violations).”

“The system is integrated with the roadside sensors and ANPR cameras which form part of TfL’s existing Congestion Charging scheme. ANPR cameras identify and register every vehicle that enters the ULEZ – 24 hours a day, 365 days a year. This information is then transmitted to a dedicated and secure Siemens Mobility data center, where our ULEZ in-station software determines the compliance of the vehicle.”

“The system can process an immense volume of data, which has to be processed and stored in such a way it can be used as a basis for notifications of charges and penalties. The information the system processes must constitute a strong basis of evidence. Vehicle data from the ANPR camera network is also used by TfL for scheme analysis and reporting, and to assist with their traffic management operations.”

Also in the UK, the city of Leeds has just finished installing a large network of Siemens “Sicore II ANPR cameras around the city.
Leeds-Live said, the city spent £11.5 million on the scheme to ticket cars for polluting.

“The Leeds CAZ was announced in 2018, with the council planning to introduce charges of up to £50 a day for some vehicles after being told its air quality levels did not meet legal standards. Privately-owned cars were never going to be charged under the proposals.”

Siemens pollution ticketing ANPR cameras don’t come cheap.
The Leeds city council spent £11.5 million; £7.5 million in grants for taxi drivers to upgrade to cleaner vehicles, and £4 million on the new vehicle camera surveillance network.
As Leeds-Live points out, this is a money-making scheme designed to force drivers into purchasing new vehicles by fining them 24 hours a day, 365 days a year.

“Polluting taxis faced being charged £12.50 a day, while HGV drivers and coaches were looking at the prospect of forking out £50 a day if the CAZ was introduced. Taxi drivers were offered up to £10,000 in interest-free loans or a £1,500 grant to make the switch to cleaner vehicles, while bus operators and companies with HGVs were given more as part of a £7 million funding package.”

Not one to miss an opportunity to make a huge profit, license plate reader companies everywhere will begin retrofitting or installing pollution sensor cameras in cities everywhere.