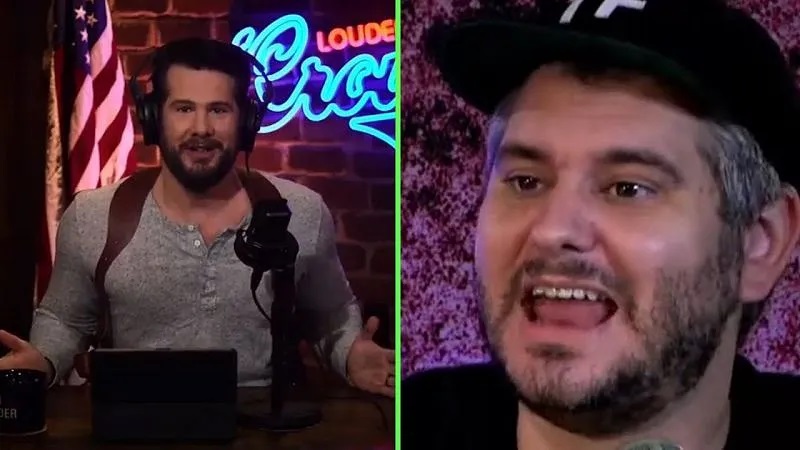 I can’t think of a situation that more expertly illustrates the complete disconnect between conservative logic and sense of principle vs. leftist duplicity and intellectual arson than the recently scheduled “debate” between Steven Crowder and Ethan Klein. In fact, I found it so compelling as a litmus test for where we are at in our political climate that I think it needs to be examined further.

For those that are not aware, Steven Crowder, a popular comedian and conservative on YouTube was engaged in a digital tit-for-tat with Ethan Klein, a YouTube meme-chaser that recently devolved into a full bore social justice statist. Klein has a big following among the tween-to-twenty crowd on YouTube, built up over the years through his earlier and more inane content. It’s hard to say what his original audience thinks of his new SJW mask, but his political observations are…well…let’s just say he’s got a mind like a rubber bear trap.

This is why his sudden invitation to Steven Crowder for a public debate was so surprising. How could he possibly hope to win? In order to win a debate, you must be right, or you must be clever enough to mislead your opponent with spin and get him trapped in the weeds until he gives up. Ethan Klein is neither of these things.

The subject matter was also universally important – The division between leftists and conservatives on the covid shutdowns, mask mandates and experimental vaccines is actually creating a form of political balkanization in the US right now. Conservatives and moderates are leaving blue states by the millions to escape the draconian lockdowns widely cheered by the political left. Many red states are now like free zones, a testament to what America used to be; while blues state citizens are perpetually wondering when they will be allowed to go back to normal, or when the lockdowns will drop on their heads again like a communist hammer and sickle.

The fact that many leftists are so blindly and idiotically accepting of everything government funded scientists claim when it comes to covid is causing rapid division in the nation (beyond the division caused by SJWs in general the past few years). They seem to be completely unphased by the numerous conflicting data points from more independent virologists and medical researchers. They merely dismiss the evidence and facts that disagree with their assumptions, deferring all liberty and all control to a handful of unaccountable bureaucrats.

In this case, though, we have to skip past the subject matter of the debate between Crowder and Klein because the debate never happened. I suggest watching the full event on YouTube (don’t worry, it was short), but I’ll summarize:

But it’s HOW he pussed out that is so indicative of the political left, because he ran from the debate while at the same time claiming “victory”. Crowder has given ample evidence on his side of things to show how the debate was set up, and frankly the outcome was at the same time bizarre and predictable.

Ethan Klein contacts Crowder asking for a debate. Crowder accepts on the condition that it’s one-on-one and there are no tricks. Ethan agrees. The debate is scheduled and the day arrives. Crowder predicts on air that Klein will do anything he can to avoid actual debate, including trying to pull a switch with another debater. Klein appears on air and proceeds to throw out odd off-topic statements, then suddenly disappears from view and is replaced by another leftist YouTuber named Sam Seder, EXACTLY as Crowder predicted. Crowder calls out Ethan Klein for his cowardice and then cuts the stream short, which makes perfect sense given that Klein proved his inability to keep his word.

Sam Seder is essentially a nobody, a flailing Youtuber with a dying channel that desperately chases recognition for the sake of recognition. He does not seem to deeply believe in much of anything other than self promotion. His scam is to goad far larger conservative channels fishing for a reaction. If he gets one, he uses it as a means to claim legitimacy. If he doesn’t get a reaction he instead claims that the person he is goading is a “coward”. It’s a classic application of Alinsky tactics,

Klein and Seder go on after the debate is cut short to proclaim “we got him”, laughing and cheering as if they accomplished something. But what did they actually accomplish besides giving Ethan Klein a way to escape a debate he was clearly afraid of? In this behavior we find the key to understanding the political left…

Here we have two leftist characters, or what I would consider leftist archetypes, that tell us all we need to know about the social justice movement and the state of the left overall. The first one is an intellectual tar pit that likes to attack his opponents but avoids any arena in which they can fight back, the second is a shameless opportunist.

The debate was established on principled grounds, a one-on-one event with some basic rules. But the leftists never have any intention of honoring the agreement. The end game for them is not to prove that they are right in their views, but to sabotage the debate itself and then crow about it to the mindless mob as if the sabotage is itself a “win”.

And so the cycle carries on into infinity, or until someone punches the cultists in their collective face and ships them off to an island somewhere in the South Pacific where they can test out their insane socialist theories on each other instead of the rest of us.

If the goal of progressives is to set every honest debate on fire with a Molotov cocktail, the truth be damned, then there can be no reconciliation with conservatives. Without reconciliation there can never be peace. The situation becomes even more explosive when one side is mostly wrong and the other side is mostly right. The only passive option that remains is to ignore each other, and since the leftist drive requires the oppression of those that disagree with them, that only leaves the final option: Violence.

The world is spinning into a vortex of totalitarianism today, and the Crowder vs. Klein YouTube drama might seem like frivolous nonsense to those of us in the liberty movement, but I think it demands our attention because it tells us where the lines are drawn. Is there even any point in debating with the left anymore? I think so, but not for their sake. Rather, the truth calls for defenders and hypocrisy needs to be answered or it will spread like a cancer into lives of innocent bystanders.

Leftists have chosen to worship the power of the lie. They see lies as magical tools to get everything they want, and most of the things they want belong to other people. This is what happens when a political or social movement builds its appeal by placating narcissists; its actions are fueled by bias and its image begins to adopt the basest and most depraved characteristics of its lowest common denominator. They seem to become tyrants, because that is what they are and what they always have been just under the surface.

The common mantra of tyrants is this:

“Those that disagree with me are wrong because I will never allow them to prove they are right. Those that defend themselves against my attacks are evil because if they fight back they might harm me. Those that demand the truth do not understand how important my lies are to the stability of the world I have built for them. Why would I engage in battle when I can get others to fight my battles for me? When people are free, it means they are free to criticize or ignore me, so I must take away their freedom, so that they are made to revere me and recognize my importance. Morals are relative and principles are for suckers. The ends justify the means, and the greater good of the greater number is paramount – And as long as I am the one that determines what the definition of the “greater good” is, then I am the one that controls everything else.”

If this doesn’t describe the political left today then I don’t know what does, other than the fact that many leftists are useful idiots for agendas that they clearly don’t understand. They are essentially tyrants that work for other tyrants, just as Ethan Klein defends frauds like Anthony Fauci that lie to the public for the sake of gathering social control.

Are people like Ethan Klein important at all in the grand scheme of things? No, not really. If the debate had actually taken place as agreed and Klein lost (as he knew he would), would it have changed anything? No, probably not. Because leftists do not lose in the sense that they admit they are wrong, nor do they learn new things which change their views for the better. The idea is to simply continue on, unabated, blind deaf and dumb to reality, and through this strategy they think can one day own the world.

If it was not obvious what we were dealing with before, the Crowder/Klein debate clarifies everything nicely. Leftist ideology is an anathema that cannot coexist with ideals of reason or freedom. One cannot debate with zealots; one can only point out their mania and prepare to fight them for the sake of future generations.