Glenn Greenwald: “if this ‘armed insurrection’ and threat of domestic terrorism are so grave, why do media figures and politicians in both parties—from Adam Schiff to Liz Cheney—keep lying about it and peddling fictions?” 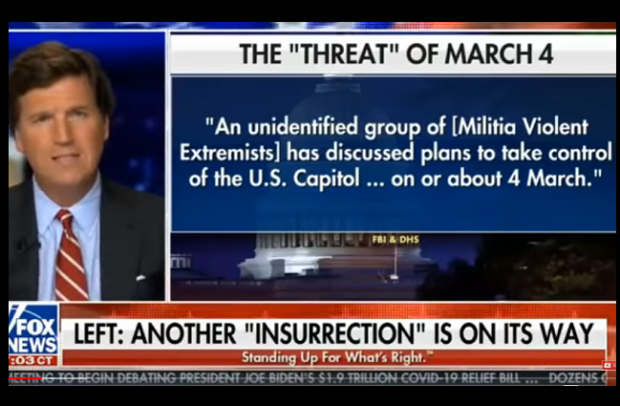 Democrats and their media cohorts are furiously trying to spin out their Capitol riots Reichstag moment by hyping lunatic conspiracy theories as if they have any basis in reality.  The goal is two-fold: demonize Republicans, particularly Trump supporters, and create a climate of fear in order to justify a new war on “domestic terror.”

However, for their fevered dreams of rampant civil rights-violating policies used against American citizens on American soil to come to fruition, they will have to come up with something better than a pretend “threat” from a lunatic fringe group.  This time the made-up insurrection against the Capitol was to take place on March 4th.  It didn’t.

In fact, so much nothing happened that the headlines warning of the March 4 armed insurrection read like ludicrous parodies of news.