– London house prices fell by 3.2% in the first quarter – Halifax
– Brexit, financial and geo-political uncertainty lead to falls
– Excluding sale of seven £10m-plus houses in London, prices were down 3.4% in the year
– UK house prices climb by just 0.4% in April, the slowest increase since 2008 for same period
– Sales transactions fall by 19% and asking versus selling prices show turning into buyers’ market
– Homeowner or not, buy physical gold to hedge falls in physical property 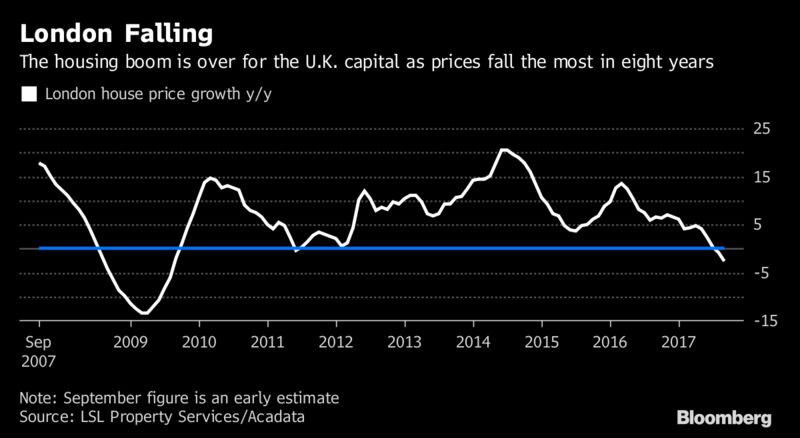 London house prices declined at the sharpest pace in nine years during the first quarter of 2018, the latest data from  Halifax shows.

London house prices fell by 3.2% in the first three months of the year according to the Halifax House Price Index. This was the fastest rate of decline since the UK and global financial crisis in 2009.

Average prices of London property continued to drop this month with house prices in the capital down by 0.6%, contributing to an overall fall of 2% for the year.

The UK property market has remained more resilient so far. The national average asking price for properties appearing for the first time was up by 0.4%. Six of the eleven major UK regions reached individual property price highs.

In London sellers are no longer achieving the asking price. The days of buyers outbidding one another seem long gone.

Anecdotally, a friend selling a 2-bed flat in West London’s Putney has had to lower the price from £595,000 to £545,000. A couple of years ago there would have been a queue around the block filled with potential buyers, armed with mortgage offers and desperation to pay ‘whatever it takes’.

My friend’s experience is worse than the data suggests. Research from Rightmove finds that sellers are achieving 95.6% of the asking price, with an average loss of £27,442 based on the average London asking price of £628,039. The difference reflects the ‘cloud 9’ approach of sellers who are yet to come to terms with the fact that buyers can no longer afford to pay any asking price.

By way of comparison the national average loss is £10,000, or 96.7 per cent of the final asking price. A difference of 1.1% between the two groups (London versus national) is not that dramatic and perhaps suggests than London is the siren call for the rest of the UK.

The fall in the London boroughs appears to be concentrated in the central areas of the city and outer boroughs are yet to feel the tightening. This is most likely due to the ripple effect.

The worries surrounding Brexit, stamp duty and interest rates will eventually be felt everywhere. This is regardless of how and when inflation really begins to bite. 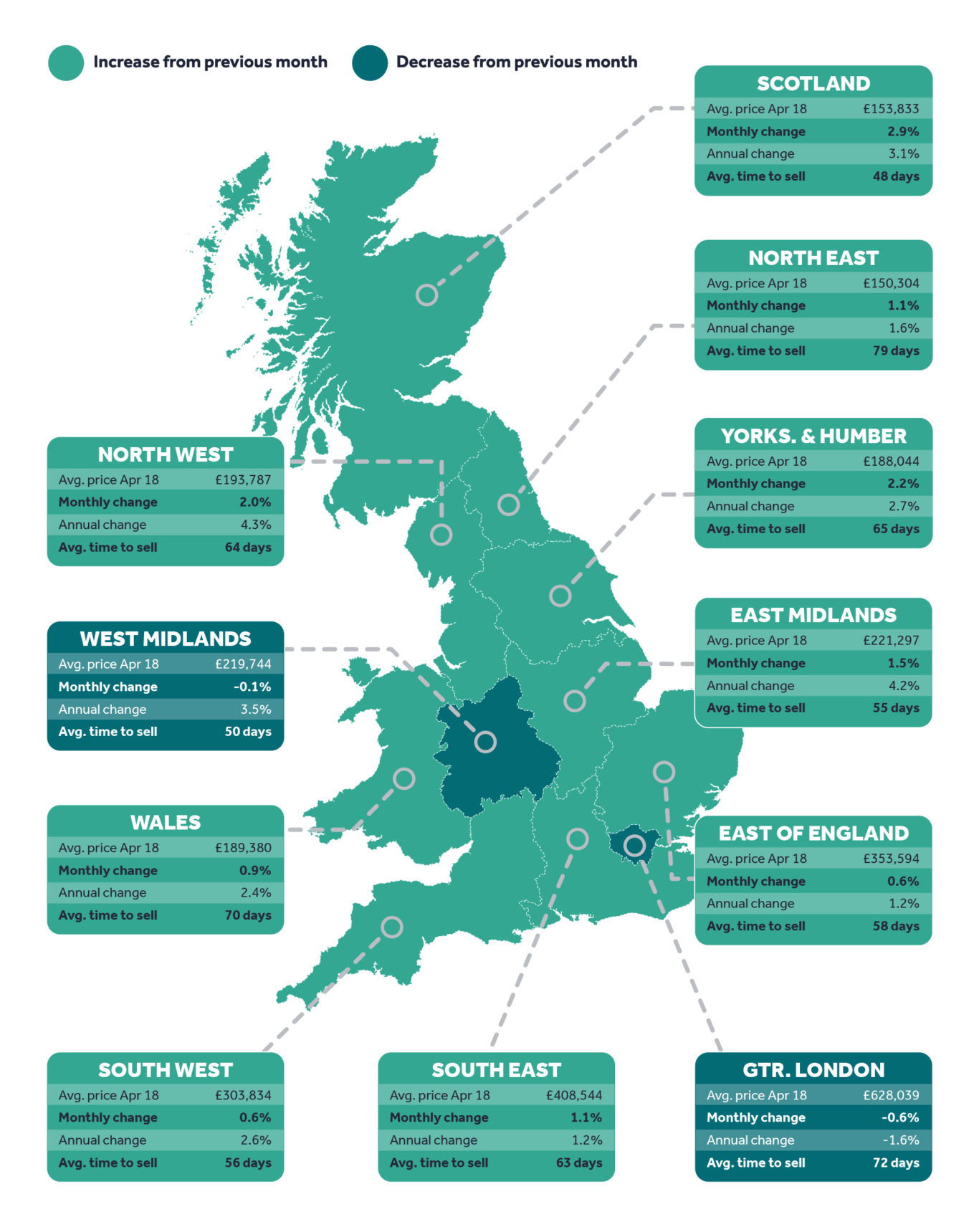 The strong performance by the rest of the UK may be seen as something to celebrate by those angry about the north-south divide. In reality history and data suggests this is not a sustainable situation for the long-term.

As we have already seen in London, home buyers will becoming increasingly stretched as prices climb. Wages are certainly not increasing but interest rates are.

The 0.4% increase in house prices was down significantly from the 1.5% climb seen in the previous period, perhaps a reflection of a changing and pushed market.

The property correction, and potentially crash, has started closest to the centre of the capital first. Soon a ripple effect will likely play out.

Many of the factors felt by central Londoners will also be experienced by the rest of the UK. Brexit, interest rate climbs or stamp duty rises make this likely. Brexit may be felt more keenly in the capital but this will set the tone for the rest of the country.

Banks are feeling financial pressures and the jobs market is certainly not suggesting to anyone that wages are on their way up. None of these are London-exclusive problems.

Throw in Brexit and you’ve just served up uncertainty on a platter for the entire UK.

In the short-term it may well remain a sellers’ market. There are still some property shortages across the country. Brits remain instilled with the psyche that it is better to own a home than to rent one. Earlier this year first-time buyers reached 10-year highs, ‘thanks’ to help-to-buy and shared ownership schemes. With interest rates set to climb further and stamp duty here to stay we may see a surge from first time buyers keen to jump on the housing ladder before it becomes even more unaffordable.

Rightmove and propertywire, explain the key differences between the property prices, lead by first-tme buyers:

The index also shows that typical first time buyer properties with two bedrooms or fewer are up by 2.2% average year on year, while the sector favoured by second steppers, mainly comprising three bedroom properties, rose by 2.7% rise.

In contrast, the more expensive top of the ladder category, typically detached with four bedrooms or more, has a more muted annual rate of increase of 0.9% and is still behind its peak set in October 2017 of £542,347.

‘In the more popular locations and for the property with the right specifications, buyer demand is helping to push prices higher. A lack of choice is nudging prices up to test the ceiling of what the market will pay,’ Shipside pointed out.

An abundance of houses or not, if they are unaffordable then there won’t be much demand for them.

See also  US Workers Made Only 8 Cents More Per Hour, Inflation-Adjusted, Than In January 1973 (While Real Home Prices Soar)

Whilst the government is apparently working to increase the number of new homes, it may be too little too late. A housing shortage was not the driver of the housing boom. It was easy money and easy lending and those days are rapidly coming to an end and there are consequences to the age of frivolity by mortgage lenders and over-stretched buyers.

London should not be seen as the outlier when it comes to property prices. It just feels change more acutely than the rest of the UK. Investors and analysts should see it as an only partially effective shock-absorber or airbag.

A crash appears likely. As ever, those who are diversified and own gold will weather the storm better than those who do not.

It’s easy to think that you are immune from a housing market crash if you are not a property owner. Sadly there are few who will be unaffected by a fall in property prices. So ingrained is the debt-fuelled housing market in our economy that all investors, savers and consumers are exposed.

Whilst the crash in house prices looks inevitable, it may not be imminent. The slow collapse in the London housing market has been ongoing since before the Brexit referendum, as buyers face the reality of reduced real wages and increased interest rates.

Investors and savers should hedge themselves by allocating a sensible proportion of their portfolio to the only real counter-party free asset – gold and silver bullion coins and bars.

Barclays: Geopolitical Risk Is Back To Cold War Highs (ZeroHedge.com)

Does The “Normalization” of the Fed’s Balance Sheet Signal the Next Asset Collapse Has Begun? (Econimica)

Greece Back in the Spotlight (Bloomberg.com)