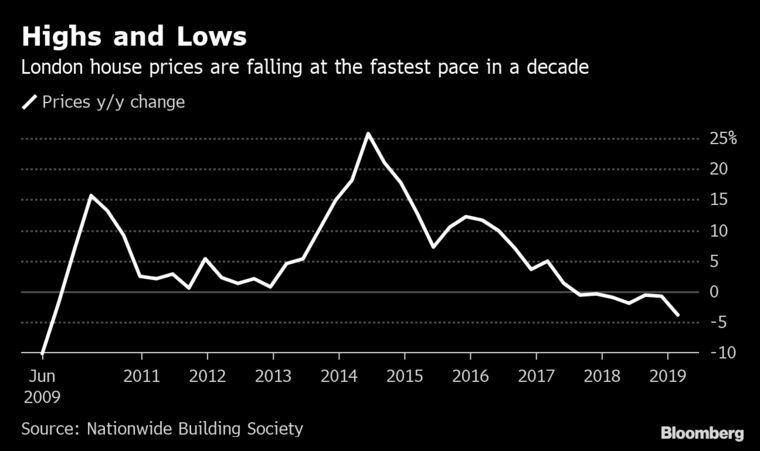 London continued to lead the U.K.’s weakening property market at the start of 2019, with prices falling the most since the financial crisis a decade ago

Nationwide Building Society said Friday that values in the capital dropped 3.8 percent year-on-year in the first quarter. That’s a seventh straight decline and leaves London as the worst-performing region in Britain.

Some of the weakness relates to Brexit, which is having an impact on sentiment. Consumer confidence remains close to its lowest level since 2013, according to GfK.

The Bank of England said on Friday that mortgage approvals dropped last month. Business investment fell for a fourth quarter at the end of last year, the statistics office said in a separate report.

The uncertainty over when and how the U.K. will leave the European Union has gotten worse this month as the government extended the deadline, having so far failed to get lawmaker approval for its exit deal. Still, a shortage of homes, record employment and low interest rates are preventing an even sharper downturn in the property market.

Nationally, property values rose 0.2 percent in March from February. The annual rate of change improved to 0.7 percent from 0.4 percent, though Nationwide said the market remains “subdued.”