Selling weapons to other countries is big business. It’s so lucrative that President Trumpfamously refused to cancel an American arms deal with Saudi Arabia in the aftermath of Jamal Khashoggi’s murder. So just how big is the international market?

The Stockholm International Peace Research Institute (SIPRI) and the World Bank keep detailed figures on international arms imports and exports, counting every major conventional weapon from missiles to radar systems and military airplanes. We used the latest available complete data, sometimes going as far back as 2016 for some countries, to create a unique set of maps. The larger a country appears, the more arms it imports or exports. Plus, we added a color-coded outer ring corresponding to the level of each country’s contribution.

Let’s start by looking at who’s selling the most weapons. The U.S. stands out as the world leader by a long shot, shipping well over $12B in arms to other countries. To be sure, a significant amount of American arms exports go to Israel, but there are several other large customers across the Middle East as well, like Saudi Arabia, Egypt and the UAE.

To understand the extent to which Americans dominate the international market for weapons, just look around the world. The second most prolific exporter, Russia, only sees half as much business ($6.15B). France ($2.16B) is the only other country topping $2 billion, with the rest of the major players from Western Europe contributing less. Israel for its part is actually a net exporter of arms ($1.26B exports vs. $528M imports). And China, despite being the second largest economy in the world, only exports some $1.13B. There is only one country from Africa on our map (South Africa at $74M), and only a couple from Latin America. This means that developed countries in the West are, by far, the biggest exporters of arms around the world. 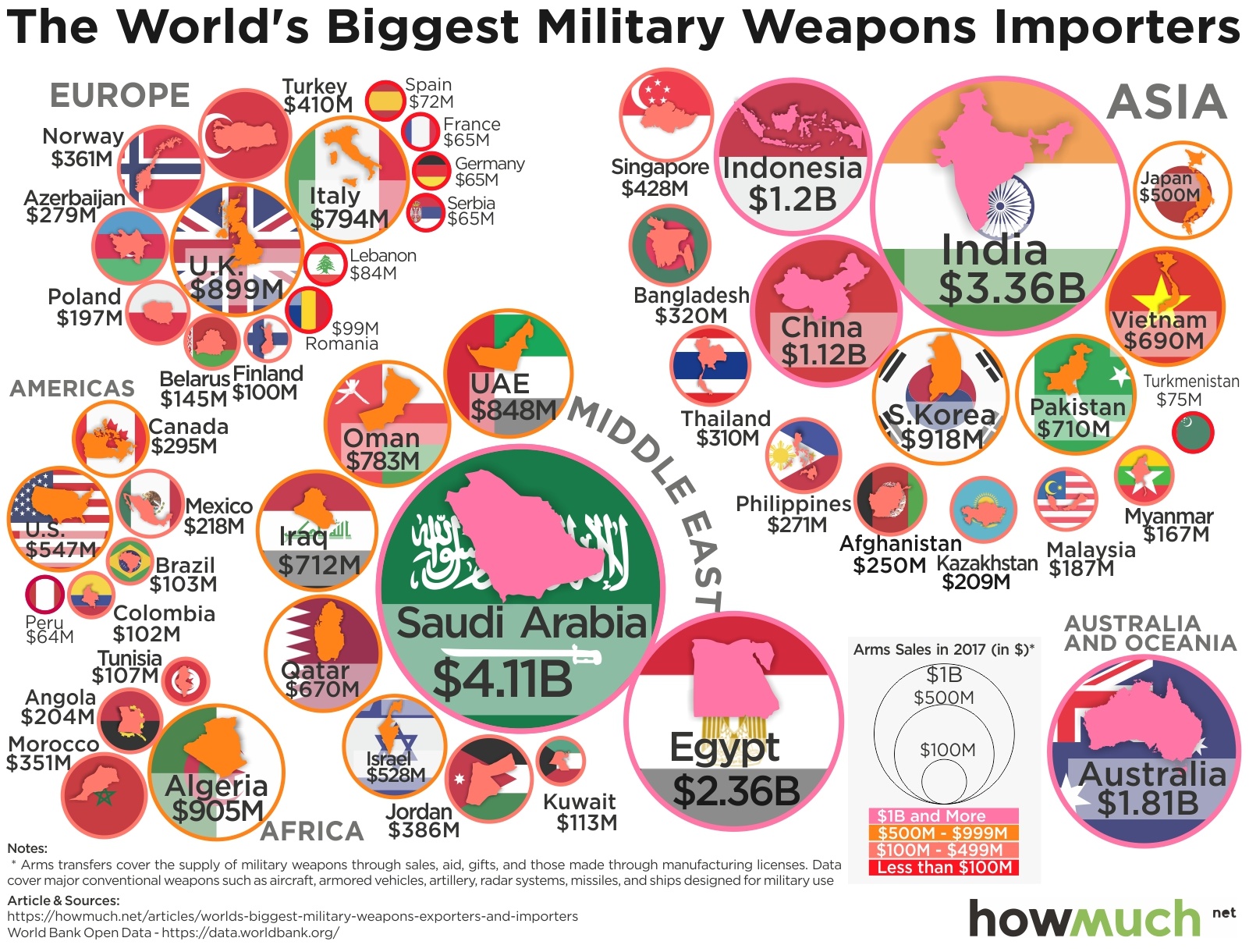 But let’s see who’s buying all those weapons. The world map of importers looks radically different from the exporters. For starters, Saudi Arabia and India are major players, soaking up some $4.11B and $3.36B of the market, respectively. Each country is surrounded by a smattering of other countries making big purchases too.

There are lots of reasons why some countries are major importers. There’s efficiency in a global market where a country can simply purchase weapons as opposed to manufacturing everything at home. Why would Australia, for example, try to build military aircraft when it can simply buy them from the U.S.? There are also lots of regional conflicts pressuring countries to spend top dollar for the latest military technologies, like India and Pakistan. And then there are a number of disreputable countries led by strongmen or oligarchies. They have their own agenda, and clearly they’re willing to spend big bucks for the best weapons.