Manhattan real estate had its worst first quarter since the financial crisis, capping the longest losing streak for sales in over 30 years, according to a new report.

Total sales fell 3 percent in the first quarter, according to the report by Douglas Elliman and Miller Samuel. That marked the sixth straight quarter of declines, which is the longest downturn in the three decades that the appraisal and research firm has been keeping data.

The drop stems from an oversupply of high-end apartments, a lack of foreign buyers and the new federal tax law that has hit real estate in high-tax states. A new “mansion tax” approved by New York state legislators over the weekend will layer another tax on the sale of multimillion-dollar homes and add further pressure to a market already under stress, according to real estate experts.

See also  What If REAL Mortgage Rates Were Based On Real Estate Inflation Rates? How About -13.815%?

The pain is being felt at all levels. While the entry-level market in New York, below $1 million, had been holding up for most of the past year and a half, it has started to suffer as the trouble at the top cascades down.

“It’s like a layer cake,” said Jonathan Miller, CEO of Miller Samuel. “When you have softening at the top, it starts to melt into the next layer and the next layer after that, because those buyers further down have to compete on price.”

Prices in Manhattan continue to remain soft. While the average sale price got a big boost from hedge fun billionaire Ken Griffin’s $238 million condo purchase, hitting $2.1 million, the median sales price in Manhattan declined slightly, to just over $1 million. Griffin’s purchase was part of a more than $700 million spending spree the CEO and founder of Citadel has been on in recent years, as he’s scooped up homes in Chicago, Miami and London.

See also  US June New Home Sales Disappoint, Down 6.6% Since May (Median Price For NHS Drops 5%) 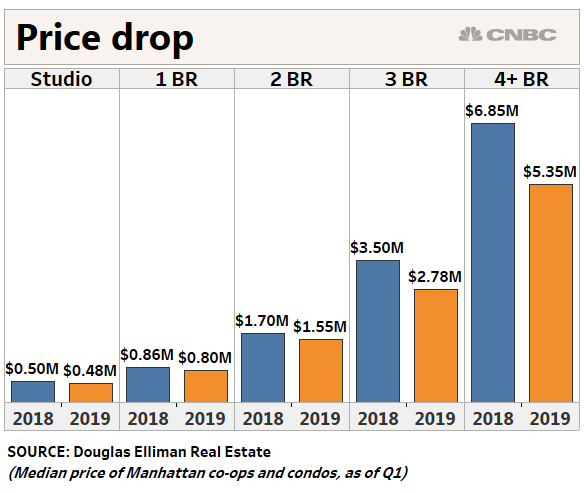 Sellers who still have unrealistic price expectations are the biggest barriers to sales, brokers say. That has led to more listings piling up and sitting on the market for longer periods. There is now a nine-month supply of homes on the market, with inventory up 9 percent. The glut in new development is even worse: The supply of newly built condos jumped 56 percent over last year, to a 19-month supply. 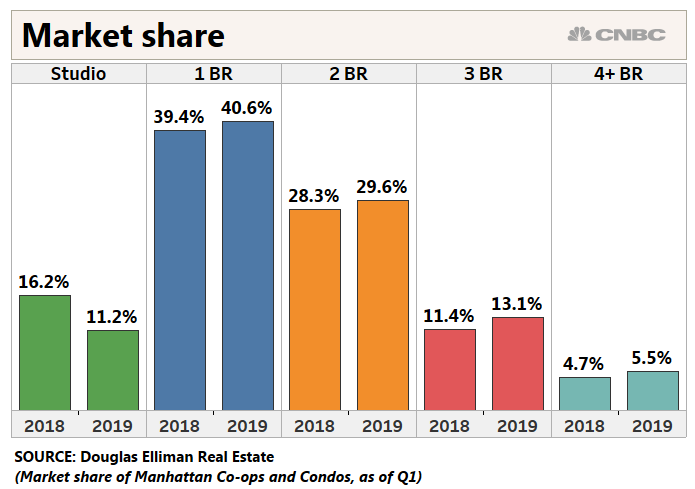 Miller says the outlook for the year is unlikely to improve — especially with the new mansion tax.

“The market continues to be vulnerable to challenges,” he said.