News about public companies often dominates conversations about the economy, including which new companies have launched IPOs, which companies have reached a $1 trillion market cap, and which public companies are the largest in the world. But what about private companies, which don’t have any shareholders or stocks to trade on the market? We used data from Forbes’ ranking of America’s Largest Private Companies to illustrate the largest private company in each state. Our findings are in the map below. 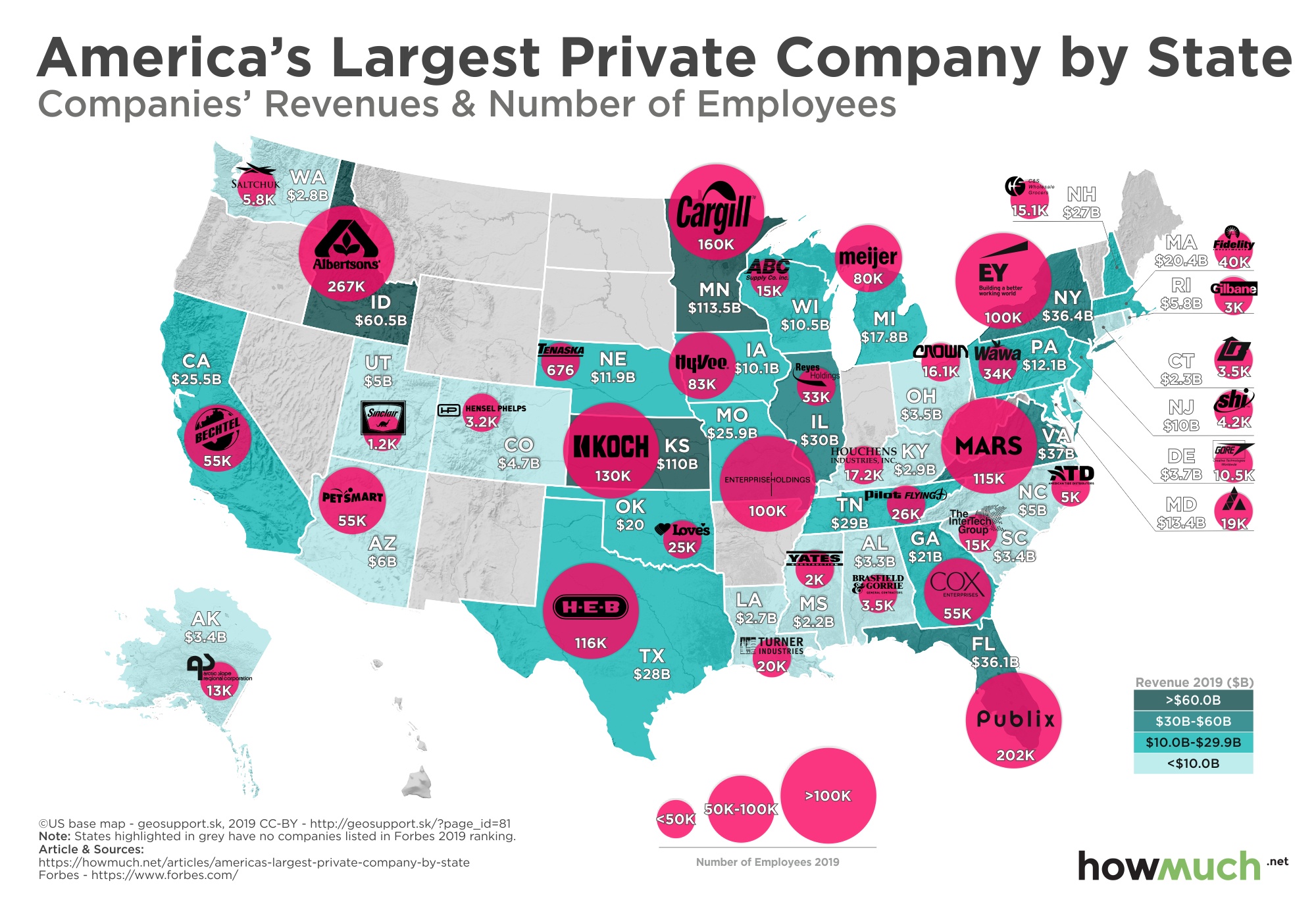 Forbes provided the list of the largest private companies by revenue, and for this visualization, we picked the biggest company by revenue for each state. According to Forbes’ methodology, all companies must have at least $2 billion in revenue and 100 employees. The ranking excludes auto dealerships, real estate investment or management firms, companies that don’t pay income tax, mutually owned companies, cooperatives, and companies that are more than 50% owned by another public, private or foreign company. The largest public companies per state are represented by large pink circles with the company logo, situated next to each respective state. The size of the circle corresponds to the number of employees at the company, with larger circles representing larger workforces. In addition, each state in the visualization is color-coded in a shade of turquoise. The lighter shades mean that the state’s largest public company has lower revenue compared to the others, while the darker shades indicate that the state’s largest public company has higher revenue.

Many of the companies on this list appear in other rankings, too. The Koch family, which owns Koch Industries, the second-largest private company in the U.S., is the third-richest family in the world. In addition, some of these companies, such as Publix and Mars, are also listed among the best employers in America according to Fortune.

While private companies may not be as sensitive to the ebb and flow of the stock market when compared to public companies, broader events happening in politics and the overall economy can still have an effect on the bottom line. For a political example, cyberspace is the next front in Iran-US conflict – and private companies may be most at risk of cyberattack. For an economics example, the preference of many companies to leverage private equity to raise funds rather than go public has affected buyouts, mergers & acquisitions, and even the number of employees that the company can hire.

Do you think any of these private companies will go public in the near future? Why or why not? Let us know in the comments.