Forget the top one percent. The 25 richest people in the world belong to an ultra-elite group of families who control astonishing amounts of wealth. But where do these families come from? And who has the most dynastic wealth? 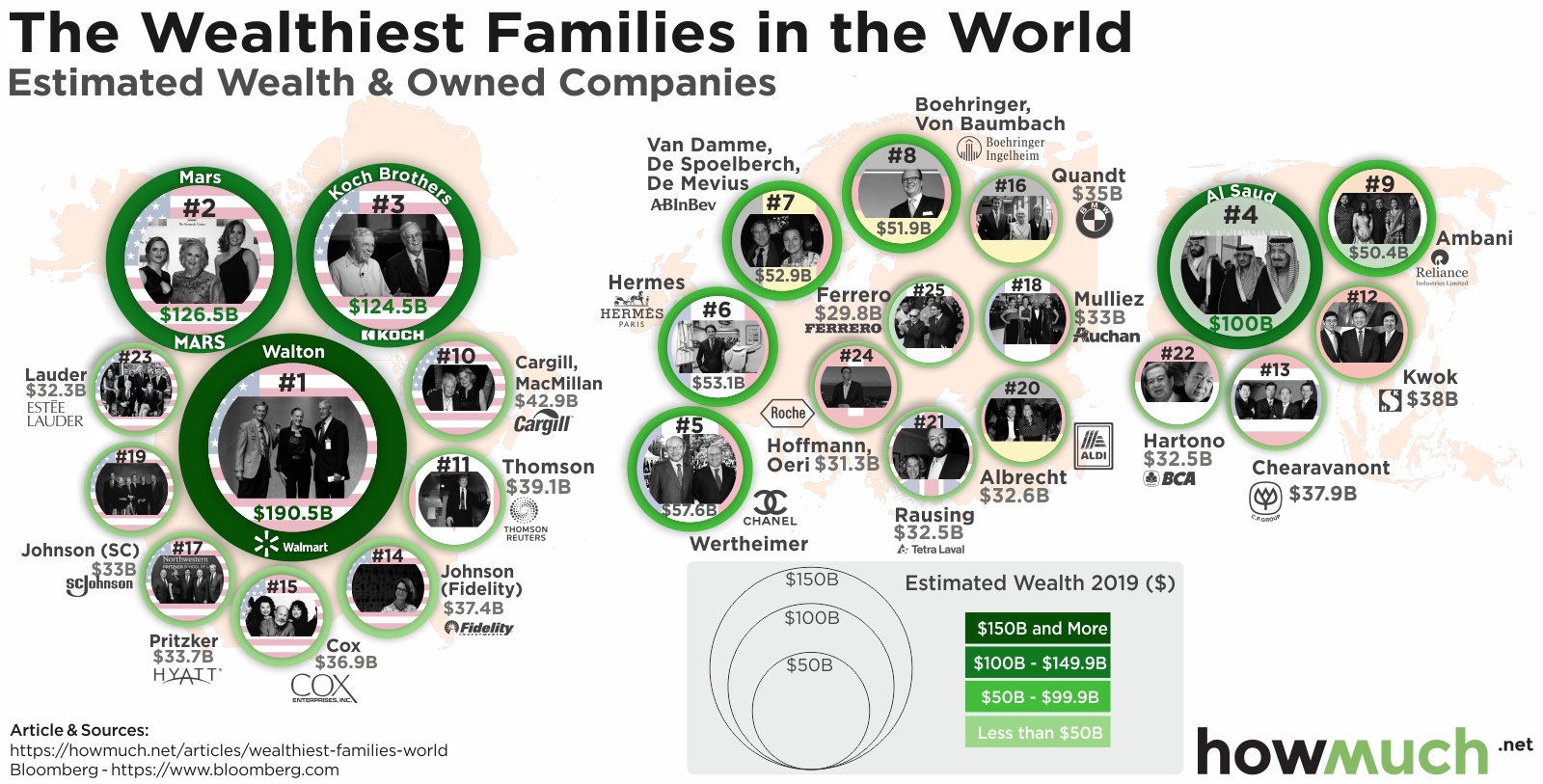 Top 10 Richest Families in the World

Most of the world’s wealthiest families reside in the northern hemisphere: our top ten list features four families from North America, four from Europe and two from Asia. American families take the top three positions with the Walton, Marses and Kochs, respectively. The Waltons, of Walmart fame, retain a majority stake in the company founded by Sam Walton in 1962. This allows the family to maintain considerable control of the company’s strategy, and its profits: the family becomes a staggering $100 million wealthier every day from their stake in the family business. In close competition for the number two spot (indeed, their positions were reversed last year) are the Mars and Kochs family. The latter had a death in the family this year as Koch Industries co-founder David died in August, leaving his wife Julia and their three children an estate that CNN valued at $47.5 billion in 2015.

A newcomer to Bloomberg’s list this year is the Al Saud royal family of Saudi Arabia. While the wealth is estimated based on payouts from Saudi Arabia’s executive office of the king, the Royal Diwan, Bloomberg concedes the estimate may be too low — after all, the state-owned Saudi Aramco oil company is the world’s most profitable company. Saudi Aramco, which has recently been taken public, did not perform quite as well as expected by Saudi Crown Prince Mohammed bin Salman, and shares have dropped an additional 10% from the IPO high amid tensions between the United States and Iran.

So, how do these family fortunes compare to that of the Trumps and the British royal family? The London Evening Standard put the worth of the entire royal family in 2019 at $88 billion. This estimate would put the Windsors squarely in the top five wealthiest families. So why are they missing from the list? Well, as Bloomberg’s methodology states: “clans whose source of wealth is too diffuse or opaque to be valued are excluded.” As for the Trumps, Business Insider put their wealth at $4 billion: that’s still quite a sum, but it pales compared to that of the Walton or Mars family fortune.

Which of these family fortunes are new to you? Is wealth inequality a concern to you after reading these statistics? Let us know in the comments and share with your friends.