Who doesn’t think firefighters are national heroes? They work long shifts, maintain a high level of specialized skills, and risk their lives at a moment’s notice for the public good. Despite their popularity, did you know that many firefighters don’t make a living wage? In fact, how much they earn varies wildly around the country. 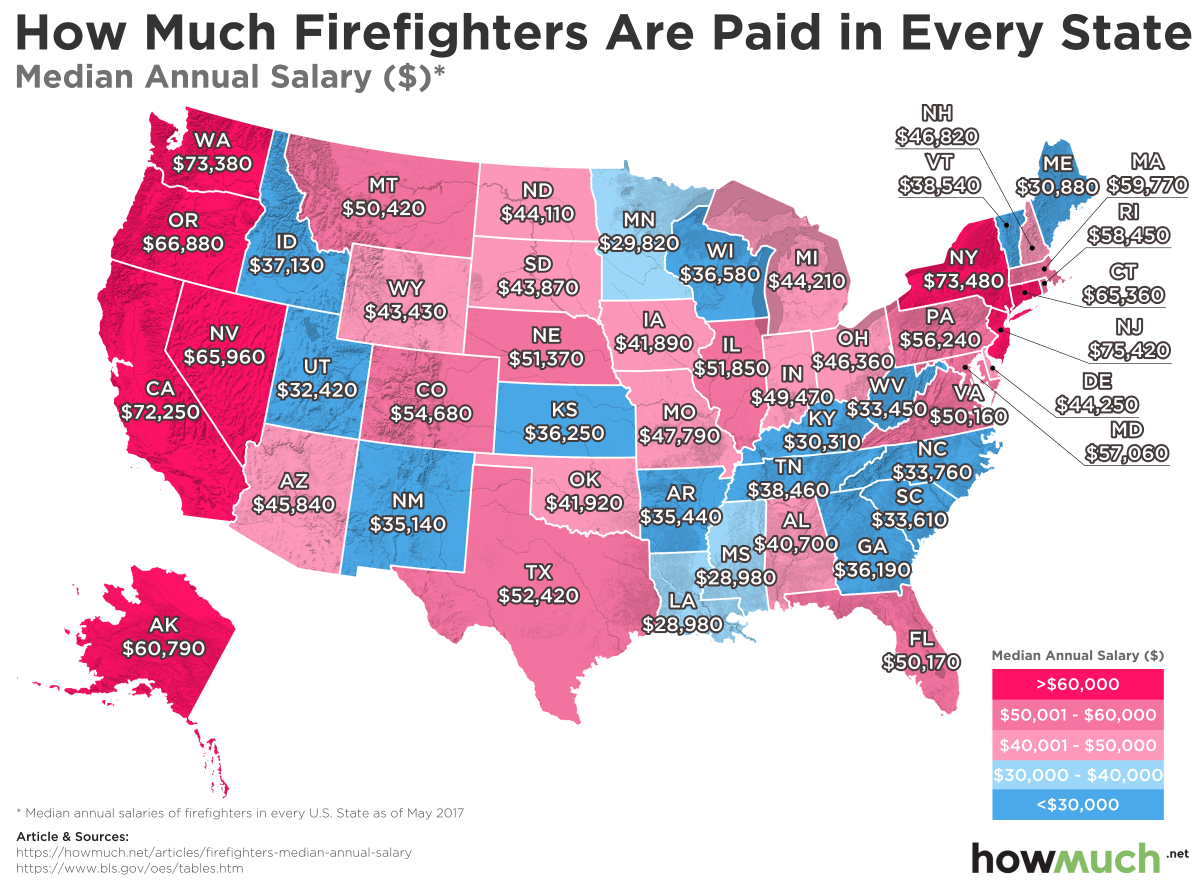 We gathered the data for our latest map from the Bureau of Labor Statistics (BLS), which publishes a wide variety of employment and economic data. We took the median annual salary of firefighters in every state as of May 2017 and created a color-coded map, highlighting the states that pay the most (and least) for professional firefighters. Median salary figures are a powerful way to understand how much most people make—half of all firefighters make less than the median amount, and half make more.

These are the ten states that pay the least amount of money for firefighters in the country. To put these numbers in perspective, the federal poverty level for a family of four is$25,100.

Analyzing our map of firefighter salaries reveals three key dynamics: state expenditures and politics, how often firefighters are called into action, and what exactly firefighters do. Let’s take each dynamic in order.

First, our map highlights how state governments spend money depending on which political party controls the local government. That is, Republican administrations tend to hold down public expenditures, and Democratic ones tend to spend more on public services. To see this dynamic in play, compare our map to the states where one political party controls all branches of state government, known as the supermajority trifecta. There are a group of states concentrated primarily across the South where firefighters earn relatively meager wages. Led by the state of Louisiana where they take home only $28,980, many states across the South simply refuse to pay a living wage to these brave men and women. Conversely, West Coast states (which Democrats control) spend the most on firefighter salaries. There are certainly a few notable exceptions, like Minnesota ($29,820) and Vermont ($38,540), but the rule generally applies across the country.

Another way to think about firefighter salaries, other than politics, is to consider how often they are called into action. There’s a massive smog problem right now across several Western states because of forest fires, and you can bet the firefighters living in those states have significantly more work to do than in the South or Midwest. In other words, the cluster of states out West may have more to do with the environment and how many times firefighters are called into action than politics. Also, consider the role firefighters play in responding to natural disasters and terrorist attacks. New Jersey ($75,420) and New York ($73,480) pay the most money for firefighter salaries not just because they are expensive places to live. Firefighters are among the frontline emergency responders called to action when the unimaginable happens, and perhaps as a result they command higher salaries in these places for their efforts.

READ  American Thinker: Every Democrat with any self-awareness at all is defecating in his pantaloons over the Arizona audit, over which they have lost control and they know it. If it turns out the way the red half of the country expects it to, the Dems are cooked.

And finally, another way to think about our map is to consider why anyone would accept relatively little compensation for risking their lives. Part of it has to do with the promise of full pensions at a relatively young age. In exchange for accepting relatively low pay now, many public workers believed they would get defined-benefit public pensions backed by taxpayers. But as it turns out, states and municipalities simply don’t have the money to make good on their pension promises, leaving many firefighters with no alternative resources. Indeed, why would anyone accept $30,000 for such a dangerous job with no long-term financial security?