The U.S. has both the highest incarceration rate in the world and more people are in U.S. prisons than any other country. That means that Americans spend a lot of money caring for and maintaining prisoners, but just how much depends on where you live. 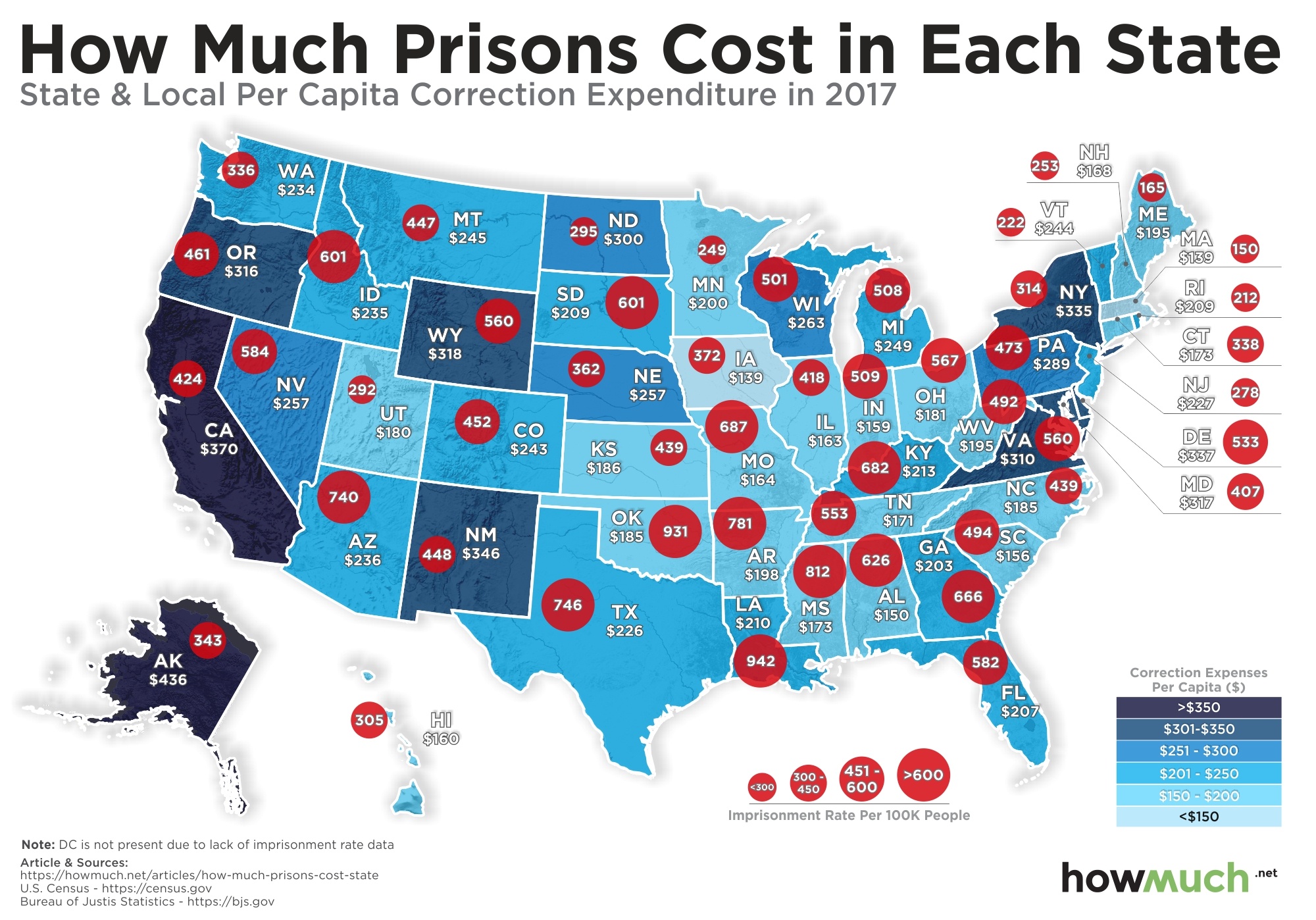 We compiled the data behind our map from a few different sources. First, we gathered population estimates from the U.S. Census for 2017. We combined this information with a separate report on the cost of imprisonment and an analysis on the imprisonment rate from the U.S. Justice Department. This let us create a visual showing which states put the most people in prison (the size of the red circles) and how much they spend on prisoners (the shade of blue).

Top 10 States with the Highest Imprisonment Rate (per 100K People)

Top 10 States Spending the Most on Corrections per Capita

It’s not surprising that Alaska stands out as the leader in per capita corrections expenses ($436). After all, there’s a baseline amount of money needed to build and maintain prisons, and not very many people live in Alaska to pay the bill. However, California ($370) is by far the most populous state in the country with over 39.5M people calling it home. That means Californians spend a lot of money, substantially more than any other state, on corrections.

There is a clear group of states across the South that spend relatively little on prisons but which imprison a lot of people per capita. These are states colored light blue with large red circles. In short, relatively more people are going to jail in these places than elsewhere, and policymakers spend less money taking care of them. In fact, Lousianna throws more people in jail per capita than anywhere else (942). The top ten states with the highest per capita rate of imprisonment are all in the South. Many of these same states are also among the bottom ten in correction expenses per capita.

There are a lot of consequences to having so many prisoners but spending so little money on their maintenance. Jails become overcrowded and understaffed. A recent civil rights investigation from the U.S. Justice Department found severe problems and gross human rights abuses, and our map no doubt points to part of the problem.

Gallup recently found that most Americans believe crime is a serious problem, despite how both the imprisonment and crime rates are dropping. Is it worth it to spend so much money on prisoners? How can we avoid human rights abuses without raising taxes to pay for prisoners? Let us know your thoughts in the comments.