Have you ever wondered how much the highest-paid CEO in your state makes for a living? It turns out that climbing to the top of the corporate ladder can mean dramatically different things in different parts of the country. Our new map breaks down the highest-paid CEOs in each state, letting you easily see total compensation figures and the companies they work for. 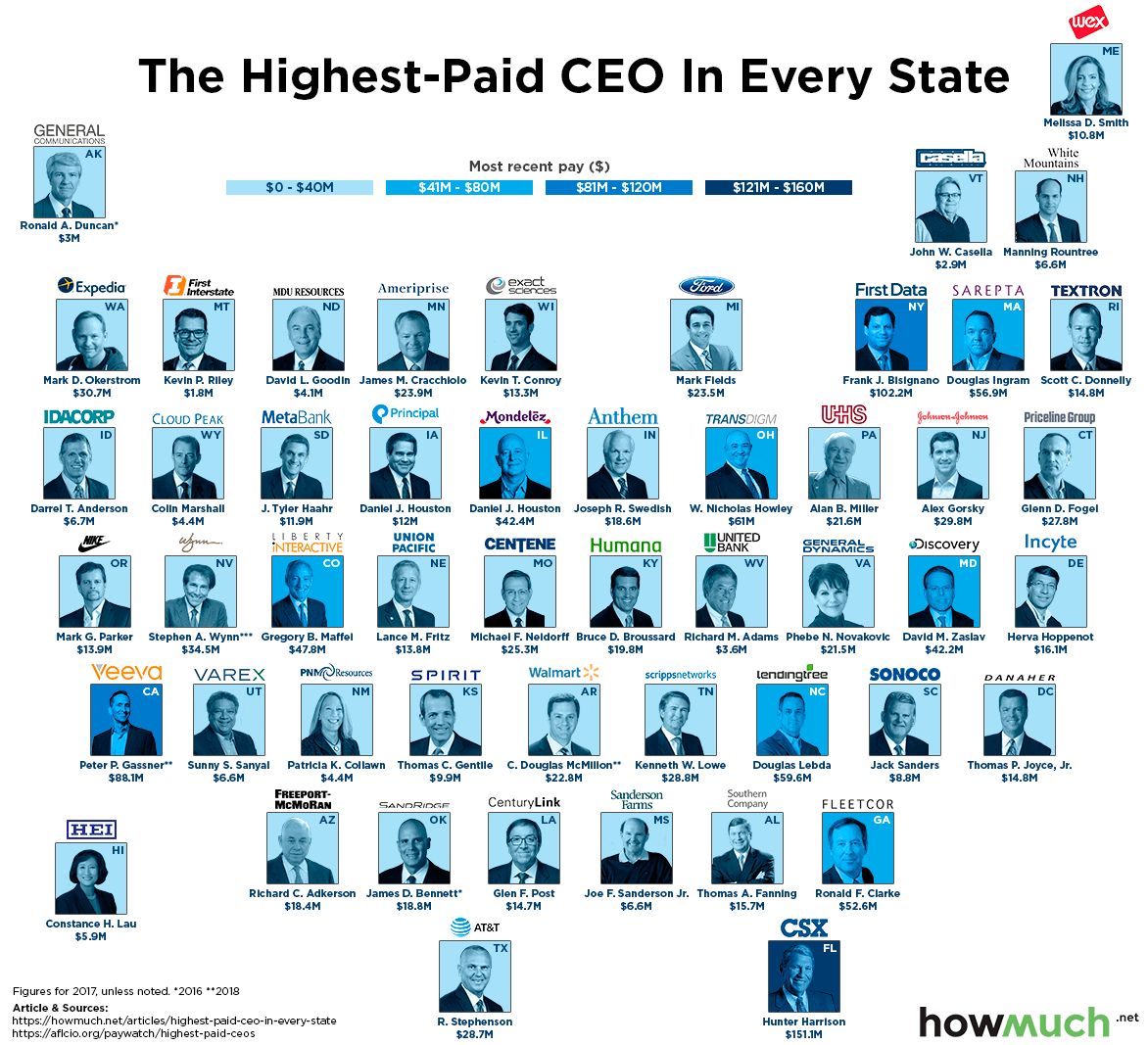 We took compensation numbers from the AFL-CIO’s Executive Paywatch project and replaced each state on a map with a photo of the highest-paid chief executive, together with their employer’s logo. We then color-coded each photo to indicate how comparatively high or low their income ranks—the darkest shade represents over $121M; the lightest shade up to $40M. This approach gives you a quick snapshot of the geography of executive compensation across the U.S.

These are the ten states topping the list on our chart with the highest paid CEOs ($M) (all figures represent 2017 compensation totals unless otherwise noted):

This first and most obvious thing our map demonstrates is the wide disparity in executive compensation at the top of the corporate ladder. Hunter Harrison from Florida’s CSX Corporation pulled in $151.1M, about 50% more than the second-place earner, Frank Bisignano from First Data at $102.2M. At the opposite end of the spectrum, Kevin Riley “only” makes $1.8M at Montana’s First Interstate BancSystem. Think about it this way: Kevin Riley makes more than 38 times the average American salary of $46,641, but Hunter Harrison made more than 83 times as much as Riley! In short, executive compensation skyrockets depending on a number of factors, but the figures definitely tend to reflect the economic status of the U.S. in general, varying widely based on location.

At a macro level, our map highlights the fact that the highest-paid CEOs are clustered in a select few coastal states. CEOs living along the Atlantic Seaboard generally make the most. In fact, there are only two states west of the Mississippi where the top-paid CEO makes over $40M: Gregory Maffei in Colorado ($47.8M) and Peter Gassner in California ($88.1M as of 2016). Also of note, almost all the CEOs on our map are white men, and only a handful are women. This is additional evidence in support of the hotly-debated gender and diversity pay gap within boardrooms in corporate America.

There are a couple of key caveats to keep in mind. Companies pay their executives with more than just simple cash salaries. The numbers behind our map might include vested company stock, unvested stock, other stock options, private security detail, or the use of a private jet—all these things factor into overall CEO compensation. You may have also noticed that high-profile CEOs like Jeff Bezos, Elon Musk, and Warren Buffett are missing from our list. That’s because they own large parts of their companies, so they don’t take a salary the same way these CEOs do.

Want to learn more? A new SEC ruling now requires companies to disclose the average pay gap between CEOs and workers at each company. Check out our other articles detailing companies with the best and worst pay gaps in the country.