The coronavirus has created a fascinating paradox in the economy. On the one hand, millions of Americans are out of work, supplemental unemployment insurance is now only $300 per week, and Congress can’t agree to pass a new relief package. And yet the stock market is at an all-time high, and some of the richest people in the world have therefore seen their fortunes surge, as our latest visualization makes clear. 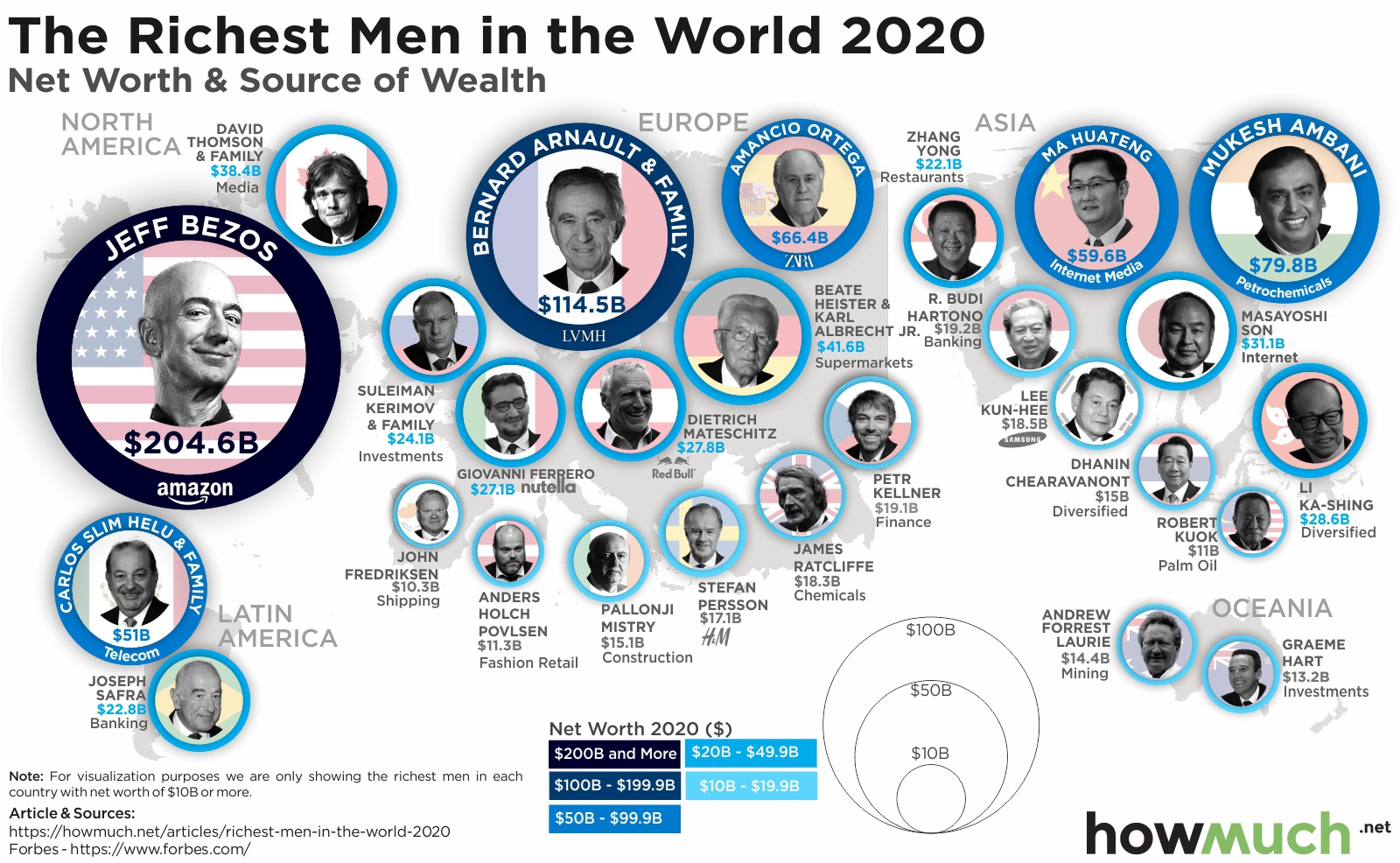 We found the data for our visualization of the richest men at the real-time billionaire tracker from Forbes, which measures the approximate daily fluctuations in wealth across the world’s richest people. We previously analyzed the richest women in the world. We took the pictures of the richest men in the world and placed them on the map, limiting our work to just those with a fortune of $10B or more as of September 1, 2020. Then, we sized each photo to a bubble corresponding to the size of their fortune, creating an intuitive snapshot of the world’s wealthiest men in 2020.

Top 10 Richest Men in the World

The top dog by a long shot is Jeff Bezos, the founder of Amazon, who has a personal net worth of some $204.6B. Since our ranking can only account for one person per country, we had to exclude Bill Gates ($118B). The only other person controlling over $100B in wealth is Bernard Arnaul from LVMH, which owns brands like Louis Vitton. The wealth distribution across our ranking then starts to flatten out with four more men who have amassed fortunes over $50B, including Carlos Slim ($51B). In fact, a main takeaway from our visualization is how billionaires can come from a variety of different industries, including telecoms, banking and media.

Another key insight is how unevenly distributed the wealthiest billionaires are from a geographical perspective. There are only two entrants from Latin America. There is literally nobody in Africa with a personal fortune of over $10B. The same can be said about the Middle East. This means that developed economies in the U.S., Europe and Asia produce a lot more insanely wealthy people than the rest of the world.

To be fair, there are some complications to keep in mind. Some of the individuals pictured represent the head of a family with a ton of money, like Carlos Slim Helu, whose family controls a telecom conglomerate in Mexico. It is also inherently subjective to measure wealth if a lot of it is spent on things like real estate and artwork. It’s also important to mention how some famous billionaires, like Bill Gates, spend their time and fortune on making the world a better place, like finding a coronavirus vaccine, which in effect intentionally depresses their total net worth in rankings like this one. And of course someone like Jeff Bezos has billions of stock in Amazon, which is surging in value right now thanks to the coronavirus.

When do you think someone will be worth more than $300B? Will it be Jeff Bezos? Let us know in the comments

Do you need insurance for your business? Don’t worry, we’ve got you covered.