Isn’t Wednesday’s accelerated upswing too good to be true? While I have no doubts about stocks being in a strong bull market, isn’t a bit than stellar path ahear in the coming day(s)?

Yes, still before the month of October, which appears to me to be the prime candidate for a down month. Let’s check whether the shallower gyrations I look to see in September, are drawing really near, or not yet.

The recovery looks a bit weaker than it was months and weeks ago, underscoring the need for stimulus. Yes, it’ll arrive before the elections, and it’s not only the job market that needs it. Taking long profits off the table such as earlier today, makes sense from the risk-reward perspective. It isn’t necessary to be always invested – especially not at moments that can usher in a short-term downswing after such a stellar run. A bird in the hand is worth two in the bush. 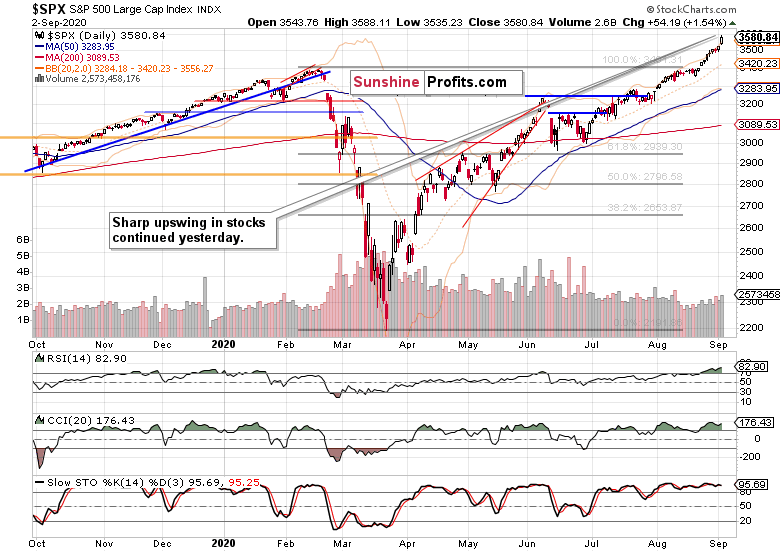 Latest two sessions were really strong days in the S&P 500. Not a sign of reversal, but doesn’t it feel like a buying climax in the short-term? Yes, the volume isn’t there to declare it one, but it smacks of one still.

Do the credit markets point either way? 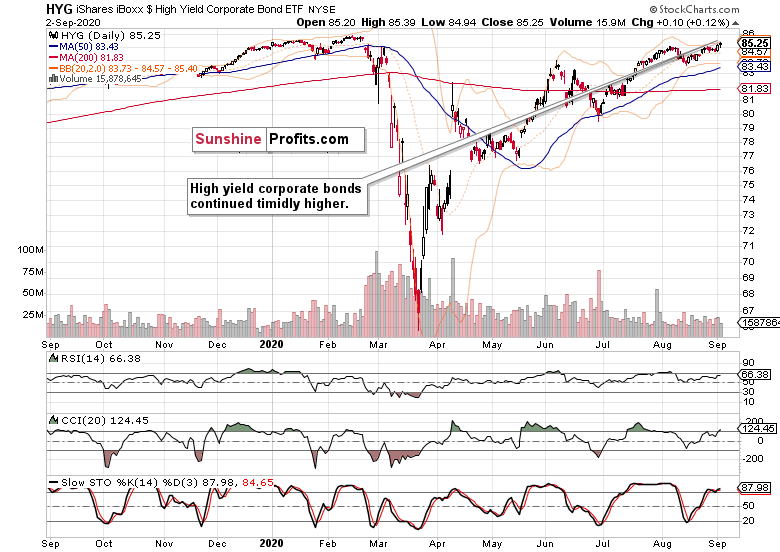 The Credit Markets’ Point of View

High yield corporate bonds (HYG ETF) also rose yesterday, but the upswing is nothing to call home about – especially given the lower knot. Declining volume points to a breather before a larger move in the ETF. And given another strong day in investment grade corporate bonds (LQD ETF), it’s likely going to be eventually higher.

Both leading credit market ratios (please see this and many more charts at my home site) – the investment grade corporate bonds to longer-dated Treasuries (LQD:IEI) and high yield corporate bonds to short-term Treasuries (HYG:SHY), strengthened yesterday. It appears to be a question of time before LQD:IEI pulls HYG:SHY along. Stocks can chop for a while before venturing higher again – that’s the message from these two ratios. 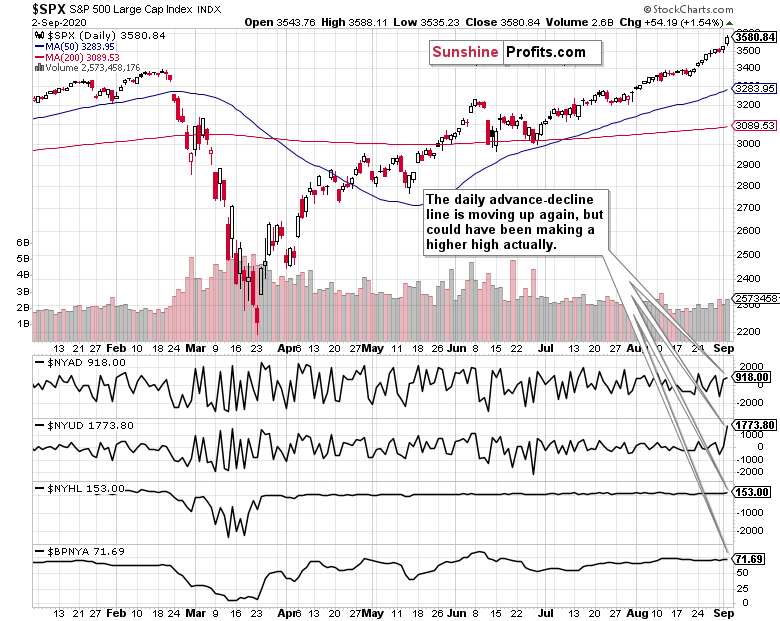 The advance-decline line rose, but could have been making a higher high. It isn’t, which paints a short-term bearish divergence, a non-confirmation. A very short-term one, precisely – I expect it to be resolved with higher stock prices before long.

The Russell 2000 isn’t exactly at its strongest, but isn’t breaking down either. It’s just sending a signal of short-term caution for the S&P 500.

The emerging markets don’t mirror that amber light as closely though. The three views examined in this section thus paint a mixed short-short picture. The medium-term one is clear though, and it’s as bullish as yesterday:

(…) Because TINA – there is no alternative in the hunt for yield than to move ever farther on the risk curve. This hated bull run will see more money deployed before making a top that I don’t see happening this year, not at all.

From the Readers’ Mailbag

One article was brought to my attention, and its subject serves as the question. Within the answer, I’ll provide a few broad thoughts.

Q: The coming $37 trillion technology boom will catapult the market to remarkable news highs… minting millionaires along the way

A: That sounds and is a stock picking game that seeks to front-run the whole market. Not to mention that the offer has been mentioned now in 2020, and the (I won’t give names, because the purpose of my answer is not to critique any individual undertaking, but to provide a broad view of mine as to similar offers) material appears to be a rerun of Halloween 2018 publication – according to Stock Gumshoe.

A decade ago, I was getting similar emails about riding the secret trend of smartphones doing away with computers. It’s a bit like the internet boom – great promise, hype, dotcom bubble, crash followed by serious business efforts to make the industry broadly cash-flow positive. Such were the 2000s. Precisely the same story as railroads in 1830s to 1840s. It simply takes time to bring something radically new to market and make money in it at the same time. Rome simply wasn’t built in a day.

Stock picking can be extremely profitable but a dud too – far from all the picks are tenbaggers. You’re still exposed to company risk (the quality of its management etc). With surefire stuff such as the above bet on AI (happening for so many years already by the way), going the sectoral route is more risk-proof to me. I would compare it to going with GDXJ (junior gold miners ETF) as opposed to trying to pick the company that might or might not have the touted ore quality at hand, in a friendly foreign jurisdiction or not, if you know what I mean…

Summing up, the S&P 500 market character hasn’t changed, and it’s still bullish. The case for a pause hasn’t disappeared, but with still solid credit market performance, keeps being moved into the future. But the future might be arriving – in the very short run. As the put/call ratio keeps sliding and sliding, it’s my opinion that the pause is approaching. Relatively shallow correction within a bull run, that is. Aren’t we seeing one in today’s premarket and early regular session?

All essays, research and information found above represent analyses and opinions of Monica Kingsley and Sunshine Profits’ associates only. As such, it may prove wrong and be subject to change without notice. Opinions and analyses were based on data available to authors of respective essays at the time of writing. Although the information provided above is based on careful research and sources that are believed to be accurate, Monica Kingsley and her associates do not guarantee the accuracy or thoroughness of the data or information reported. The opinions published above are neither an offer nor a recommendation to purchase or sell any securities. Ms. Kingsley is not a Registered Securities Advisor. By reading Monica Kingsley’s reports you fully agree that she will not be held responsible or liable for any decisions you make regarding any information provided in these reports. Investing, trading and speculation in any financial markets may involve high risk of loss. Monica Kingsley, Sunshine Profits’ employees and affiliates as well as members of their families may have a short or long position in any securities, including those mentioned in any of the reports or essays, and may make additional purchases and/or sales of those securities without notice.