The U.S. is home to more billionaires than any other country in the world, but you might be surprised to learn that there are 7 states that haven’t produced a single billionaire. In fact, ranking the richest people of all time from every state reveals extremely wide differences in wealth. 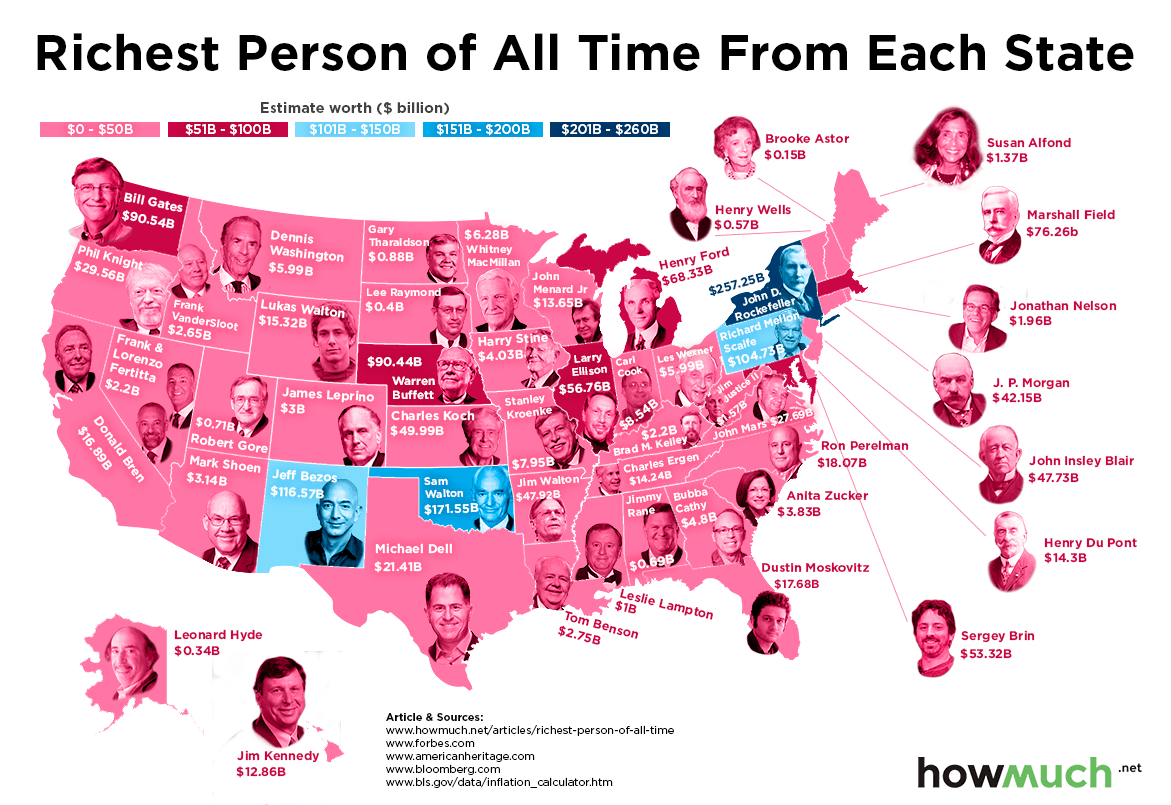 How do you figure out the net worth of the richest individual of all time? We found our data thanks to Forbes, which did much of the number crunching for us. A lot of the richest people ever have long since died, meaning we had to adjust numbers for inflation to fairly compare it to today. We then color-coded each state to represent the range of its most successful citizen, and we added a picture of the millionaire or billionaire in question.

Top 10 States with the Wealthiest People of all Time

See also  The Vaccines Kill Many More People Than They Save

Our map reveals several interesting trends about the richest person from every state. First off, almost every person on the map is a man, although there are a few exceptions. Anita Zucker is the wealthiest of the 3 women with a personal fortune of $3.83B. At the very upper end of the spectrum, only four people cross the $100B mark, with nobody coming anywhere close to John D. Rockefeller at the very top ($257.25B). That’s the kind of money that lets you establish permanent multi-generational foundations long into the future.

Another interesting fact about our map is the relationship between where someone was born and where they made their money. In other words, clearly sometimes people have to move to make a fortune. Jeff Bezos is originally from New Mexico, but Amazon is headquartered is in Seattle, Washington. Sam Walton may have been born in Oklahoma, but his company (Walmart) is headquartered in Arkansas. Other names are synonymous with their birth states. Bill Gates founded Microsoft in Washington, and John Menard Jr created the eponymous hardware store in Wisconsin. Henry Ford came from Michigan, the same state he built the famous car company. Warren Buffett is the Oracle of Omaha, and guess what? He still lives in Nebraska.

It is hard to grasp just how enormous these personal fortunes really are. As a whole, the group averages about $30B in net worth. If you combine all their fortunes together, you would have more than $1.5 trillion. That’s about the same size as Canada’s entire economy. So where are the best odds of making this list? You might be in luck if you come from New Hampshire. Brooke Astor only made $150 million.