Let’s examine the numbers and study the relationship between margin debt and the market, using the S&P 500 as the surrogate for the latter.

The first chart shows the two series in real terms — adjusted for inflation to today’s dollar using the Consumer Price Index as the deflator. At the 1997 start date, we were well into the Boomer Bull Market that began in 1982 and approaching the start of the Tech Bubble that shaped investor sentiment during the second half of the decade. The astonishing surge in leverage in late 1999 peaked in March 2000, the same month that the S&P 500 hit its all-time daily high, although the highest monthly close for that year was five months later in August. A similar surge began in 2006, peaking in July 2007, three months before the market peak.

Debt hit a trough in February 2009, a month before the March market bottom. It then began another major cycle of increases.

FINRA has released new data for margin debt, now available through October. The latest debt level is down 6.25% month-over-month. The October data gives us an additional sense of recent investor behavior. 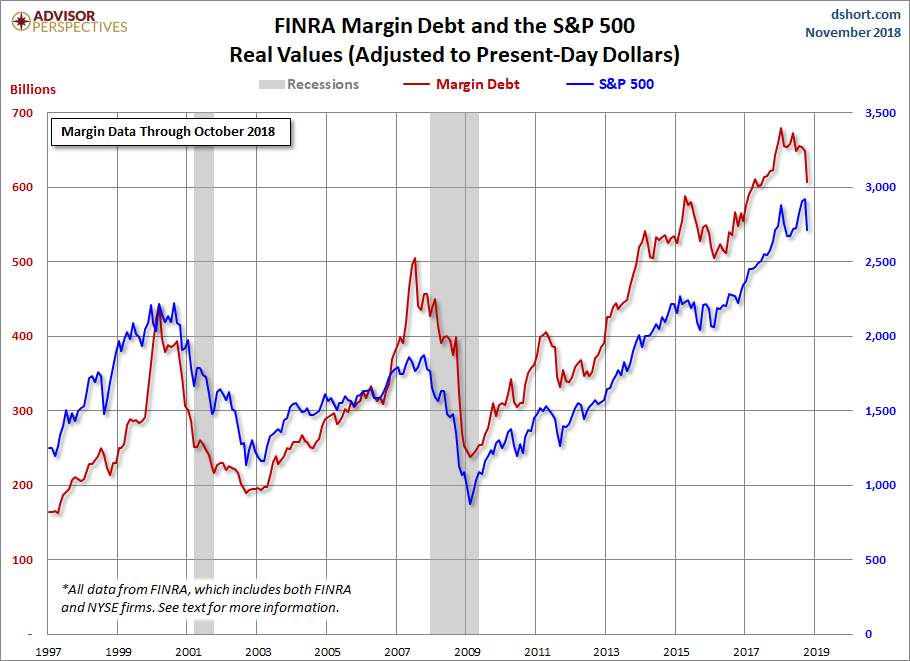 READ  HOUSING MARKET BLACK PILL: Or why housing prices will continue to rise until the complete collapse of the system. 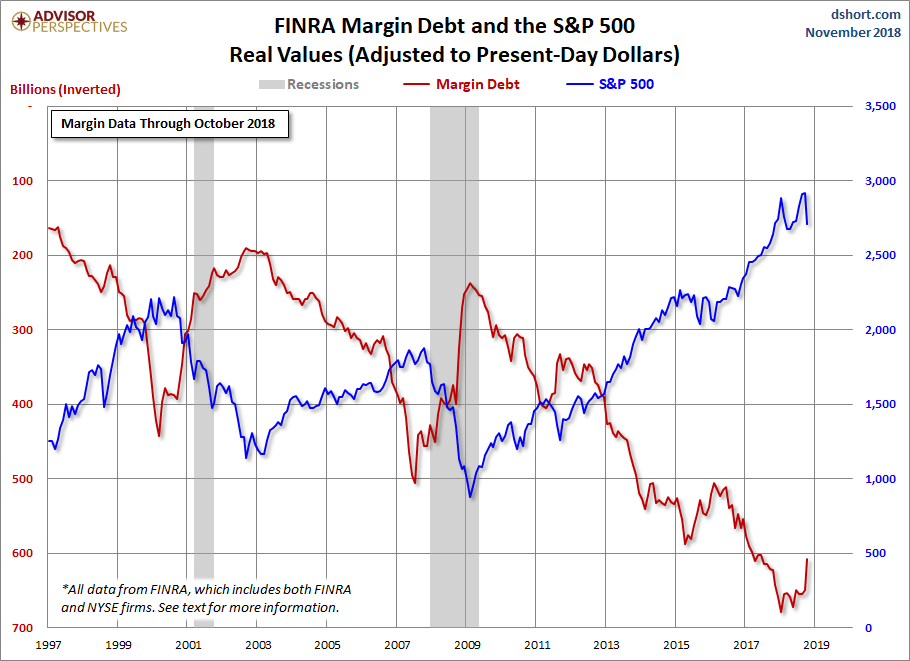 The next chart shows the percentage growth of the two data series from the same 1997 starting date, again based on real (inflation-adjusted) data. We’ve added markers to show the precise monthly values and added callouts to show the month. Margin debt grew at a rate comparable to the market from 1997 to late summer of 2000 before soaring into the stratosphere. The two synchronized in their rate of contraction in early 2001. But with recovery after the Tech Crash, margin debt gradually returned to a growth rate closer to its former self in the second half of the 1990s rather than the more restrained real growth of the S&P 500. But by September of 2006, margin again went ballistic. It finally peaked in the summer of 2007, about three months before the market. 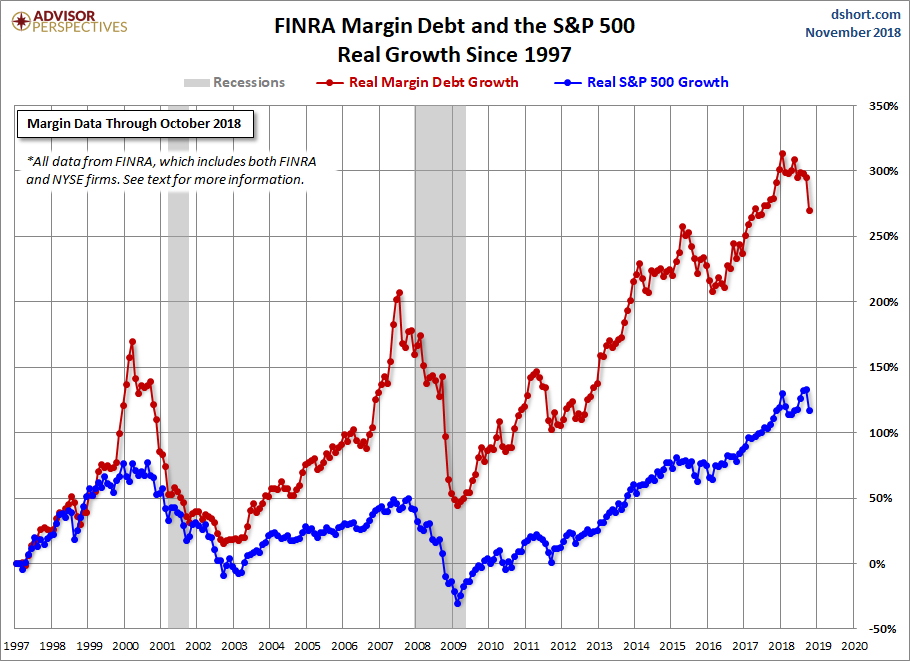 Lance Roberts of Real Investment Advice analyzes margin debt in the larger context that includes free cash accounts and credit balances in margin accounts. Essentially, he calculates the Credit Balance as the sum of Free Credit Cash Accounts and Credit Balances in Margin Accounts minus Margin Debt. The chart below illustrates the mathematics of Credit Balance with an overlay of the S&P 500. Note that the chart below is based on nominal data, not adjusted for inflation. Here, we have retained the NYSE data through November 2017 and switched to the FINRA data moving forward. 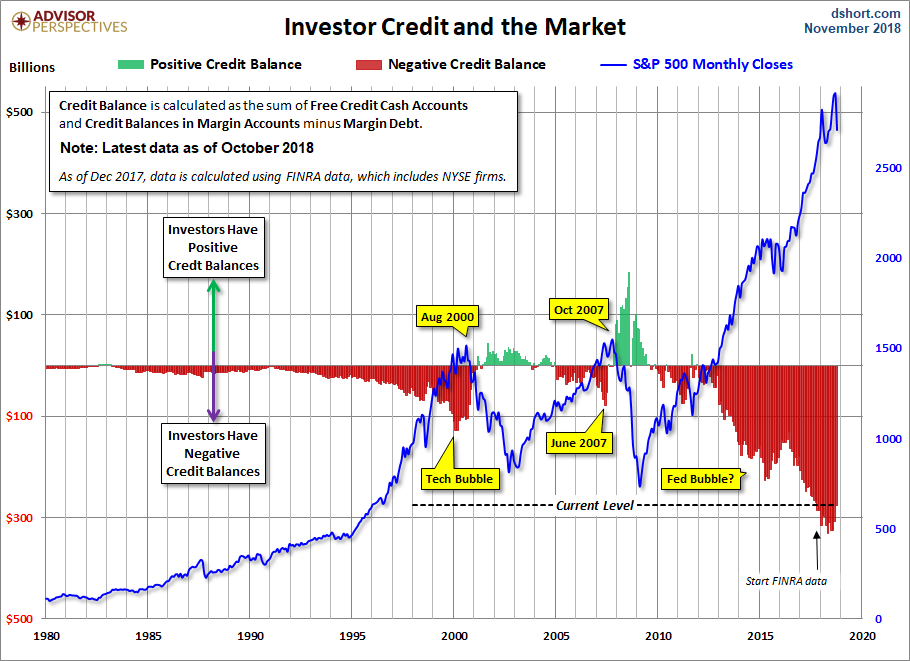 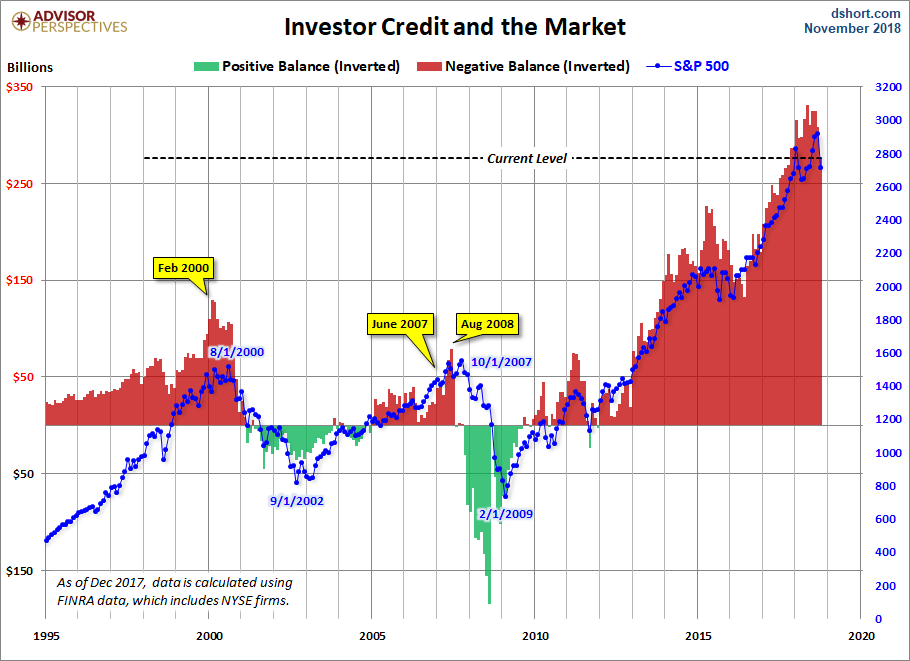 As we pointed out above, margin debt data is several weeks old when it is published. Thus, even though it may, in theory, be a leading indicator, a major shift in margin debt isn’t immediately evident. Nevertheless, we see that the troughs in the monthly net credit balance preceded peaks in the monthly S&P 500 closes by six months in 2000 and four months in 2007. The most recent S&P 500 correction greater than 15% was the 19.39% selloff in 2011 from April 29th to October 3rd. Investor Credit saw a negative extreme in March 2011.

There are too few peak/trough episodes in this overlay series to take the latest credit balance data as a leading indicator of a major selloff in U.S. equities. This has been an interesting indicator to watch and will certainly continue to bear close watching in the months ahead.