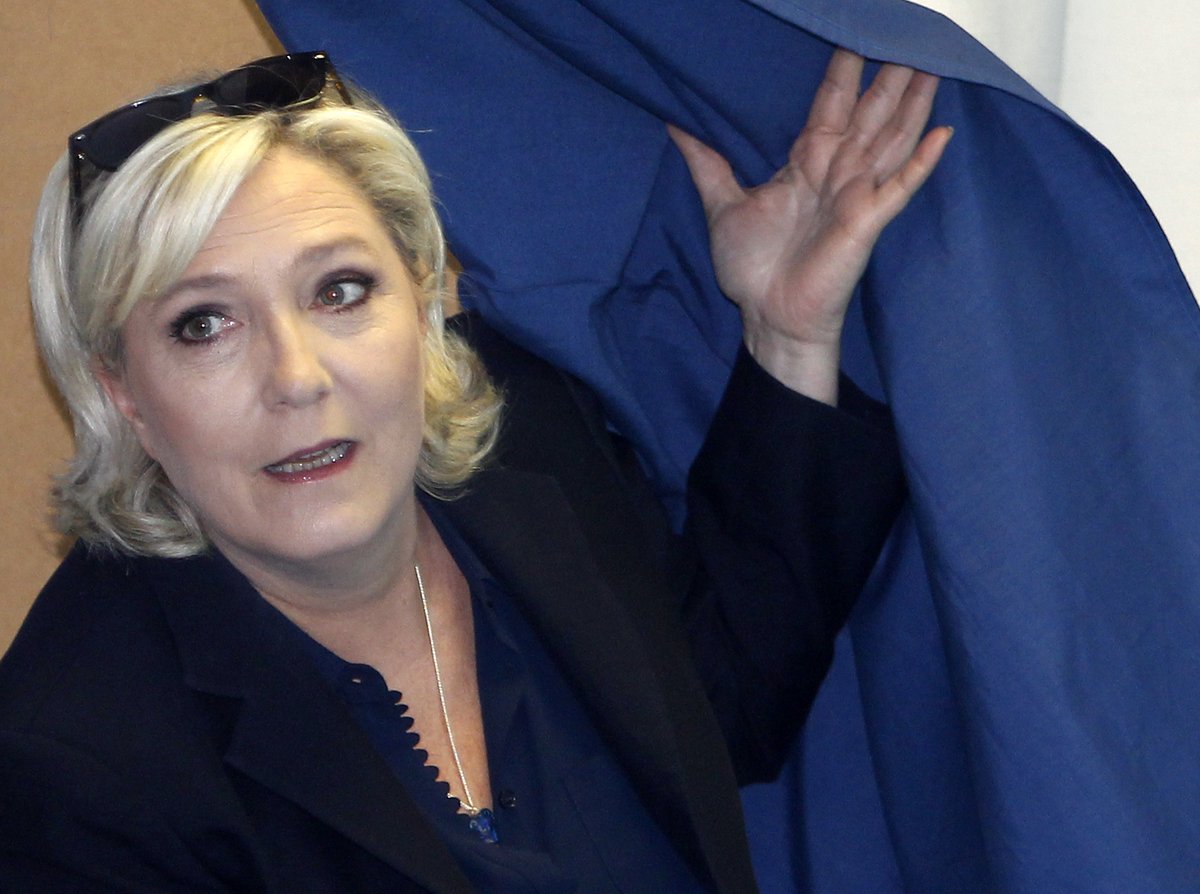 The leader of France’s far right National Front party Marine Le Pen was charged on Thursday over her tweeting of gruesome images of Isis atrocities in the Middle East, which included a photo of the decapitated body of US reporter James Foley.
Prosecutors announced on Thursday that Le Pen had been charged over the tweets she sent in December 2015..
www.thelocal.fr/20180301/frances-marine-le-pen-charged-over-shameful-isis-tweets
PARIS (AP) — French prosecutors filed preliminary charges Thursday against far-right leader Marine Le Pen for tweeting brutal images of Islamic State violence, in a new blow to a woman long seen as the face of Europe’s anti-immigrant populism.
The prosecutor’s office in the Paris suburb of Nanterre said the charges were issued Thursday for “distribution of violent images.” If the case eventually reaches trial and she’s convicted, Le Pen could face up to three years in prison and 75,000 euros ($90,000) in fines.
archive.is/q0SMx#selection-431.0-435.272
Unbelievable. Charged as a criminal for exposing islamic barbarity.


They took away her parliamentary immunity. MLP is a member of the French parliament for a constituency in Northern France.
The leader of France’s far-right National Front, Marine Le Pen has been placed under formal investigation over her tweets, showing Daesh terrorist group violence, the Reuters news agency reported, citing its judicial source.
The investigation relates to three graphic images of Daesh executions that she posted on Twitter in December 2015, including the beheading of American journalist James Foley. Le Pen condemned an earlier stage of the investigation as “political interference”.
Marine Le Pen is facing charges of reporting “violent messages that incite terrorism or pornography or seriously harm human dignity” and that could be viewed by a minor. The crime is punishable by up to three years in prison and a fine of 75,000 euros ($91,000).
sputniknews.com/europe/201803011062117307-marine-le-pen-investigation-daesh-tweet/
Le Pen has reacted to the decision on Twitter, saying, “Better to be a jihadist returning [to France] from Syria than an MP who denounces the abasement of Islamic State [Daesh]: one takes fewer judicial risks”.
(original text) Mieux vaut être un djihadiste qui rentre de Syrie qu’une députée qui dénonce les abjections de l’Etat islamique: on prend moins de risques judiciaires… MLP
— Marine Le Pen (@MLP_officiel)
sputniknews.com/europe/201711081058927724-marine-le-pen-daesh-picture-twitter/
How can we not hate Macron?
I would not touch him with a 10 foot pole.

See also  THIS IS BAD (AND IT’S ABOUT TO GET A LOT WORSE)
See also  Was the Fed a case of Much Ado About Nothing?
707 views

5 thoughts on “Marine le Pen has been charged over three tweets about Islamic State violence in 2015. Facing 3 years in prison, €90,000 euro fine! They took away her parliamentary immunity.”