If you read mainstream financial news, you don’t need me to tell you how bad our economy is. Skepticism abounds in the punditry.

But sometimes we get so busy worrying about negative things that we ignore positive things happening right here and now.

That’s not healthy and can make us overlook investment opportunities. So today, I’ll look at some good economic news that has been lost in the noise lately.

Small Business Is as Optimistic as Ever

The National Federation of Independent Business (NFIB) has been surveying its small business members since 1973.

The NFIB data is a rich, long-term history of small business owner sentiment, both positive and negative. It has varied over time, as you might expect.

Presently, its index is near its most optimistic level ever—0.1% below the 1983 all-time high. 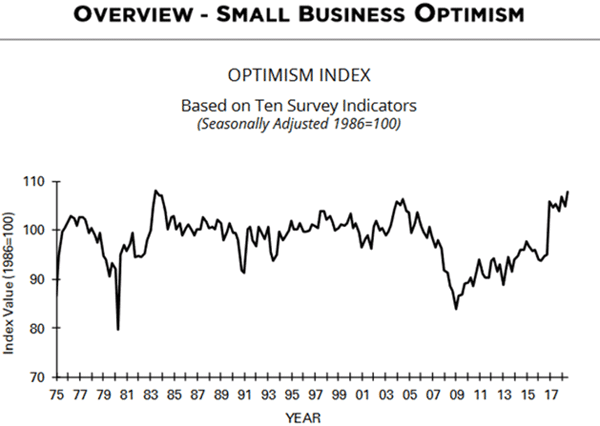 Considering where we were a few years ago, that is amazing.

The other peak was in 1983. The Volcker Fed had mostly stamped out inflation while Reagan’s tax cuts and deregulation were beginning to bear fruit. This marked a boom period that would last even longer. The next recession would not strike until mid-1990.

History doesn’t repeat itself, but it often rhymes.

This time, the Fed has been working to stamp out deflation, not inflation. It appears to have made some progress.

We also have a new, business-oriented administration, similar in some respects to the shift from Carter to Reagan. This encouraged early 1980s business owners, and the Trump administration is doing the same now.

In the past, we’ve seen this index decline gradually over two to three years as the economy edged toward recession. We see no such thing now. Just the opposite, the index moves up.

That suggests, as I heard at Camp Kotok, the present expansion will continue into 2019 and beyond.

Worker Shortages Show That the Recovery Is Real

Another key NFIB indicator is the difficulty for small businesses to fill in job positions. Right now, it’s at a record high. Many owners report qualified worker shortages as their single greatest business challenge. 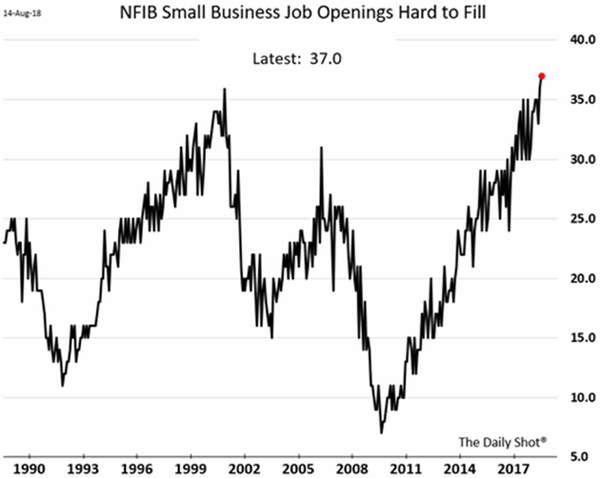 This is a consequence of another “good news” item: historically low unemployment. It took way too long after the last recession, but employers are finally willing to expand payrolls.

They can do so only because they expect sales to grow beyond their present capacity to deliver. That is why business sentiment is so important.

I see the same in private transportation newsletters I get. US railroads and seaports are bustling, to the point that shipping costs and logistical snarls are now major challenges for many businesses.

That’s not great… but it’s also not consistent with economic slowdown forecasts.

To be blunt, businesses are spending big money to transport big quantities of raw materials and finished goods across the country. They are not doing it for fun, or because they enjoy paying truck drivers.

They believe someone will buy those goods at profitable prices despite the transport cost. Maybe they’re wrong, but that is what they think.

And the Really Good News

The above is just some of the economic and financial good news in the US.

If you want really good news, look at what’s happening inside many companies and industries. The cost of solar panels is plunging, as is the cost of pulling a barrel of oil out of the ground. The energy business is now a technology business.

Massive leaps are being made in 3D printing, robotics, and artificial intelligence.

I know Elon Musk is a bit of a lightning rod right now, but he was visionary enough to somehow put a rocket into space, launch a satellite, and then bring that same rocket back to earth. He promises to eventually cut the cost of putting something into space by 90%.

Richard Branson, Jeff Bezos, and Paul Allen are in the same race. Notice a pattern? It is not governments but committed multi-billionaires moving the human race forward. And they are doing it with the bottom line in mind.

I know asteroid mining sounds like science-fiction, but there is literally a limitless amount of materials available near Earth. They are visionary enough to see it.

Another billionaire, Bill Gates, has done a masterful job of focusing the world on malaria. Malaria deaths are down by 60% since the turn-of-the-century. There is still much to be done, but it’s major progress.

I can cite scores of statistics about how things are getting better. And they will continue to get better even as we go into The Great Reset’s financial turmoil.

There are going to be so many new investment opportunities that you will almost feel like you’re being whipsawed. And because of the financial turmoil, raising capital will be more difficult, which means you will get better deals for your investment dollars.

If you properly construct your portfolio today, you will enjoy this phenomenal future. It’s going to be fun if you make the proper plans.