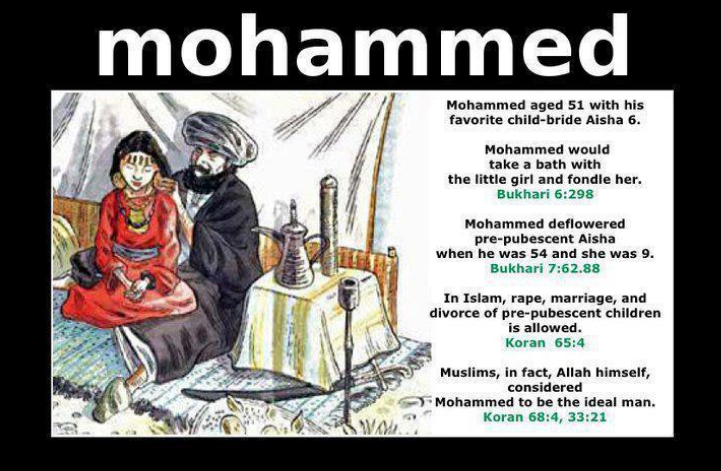 First it was “breaking-heart news” about the (former) famous Irish singer Sinead O’Connor converting to Islam. Yeah, the super-star of the nineties, the “Nothing compares 2 you” bald-chick is now a Muslim convert. She also changed her name, in good Islamic tradition.

This is to announce that I am proud to have become a Muslim. This is the natural conclusion of any intelligent theologian’s journey. All scripture study leads to Islam. Which makes all other scriptures redundant. I will be given (another) new name. It will be Shuhada’

The same stunt was pulled by Janet Jackson recently, if memory serves. Why? Because reasons, diversity, multiculturalism, money, social-justice, brainwashing, white-privilege/black privilege, who knows and who actually cares anymore? The world has gone totally nuts.

And to add insult to injury, we just learned that the good people in the European Union are preparing to become part of ummah, the global Islamic caliphate, as a EU court ruled that defaming Prophet Mohammad, peace be upon him, is not free speech. As in, criticizing the prophet is blasphemy. As per Sharia law. There’s no way around this: the EU courts are now ruling that you can’t criticize Islam. And that’s enforcing Sharia/Islamic law, literally.

The ruling was made by Strasbourg-based ECHR. ECHR stands (this is hilarious) for European Court for Human Rights, and it says that insulting prophet Muhammad (peace be upon him) “goes beyond the permissible limits of an objective debate” and “could stir up prejudice and put at risk religious peace.” The ECHR ruled Austrian courts had “carefully balanced her right to freedom of expression with the right of others to have their religious feelings protected.”

World renowned singer Shuhada Davitt @MagdaDavitt77 (#SineadOConnor) has proclaimed the #Shahadah with me in #Ireland.  She is so happy ! Masha Allah !#Ireland #Islam #SineadOConnorEmbracesIslam @SineadOconnorHQ pic.twitter.com/mBeHlcrgqW

READ  FDA rules Johnson and Johnson 60 million vaccines are contaminated and must be destroyed!

How come the EHCR ruled that blasphemy against the prophet of Islam is not haram in the European Union? Well, everything started with an Austrian woman, who argued publicly back in 2009 that prophet Muhammad’s marriage with a six year old girl and him having sex with Aisha when she was 9 was good old fashioned pedophilia. At the time the marriage was “consummated”, Muhammad was 54. According to Islamic tradition (Hadith, Koran), the founder of Islam, prophet Muhammad, the best Muslim that ever existed, and the role-model for billions of Muslims (Qur’an 33:21), had sex with a 9 year girl, his child-wife at the time (this is why marrying children is still a big-thing in Islamic countries by the way), and that kuffar Austrian woman had the audacity to call him a pedophile. Moreover, “the Austrian courts had held that ES was making value judgments partly based on untrue facts and without regard to the historical context.”.

See, in Western tradition, having sex with nine year olds is morally wrong and despicable, and it will also land you in jail, where you’ll benefit from special treatment from other inmates as a certified child molester. Well, maybe not in the UK or Austria, Sharia compliant countries more or less, boasting a numerous Muslim population in their prison-system, but generally speaking, pedophilia is not viewed to be cool anymore in civilized countries (those untouched by diversity and vibrant multiculturalism). After the Austrian woman has called prophet Muhammad a pedophile during a public debate back in 2009, she was sued and convicted in 2011 of disparaging religious doctrines by a Vienna court. Vienna is the capital of Austria, in case you were wondering, and formerly a nice city to live in. By the way, she had to pay a fine, about $1000, no biggie, plus legal costs.

The blasphemous woman was unhappy with the ruling, hence she appealed the decision later, arguing that her comments were nothing more than freedom of expression (muh free speech), and religious groups, including Muslims who chose to leave their Islamic shitholes to come and live in the EU, should be capable of tolerating criticism, just like Christians and others do. However, the European Court for Human Rights decided that the Austrian court’s decision “served the legitimate aim of preserving religious peace.”

Basically, you can’t criticize Muslims, nor their religion (in a secular country like Austria, not in Pakistan, mind you), even if it encourages pedophilia. Why? Well, because who knows what may happen when you make peaceful Muslims angry? Ask those Charlie Hebdo guys.

Can you imagine a European court ruling that someone deserves to be fined and/or imprisoned for, let’s say, criticizing Jesus Christ? This would never happen. The case wouldn’t even come to them.

The Thursday ruling by ECHR is a big step toward the enforcing/imposition of Islamic Sharia law in Europe, as it basically accepts tacitly the restrictions of criticizing prophet Muhammad, which is the law of the land in Muslim majority countries like Iran, Saudi Arabia, Pakistan, Afghanistan etc.

And if you think we got it better, let’s remember dear leader Hussein’s wise words: 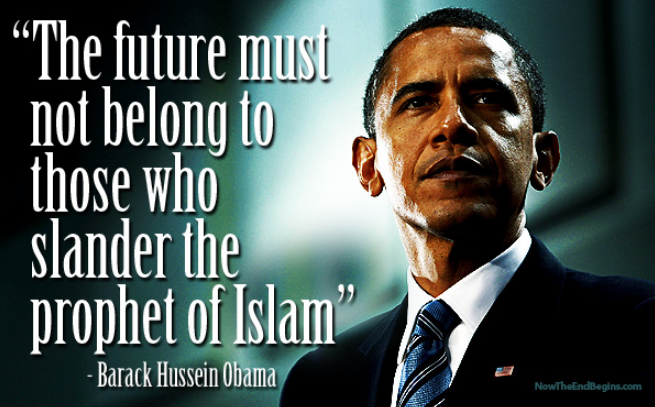 To tell you the truth, I am notsurprised this has happened in the EU of all places. It’s all part of the the Coudenhove-Kalergi plan after all.