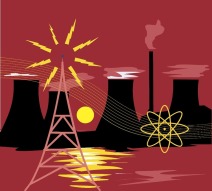 The Federal government has sent to Congress a long awaited 123 Agreement with Mexico which, if approved, will open the door for U.S. firms to export nuclear reactor technologies to that country  under 10 CFR 810.  Once in place the agreement has a nominal shelf life of 30 years although it can be updated by either party.

Plans for new 1000 MW BWRs are in place, but no construction commitments are likely in the near term due to the low price of natural gas

The 123 Agreement replaces a previous multilateral agreement made through the IAEA. Congress has 90 days to review the new 123 agreement

Mexico has plans to commission new reactors, but has not settled on designs or vendors.

Dan Lipman, a expert at NEI on international commercial nuclear cooperation, said in a statement, the new 123 agreement will be good for U.S. firms seeking to do business in Mexico.

“We applaud the Trump administration for submitting to Congress for review a 123 Agreement with Mexico, which facilitates trade in nuclear technology between our countries,” Lipman said.

“Mexico is one of the United States’ largest trading partners and a longtime and significant importer of American nuclear technology.”

According to the World Nuclear Association (right), Mexico has two nuclear reactors generating almost 4% of its electricity. Its first commercial nuclear power reactor began operating in 1989.

WNA in its profile of Mexico’s plans for new reactors notes that high-level government support exists for an expansion of nuclear energy, primarily to reduce dependence on natural gas, but also to cut carbon emissions

Under the the most aggressive for several energy development scenarios developed by the government as far back as 2010 up to ten nuclear power plants would be built at Laguna Verde so that nuclear energy supplied nearly a quarter of Mexico’s power needs by 2028.

This plan would allow the country’s carbon emissions from power generation to remain virtually unchanged from 2008 despite projections of substantially higher demand. About 86% of Mexico’s electricity is currently generated by fossil fuels. Natural gas is the primary fuel for this purpose according to DOE/EIA. 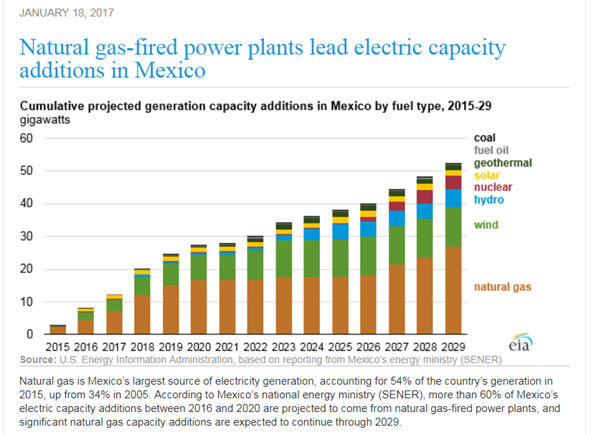 An earlier proposal was for one new nuclear unit to come on line by 2015 with seven more to follow it by 2025 to bring nuclear share of electricity up to 12%. Cost studies showed nuclear being competitive with gas at about US$ 4 cents/kWh in all scenarios considered.

The assumptions for these energy policy scenarios have been challenged by continued low prices for natural gas which has resulted in a scaling back of the most optimistic plans. The most plausible outlook is for two-to-three nuclear reactors at Laguna Verde with completion by the end of the 2020 decade.

According to the U.S. Department of Commerce, International Trade Administration, in a 2016 report, Mexico’s plans for full size new nuclear reactors focus on 1000 MW BWR type designs. It also assesses the market segments where U.S. firms would have the best opportunities to participate in these new builds.

Financing of even two 1000 MW reactors at an “overnight price” of $5000/Kw would cost Mexico $10 billion plus the cost of upgrading the national grid to deliver the power to customers.

Beyond that plan WNA also notes that Mexico may look to build more affordable small modular reactors to provide power and desalinate seawater for agricultural use. Because the desalinization plants need to be at coastal sites, and due to the cost of piping the water from them, it’s likely that Mexico would plan for multiple uses, e.g., industrial  and residential uses of potable water in addition to use for intensive agriculture.

Hydroponic greenhouse applications are often proposed for use with these plants since they use the water much more efficiently and avoid evaporation loss that would occur in open fields. For these reasons, locations for these plants would likely be near urbanized areas.