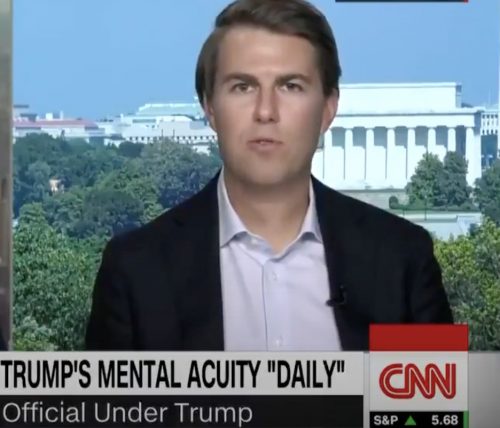 Miles Taylor just outed himself as The New York Times’ Deep Throat, a.k.a. “Anonymous,” who boasted he was part of an internal soft coup against the Trump Administration by the deep state. He is now being called a deep fake by, well, nearly everyone.

On September 5, 2018, The New York Times published a highly controversial opinion editorial titled “I am Part of the Resistance Inside the Trump Administration” with a note at the top that said, “The Times is taking the rare step of publishing an anonymous Op-Ed essay. We have done so at the request of the author, a senior official in the Trump administration whose identity is known to us and whose job would be jeopardized by its disclosure.” The paper or record later defined “a senior official” as meaning someone in the “upper echelons of an administration.”

On Wednesday, that official revealed himself. Miles Taylor, who once told CNN he only wears masks at Halloween and during pandemics, removed his Taylor-made mask right before Halloween to claim he is “Anonymous.” Never mind his twice-told tale to CNN that he had no idea who Anonymous was:

In spite of Taylor’s lies as a paid contributor to CNN, the network is keeping him on. Apparently, The Times’ source is the kind or resource CNN likes.

A CNN spox just told me that Miles Taylor will remain a contributor despite lying to Anderson Cooper. CNN cannot have it both ways — slamming Trump for his lies, yet condoning a very big and blatant one by its own contributor.

Now that he’s come out, we can see why The Times published him as “Anonymous.” The name gave him that Deep-Throat mystique he needed to gain attention. Without that scary mask, Miles Taylor was a virtual unknown. The Times could not have claimed he was a “senior official” when he was, in fact, a relatively minor player in the Trump government. Taylor didn’t attain a leadership role within his own department until months after The Times published his op-ed.

How scary would Ghostface be in the movie Scream without his mask of anonymity or Jason in Friday the 13th? As with QAnon, the name “Anonymous” inflated Miles Taylor beyond what he deserved. While he rose after his op-ed to become second-in-command of Homeland Security as chief of staff, he was merely a “policy advisor” when he wrote his hit piece.

Wow. Miles Taylor wasn't even listed on DHS's senior leadership page when NYT published his op-ed because he was just a policy advisor, not even chief of staff.

Here's a snapshot of top leadership at DHS a few weeks after the op-ed was published. (October 2018) pic.twitter.com/3CPzKcdB6N

Taylor chose anonymity so he could enjoy the specter of everyone wondering if he was a senior cabinet official who engaged with the president on a weekly or even daily basis inside the White House. Of such minor repute was he that, once the true identity of A. was revealed on Wednesday, one of the fastest rising Google searches became “Who is Miles Taylor?” Apparently a complete unknown until he became Anonymous.

Even the president says “I never knew him.”

Who is Miles Taylor? Said he was “anonymous”, but I don’t know him – never even heard of him. Just another @nytimes SCAM – he worked in conjunction with them. Also worked for Big Tech’s @Google. Now works for Fake News @CNN. They should fire, shame, and punish everybody….

It’s unlikely, as an HS advisor, he saw the president in person much. What he claimed to know as an insider was hearsay through those he interacted with who did spend time in the White House.

The Times’ Deep-State Throat insider turns out really to be a smarmy, baby-faced boy who boasted heroically of working to thwart the president’s agenda in order to save America from the leader it voted for. Deep-State Throat said others in the president’s administration, like himself, “are working diligently from within to frustrate parts of his agenda and his worst inclinations…. That is why many Trump appointees have vowed to do what we can to preserve our democratic institutions while thwarting Mr. Trump’s more misguided impulses until he is out of office.”

In light of Wednesday’s revelation of Taylors insignificant stature, Matt Winlock, another senior advisor, tweeted, “What did he do to frustrate the President’s agenda? Refuse to deliver the Secretary’s coffee? Hide the toner? Use 2 spaces after periods?”

Raising himself above the Great Unwashed who elected Trump, Taylor self-righteously wrote, “We believe our first duty is to this country, and the president continues to act in a manner that is detrimental to the health of our republic.” By writing his op-ed, he proved the Deep State is more than a conspiracy theory. He proved that mere policy wonks do work in the deep recessions of government to thwart the moves of presidents if they step out of line with the the deep motives of unelected career insiders.

Miles Taylor is a Neocon. He was upset that the president was not going by the Republican playbook. Taylor revealed his bias when he railed against the president’s proclivity to be too soft on Russia – always the favorite hobby horse for Neocons to beat. Taylor specifically noted that his associates in the deep trenches “of the administration [are] operating on another track, one where countries like Russia are called out for meddling and punished accordingly.” The president, he noted, was too reluctant to expel Russian spies, and “he expressed frustration that the United States continued to impose sanctions on the country.” Taylor let us know that honest patriots like himself were undermining the duly elected president in order to “hold Moscow accountable.”

In his defense, Taylor argued, “This isn’t the work of the so-called deep state. It’s the work of the steady state.” However what does “steady state” mean but the state that never changes because it constantly works to thwart any elected leader who tries to bring change? That, of course, is the very definition of the “deep state.”

Curiously, The Times, knowing full well who its own Deep-State Throat was, published another article on February 20, 2020, calling out the White House for “transferring a senior national security aide who fell under suspicion of writing an anonymous insider account of dissent within the Trump administration, the latest of several senior personnel moves stemming from questions of loyalty to President Trump.” This slash-and-burn article against the White House named “Victoria Coates” as Anonymous”

“Current and former administration officials said Ms. Coates … had been targeted by a whisper campaign among some pro-Trump conservatives that she was Anonymous.”

There we have an example of The Times knowingly publishing fake news about its own fake news about its own, shall I say, Trumped-up anonymous author? Stranger still, The Times now has the audacity to let us in on the fact that it knew full well when it published the Coates’ article that the White House was absolutely right when it said, as noted at the top of that article, “The White House ‘does not put any stock’ in the rumor that Victoria Coates, the aide, wrote an Op-Ed essay in The Times in 2018.”

Want some fake news with your fake news? The Times doesn’t even blush telling us they served up this mush of half-baked conspiracy about Coates! It could have either killed the Victoria Coates story or dispelled the rumor right there by confirming the White House’s position. It didn’t have to out Anonymous to simply confirm Coates was not Anonymous.

Such journalist integrity, however, would have deprived The Times of another opportunity to smear the White House by making it look like the White House was covering the revenge of the Donald against Deep-State Throat.

In defense of his anonymity, Taylor now piously claims the decision cost him income. I don’t see how. He advanced rapidly to chief of staff a few months after going rogue. Then he got a lucrative contract as a talking head on CNN and he wrote a book. Protesting a bit too much, Miles Taylor signals his virtue by telling us, “I declined a hefty monetary advance and pledged to donate the bulk of the proceeds.” Yeah, but to whom? Your children’s education funds? Giving up “the bulk” still means a good sum will go to him directly, and the advance would have only counted against those later gains anyway.

Ironically, by coming out just before the election, Taylor is not dealing Trump a death blow at the last minute as he hoped, but may even give him a boost. He has certainly, however, lopped off his own head. Now everyone can see what a pathetic, self-righteous, self-aggrandizing, lying little weed the writer of The Times warning to America really was all along.

Taylor’s revelation that he is the heroic informer evokes the same eery familiar spirit of the recent time when “‘Clueless’ Former FBI Director James Comey Admitted FBI’s Trump-Russia Probe Was a Ball of Bungled Confusion.” Both intelligence/national-security caricatures emit the same sickly sweet odor of self-righteousness in their belief that they serve only the national good when working against the president of the United States.

Likewise, The New York Times careless unmasking of its own fakery with the Coates’ story reminds me of how the “NEW YORK TIMES PROVED IT IS FAKE NEWS by Shredding Years of Its Own Reporting on Trump Tax Fraud and Russiagate.” These guys are all so full of their own hubris and invincibility they no longer even care if they are revealing how fake they are! Total frauds.

Taylor’s conclusion that “the country cannot rely on well-intentioned, unelected bureaucrats around the president to steer him toward what’s right” because “he has purged most of them anyway…” almost makes me want to vote for Trump just to pull the weeds out, and I didn’t vote for Trump the first time!

(This article was published originally on RT.com.)