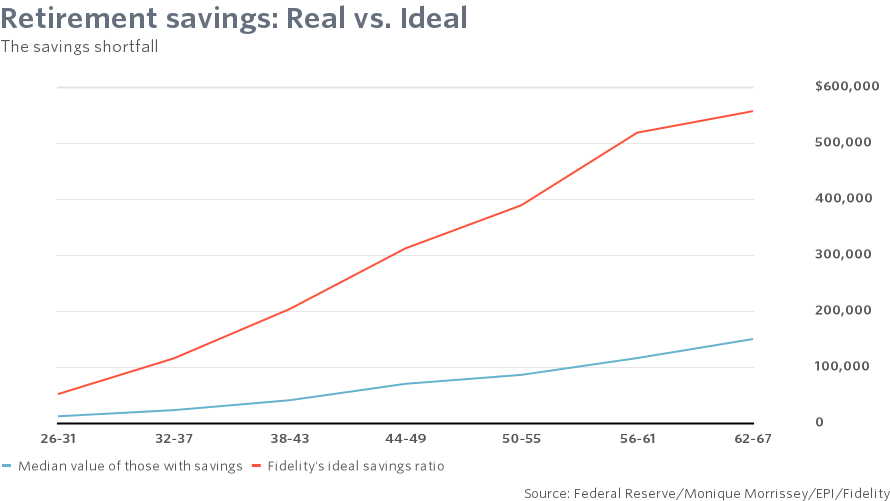 If you saw that story on MarketWatch by my colleague Alessandra Malito that said you should save double your annual salary by the time you’re 35 for your retirement, you might be wondering along with half of Twitter if that’s even possible.

What with the stagnant wages, paying the rent, saving up for a house down payment, making the car payment, paying off the student loan, and all the other essential and frivolous expenses of day-to-day living, can your family really put aside $115,000 by the time you are 35, or $550,000 by the time you are 67, as recommended by the experts at Fidelity who were quoted by Malito?

Of course it’s possible for some people to save that much and more, but the reality is that almost no one does.

The truth, shocking as it may be, is that the typical American family has saved almost nothing for retirement. As of the most recent comprehensive Survey of Consumer Finances in 2016, the typical family had $7,800 set aside, according to an analysis by Monique Morrissey of the Economic Policy Institute in the forthcoming “The State of American Retirement.”

The typical family headed by a 30-something — you know, those people who should have double their salary saved — had only $1,000 in retirement savings, including 401(k)s, IRAs and defined-benefit pensions. Instead of having two years of salary saved up, they had one week.

These figures are medians — half the families had more, and half had less. The medians obscure the fact that a large number of families have nosavings at all. Overall, 58% of American families have some retirement savings, but that means about 100 million American adults don’t have any.

Just over half of people ages 32 to 37 in 2016 had some retirement savings. Of those with some savings, the median value was $23,000. That represented about 40% of that age group’s median family income of $57,720. On average, the families that were saving had about a fifth of the savings that Fidelity’s experts say they should have. And, of course, millions more had nothing put aside.

Too poor to save

Why? Maybe because they were spending their money on avocado toast, luxurious vacations, fancy urban condos, Teslas TSLA, -0.01% Ubers and Spotify SPOT, +0.76% Maybe they should take a look at their lifestyle, and see that they’d be better off saving more and spending less. Maybe spending less would make them happier.

Or maybe they are just too poor to save. It’s not their virtue that’s lacking, but their cash flow.

Sometimes we forget that America is really two nations economically: There’s one vast group that struggles just to survive each month, and another smaller group that’s doing just great. Guess which group is considered normal by the experts who are always quoted in the media.

We forget sometimes that 11 million families pay more than half of their income just on rent. Or that 40 million struggle to put food on the table. Or that two-thirds of retirees rely on Social Security for most of their retirement income. These aren’t people who are going to save half a million dollars, no matter how guilty we make them feel.

The American retirement system is broken — along with the economy. We could fix it by increasing incomes and opportunities for all Americans so everyone could build more wealth. We could try to make it easier for people to get educated, buy a house, save some money. We could fix it by strengthening Social Security and the safety net so that all of us share the risks and the prosperity.

Or we could try to fix it by telling young people to just grow up and stop whining: You are on your own and you always will be. Taking collective action to strengthen our economy and improve our lives will never work.

If you are poor, it’s your fault. If you have to work until you drop dead, that’s what you deserve. Life is supposed to be nasty, brutish and short.