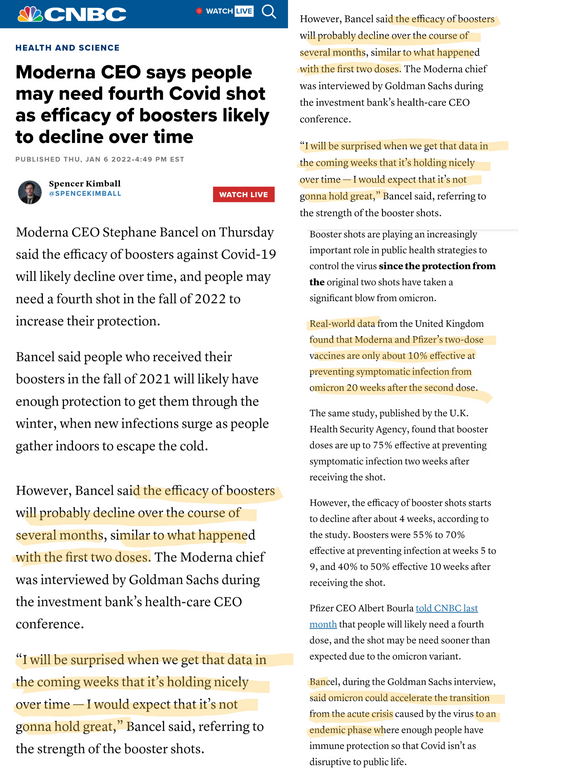 “I will be surprised when we get that data in the coming weeks that it’s holding nicely over time — I would expect that it’s not gonna hold great,” Bancel said, referring to the strength of the booster shots.

The world is currently suffering an unprecedented surge of infections due to omicron. The U.S., for example, is reporting a seven-day average of more than 574,000 new cases daily, according to a CNBC analysis of data from Johns Hopkins University.

The Moderna CEO expects another round of boosters will be necessary in the fall of 2022. He said governments, including the U.K. and South Korea, are already ordering the shots in preparation.

“I still believe we’re going to need boosters in the fall of ’22 and forward,” Bancel said, adding that people who are older or have underlying health conditions might need annual boosters for years to come.

“We have been saying that we believe first this virus is not going away,” Bancel said. “We’re gonna have to live with it.”

Real-world data from the United Kingdom found that Moderna and Pfizer’s two-dose vaccines are only about 10% effective at preventing symptomatic infection from omicron 20 weeks after the second dose.

The same study, published by the U.K. Health Security Agency, found that booster doses are up to 75% effective at preventing symptomatic infection two weeks after receiving the shot.

However, the efficacy of booster shots starts to decline after about 4 weeks, according to the study. Boosters were 55% to 70% effective at preventing infection at weeks 5 to 9, and 40% to 50% effective 10 weeks after receiving the shot.

However, he also cautioned against predictions, noting that omicron, with its dozens of mutations, took most of the scientific community surprise. The data so far indicates the omicron is more transmissible but less severe than past strains.

If they didn’t know that the vaccines would lose efficacy over the short term, how can they know that there are no adverse effects over the long term?

See also  Another "teacher" that feels this is something her students need to learn about.
See also  CNN’S MARY KATHARINE HAM’S EPIC VIRAL RANT AGAINST HER NETWORK: