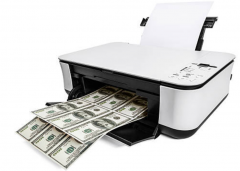 But loose monetary policies do not generate economic growth. These policies set in motion the diversion of real savings from wealth generators to the holders of the newly pumped money. Real savings, rather than supporting individuals that specialize in the enhancement and expansion of the infrastructure are consumed by various individuals that are employed in non-wealth generating activities.

Why then is loose monetary policy seen as a major contributor towards economic growth?

Given that economic growth is assessed by means of the gross domestic product (GDP) framework — which is nothing more than a monetary turnover — obviously then when the central bank embarks on monetary pumping (i.e., loose monetary policy) it strengthens the monetary turnover in the economy and thus GDP.

After deflating the monetary turnover by a dubious price deflator one obtains the so-called real GDP. By means of real GDP, economists and various other experts are supposedly in a position to ascertain the state of economic growth, or so it is held. (Note that the increase in the monetary turnover because of the increase in the money supply is regarded as reflecting economic growth). In such a framework, it is not surprising that central bank policies are an important factor in setting in motion an economic boom.

Whenever the economy deviates from the path outlined by central bank policy makers and the government, this will allow them the opportunity to intervene by either raising or slowing the pace of monetary pumping.

The economy in this way of thinking is depicted as a helpless creature that must be guided by the all-knowing bureaucrats all the time. The passivity of the creature called the economy is also reflected by the fact that the output generated must be distributed by the all-knowing bureaucrats. In fact, one gets the impression that bureaucrats supervise the entire production process and individuals are just submissive entities that have hardly anything to say here.

If loose monetary policies of the central bank are able to generate through the GDP statistic so-called economic growth, then this must mean that a tighter monetary stance sets an economic bust.

“Economic bust” is here associated with the liquidation of various non wealth-generating activities. That is, the economic bust results in the curtailment of non-productive consumption.

Can Government Policies Grow the Economy?

While loose monetary policy, which results in an exchange of nothing for something, cannot cause economic growth, can the same be said about an increase in government outlays? Will this not result in a strengthening in economic growth?

Now, fiscal stimulus could “work” if the flow of real savings is large enough to fund government activities while still permitting a positive growth rate in the activities of the private sector. (Note that the overall increase in real economic activity is in this case erroneously attributed to the government’s loose fiscal policy).

If, however, the flow of real savings is declining, then regardless of any increase in government outlays, overall real economic activity cannot be expanded. In this case the more the government spends (i.e., the more it takes from wealth generators) the more it weakens prospects for a recovery.

Thus when government by means of taxes diverts bread to its own activities the baker will have less bread at his disposal. Consequently, the baker will not be able to secure the services of the oven maker. As a result, it will not be possible to boost the production of bread, all other things being equal.

Similarly, as a result of the increase in government outlays other wealth generators will have less real savings at their disposal. This in turn will hamper the production of their goods and services and in turn will retard and not promote overall real economic growth.

As one can see, the increase in government outlays will lead to the weakening in the process of wealth generation in general.

Many commentators are of the view that lowering of taxes could be an important catalyst for the strengthening of economic growth. This could be so if the government also curtails its outlays. It must be realized that as long as government outlays continue to grow no effective cut in taxes is possible. Remember that the expansion in government outlays implies an increase in the diversion of real savings from wealth generators to government. Hence, an effective cut in taxes can only emerge once the government curtails its outlays.

For instance, government announces that it will cut the income tax by 5% at the same time it outlays are planned to increase by 10%. What matters here is that the government will require to increase the diversion of real savings by 10% in order to support the increase in its activities.