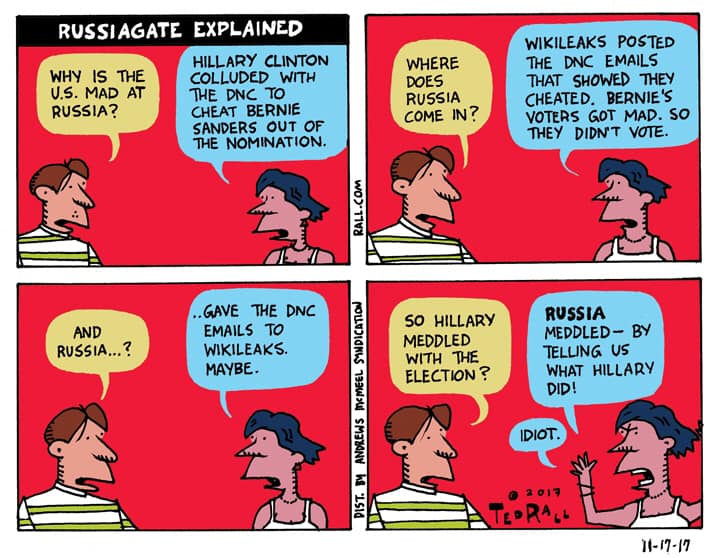 This cartoon seems to me very apposite. The capacity of the mainstream media repeatedly to promote the myth that Russia caused Clinton’s defeat, while never mentioning what the information was that had been so damaging to Hillary, should be alarming to anybody under the illusion that we have a working “free media”. There are literally hundreds of thousands of mainstream media articles and broadcasts, from every single one of the very biggest names in the Western media, which were predicated on the complete nonsense that Russia had conspired to install Donald Trump as President of the United States.

I genuinely have never quite understood whether the journalists who wrote this guff believed it, whether they were cynically pumping out propaganda and taking their pay cheque, or whether they just did their “job” and chose to avoid asking themselves whether they were producing truth or lies.

I suspect the answer varies from journalist to journalist. At the Guardian, for example, I get the impression that Carole Cadwalladr is sufficiently divorced from reality to believe all that she writes. Having done a very good job in investigating the nasty right wing British Establishment tool that was Cambridge Analytica, Cadwalladr became deluded by her own fame and self-importance and decided that her discovery was the key to understanding all of world politics. In her head it explained all the disappointments of Clintonites and Blairites everywhere. She is not so high-minded however as to have refused the blandishments of the Integrity Initiative.

Luke Harding is in a different category. Harding has become so malleable a tool of the security services it is impossible to believe he is not willingly being used. It would be embarrassing to have written a bestseller called “Collusion”, the entire premiss for which has now been disproven, had Harding not made so much money out of it.

Harding’s interview with Aaron Mate of The Real News was a truly enlightening moment. The august elite of the mainstream media virtually never meet anybody who subjects their narrative to critical intellectual scrutiny. Harding’s utter inability to deal with unanticipated scepticism descends from hilarious to toe-curlingly embarrassing.

In general, since the Mueller report confirmed that $50 million worth of investigation had been unable to uncover any evidence of Russiagate collusion, the media has been astonishingly unrepentant about the absolute rubbish they have been churning out for years.

Harding and the Guardian’s story about Manafort repeatedly calling on Assange in the Ecuador Embassy is one of the most blatant and malicious fabrications in modern media history. It has been widely ridiculed, no evidence of any kind has ever been produced to substantiate it, and the story has been repeatedly edited on the Guardian website to introduce further qualifications and acknowledgements of dubious attribution, not present as originally published. But still neither Editor Katherine Viner nor author Luke Harding has either retracted or apologised, something which calls the fundamental honesty of both into question.

Manafort is now in prison, because as with many others interviewed, the Mueller investigation found he had been involved in several incidences of wrongdoing. Right up until Mueller finalised his report, media articles and broadcasts repeatedly, again and again and again every single day, presented these convictions as proving that there had been collusion with Russia. The media very seldom pointed out that none of the convictions related to collusion. In fact for the most part they related to totally extraneous events, like unrelated tax frauds or Trump’s hush-money to (very All-American) prostitutes. The “Russians” that Manafort was convicted of lobbying for without declaration, were Ukrainian and the offences occurred ten years ago and had no connection to Trump of any kind. Rather similarly the lies of which Roger Stone stands accused relate to his invention, for personal gain, of a non-existent relationship with Wikileaks.

The truth is that, if proper and detailed investigation were done into any group of wealthy politicos in Washington, numerous crimes would be uncovered, especially in the fields of tax and lobbying. Rich political operatives are very sleazy. This is hardly news, and if those around Clinton had been investigated there would be just as many convictions and of similar kinds. it is a pity there is not more of this type of work, all the time. But the Russophobic motive behind the Mueller Inquiry was not forwarded by any of the evidence obtained.

My analysis of the Steele dossier, written before I was aware that Sergei Skripal probably had a hand in it, has stood the test of time very well. It is a confection of fantasy concocted for money by a charlatan.

We should not forget at this stage to mention the unfortunate political prisoner Maria Butina, whose offence is to be Russian and very marginally involved in American politics at the moment when there was a massive witchhunt for Russian spies in progress, that makes The Crucible look like a study in calm rationality. Ms Butina was attempting to make her way in the US political world, no doubt, and she had at least one patron in Moscow who was assisting her with a view to increasing their own political influence. But nothing Butina did was covert or sinister. Her efforts to win favour within the NRA were notable chiefly because of the irony that the NRA has been historically responsible for many more American deaths than Russia.

Any narrative of which the Establishment does not approve is decried as conspiracy theory. Yet the “Russiagate” conspiracy theory – which truly is Fake News – has been promoted massively by the entire weight of western corporate and state media. “Russiagate”, a breathtaking plot in which Russia and a high profile US TV personality collude together to take control of the most militarily powerful country in the world, knocks “The Manchurian Candidate” into a cocked hat. A Google “news search” restricts results to mainstream media outlets. Such a search for the term “Russiagate” brings 230,000 results. That is almost a quarter of a million incidents of the mainstream media not only reporting the fake “Russiagate” story, but specifically using that term to describe it.

Compare that with a story which is not an outlandish fake conspiracy theory, but a very real conspiracy.

If, by contrast, you do a Google “news search” for the term “Integrity Initiative”, the UK government’s covert multi million pound programme to pay senior mainstream media journalists to pump out anti-Russian propaganda worldwide, you only get one eighth of the results you get for “Russiagate”. Because the mainstream media have been enthusiastically promoting the fake conspiracy story, and deliberately suppressing the very real conspiracy in which many of their own luminaries are personally implicated.

Furthermore – and this is a truly tremendous irony, which relates back to the cartoon at the start – only two of the top ten news results for “Integrity Initiative” come from the Western corporate media.

And this next fact comes nearly into the “too good to be true” category for my argument. Those two MSM mentions, from Sky News and the Guardian, do not complain of the covert anti-Russian propaganda campaign that is the Integrity Initiative. They rather complain that it was an alleged “Russian hack” that made the wrongdoing public!! You could not make it up, you really could not.

Which brings us full circle to the DNC leak that sparked Muellergate and the claims that it was the Russians who lost Hillary the election. Robert Mueller repeats the assertion from the US security services that it was Russian hackers who obtained the DNC emails and passed them on to Wikileaks. I am telling you from my personal knowledge that this is not true.

Neither Mueller’s team, not the FBI, nor the NSA, nor any US Intelligence agency, has ever carried out any forensic analysis on the DNC’s servers. The DNC consistently refused to make them available. The allegation against Russia is based purely on information from the DNC’s own consultants, Crowdstrike.

William Binney, former Technical Director of the NSA (America’s US$40 billion a year communications intercept organisation), has proven beyond argument that it is a technical impossibility for the DNC emails to have been transmitted by an external hack – they were rather downloaded locally, probably on to a memory stick. Binney’s analysis is fully endorsed by former NSA systems expert Ed Loomis. There simply are no two people on the planet more technically qualified to make this judgement. Yet, astonishingly, Mueller refused to call Binney or Loomis (or me) to testify. Compare this, for example, with his calling to testify my friend Randy Credico, who had no involvement whatsoever in the matter, but Mueller’s team hoped to finger as a Trump/Assange link. 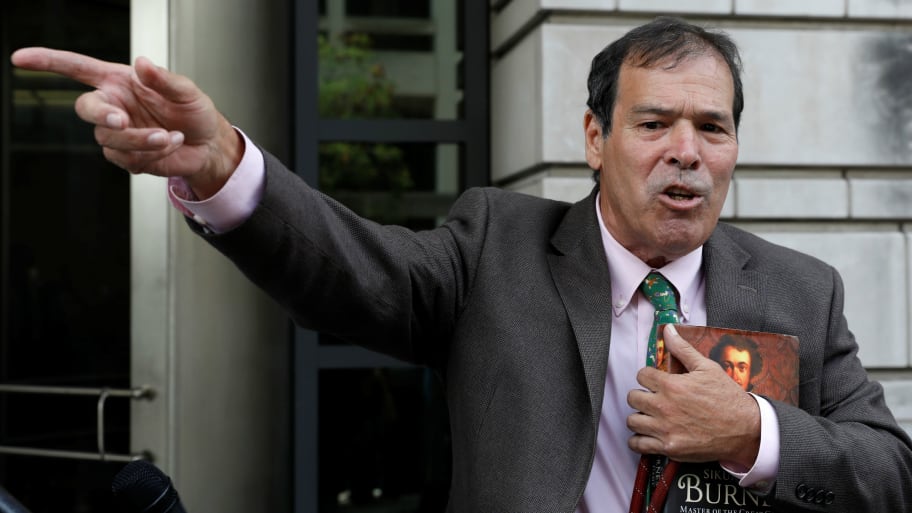 The DNC servers have never been examined by intelligence agencies, law enforcement or by Mueller’s team. Binney and Loomis have written that it is impossible this was an external hack. Wikileaks have consistently stressed no state actor was involved. No evidence whatsoever has been produced of the transfer of the material from the “Russians” to Wikileaks. Wikileaks Vault 7 release of CIA documents shows that the planting of false Russian hacking “fingerprints” is an established CIA practice. Yet none of this is reflected at all by Mueller nor by the mainstream media.

“Collusion” may be dead, but the “Russiagate” false narrative limps on.

I should add it seems to me very probable Russia did make some efforts to influence the US election. I worked a a British diplomat for 20 years and spent a lot of time trying to influence political outcomes in the country in which I was posted, in Eastern Europe and in Africa. It is part of the geopolitical game. The United States is of course the world leader by a long way in attempting to influence elections abroad, spending hundreds of millions of dollars to that effect in countries including Ukraine, Georgia, Ecuador and Venezuela recently, and pretty well everywhere in Africa. It is a part of normal diplomatic life.

Mueller uncovered some high level influence-broking meetings. This is what states do. He uncovered some sleazy deals. This is what rich people do. He uncovered some US $110,000 of Facebook ad spending from Russia targeted on the USA, some of which promoted sex toys, some of which was post-election, but some of which was apparently trying to assist Trump against Clinton. Compared to the amount the USA pumps into similar arms length assistance to Putin opponents in Russia alone, it was negligible. That this tiny bit of Facebook advertising crucially impacted the US $13,000,000,000 PR campaigns of the candidates is a ludicrous proposition.

That every country stay out of every other country’s politics is arguably desirable. It is not however the status quo, and the United States is in the worst position of all to complain.