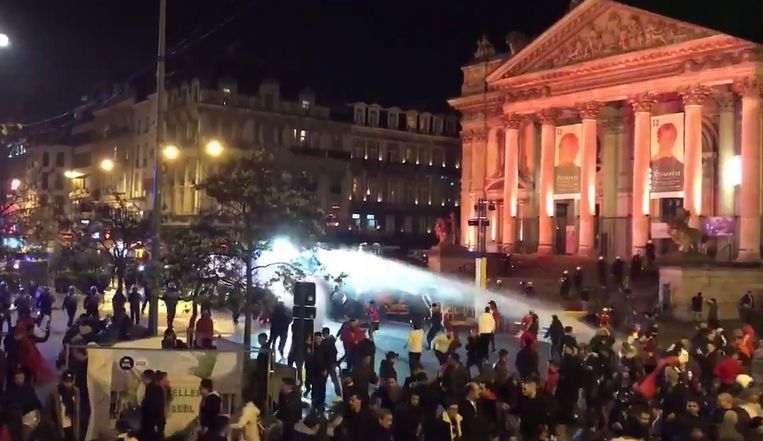 This just in, from Brussels, with love:

Riots at Christmas market in Brussels. Arabs storm the area. THIS is what regressive Democrats want for us and our children. Gun control leaves the populace undefended there. Yes! We demand extreme vetting. #MAGA #Immigration

Riots at Christmas market in Brussels. Arabs storm the area.
THIS is what regressive Democrats want for us and our children. Gun control leaves the populace undefended there.

If you were wondering what’s it all about, well, this is from last week, from Brussels, which by the way is the heart of the European Union and NATO (EU&NATO’s headquarters are located in Brussels). The thing is, Brussels is a very multicultural city, boasting a significantly large Muslim population.

And guess what: Moroccans (who are Muslims) were very happy after their country qualified for the world cup last week and they pulled a cultural enrichment for Brussels, i.e. they rioted (not very peaceful after all), flooded the streets and since there wasn’t much to do, they started fires, broke windows and the whole nine yards.

Parts of Brussels’ city center sustained heavy damage and even a Christmas Market was targeted by the peaceful Moroccans. The situation was very serious, with cars and private businesses destroyed  by Morocco’s supporters for absolutely no reason, after the football game ended.

The riots, plundering and the symphony of destruction that turned parts of Brussels into a war-zone started as a party (see the irony here) on the city’s main streets on November 11th, following the qualification match between Ivory Coast and Morocco’s football teams.  Things degenerated quickly after approximately 300 people decided to destroy a Christmas market and set cars on fire. There was sheer anarchy ruling the streets of Brussels, with riot police in full gear present at the scene and being absolutely useless. According to official figures, twenty two cops were injured by the rioting mob and, take a load of this: ZERO ARRESTS were made.

The problems with the Muslim community in Belgium generally speaking and Brussels in particular is that they live isolated in ghettos, no-go zones like Molenbeek, areas filled with mosques dominated by radical imams. In these neighborhoods, criminality is rampant and Muslims live in poverty, most of them on welfare, with unemployment rates of 40 percent, give or take. Also, Belgium and other European countries are under the immense threat of Islamic terrorism, as returning Syria jihadists make for a clear and present danger. It’s unbelievable that the EU governments allowed them to return and failed to enforce control over their own national borders.

Belgium’s Muslim population is currently at approximately 7% (official figures extrapolated), which is among the highest in Western Europe in terms of percentage. The center of Belgian jihadism is Molenbeek, a suburb of Brussels, where over 100,000 Muslims live, making for one of the most Islamic cities in the EU. Brussels alone has at least 300,000 Muslims, i.e. 25% of the population. The Muslims in Belgium and Western Europe live in parallel societies, and many of them are embracing Salafism, a conservative (as in radical) version of Islam, which calls to jihad (war) against nonbelievers for the glory of Allah.

The lesson to be taken home is this: not long ago Brussels was a cultural, peaceful, artsy city with tolerant, educated people. Then multiculturalism and open borders kicked in.