Climate bureaus around the world desperately want you to believe in global warming. Their budgets depend on scaring you. So they have stooped to outright fraud in “adjusting” old temperatures colder and recent temperatures warmer. Some have made comparison graphs like the one following to show how they have “disappeared” the 1930’s warmest decade ever so they could prove their false global warming fraud:

There are few thermometers outside of the US before the 1940’s. Yet those that were around in the Southern hemisphere show outright COOLING from the 1880’s till today: 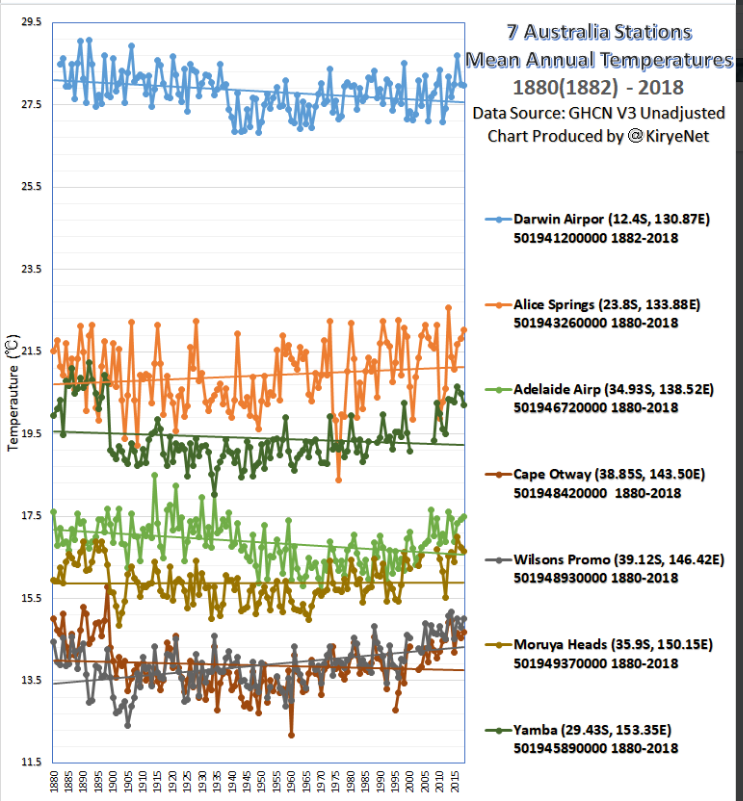 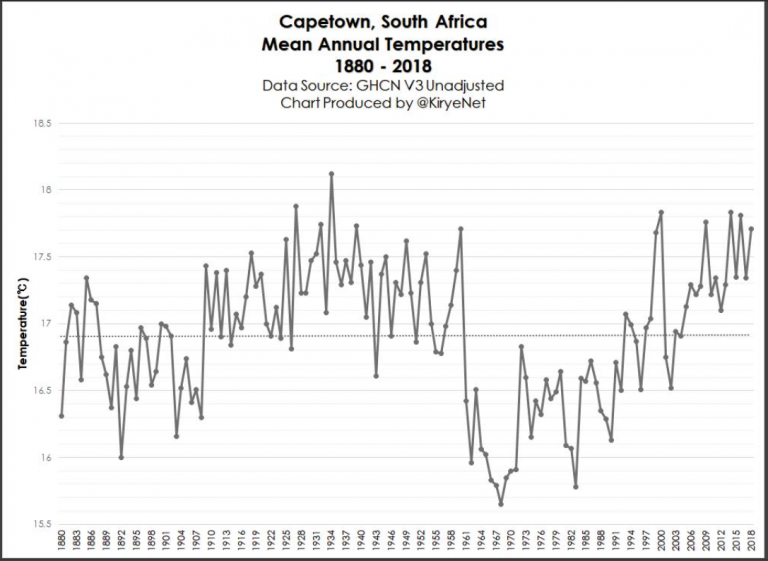 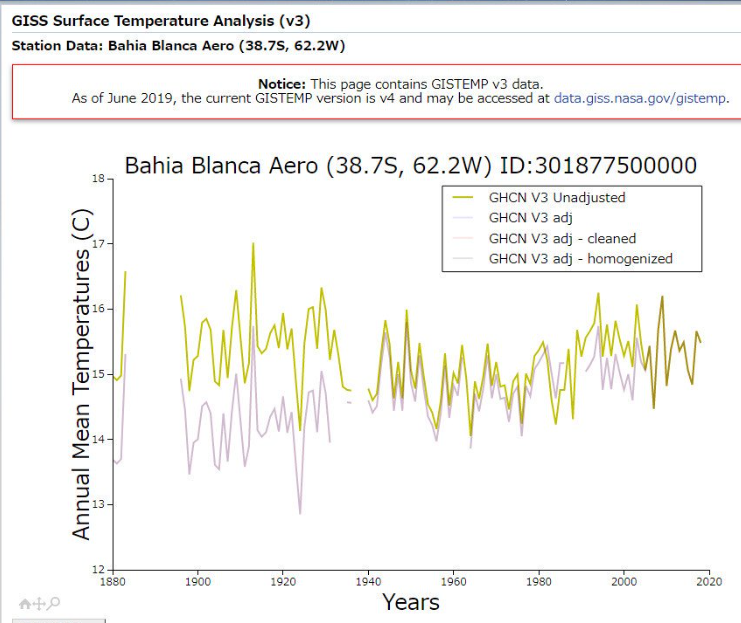 How can you have “global warming” when the entire southern hemisphere is cooling?

1 tiny millimeter
Atolls, Pacific, Sea level Rise, measured by satellites. Photo.
From 1969 – 2013 the seas have not changed the beaches around these Tuamotu atolls — or almost any other atoll you can name.

By every method known to man, seas are rising around 1mm a year:

1,000 tide gauges,
hundreds of studies of beaches,
satellites measuring sea levels, and
satellites measuring beaches.
All anyone needs to know about sea levels is that for the last 50 years sea levels have been rising at 1mm a year as shown by a thousand tide gauges all over the world. There was no acceleration. (Beenstock et al). Some of those gauges were rising, some falling, but when averaged out, it’s almost a wash at 1mm. Nils-Axel Morner took the opposite approach and studied 50 beaches around Scandinavia intensely, figured out which beach was at the centre of the turning crust and calculated that the seas were only rising at 0.9mm a year and for the last 125 years. (Morner, 2014).

Believe it or not, that fits with what the satellites used to say too (Morner 2004). From 1992 – 2000 the satellites recorded a rise of less than 1mm a year, but by 2003 that trend was retrospectively “adjusted” up to 2.3mm/year. As far as Morner can figure out, the satellites were calibrated to one sinking tide gauge in Hong Kong.

The Great Failure Of The Climate Models.

Authored by Patrick Michaels and Caleb Stewart Rossiter via The Washington Examiner,

Computer models of the climate are at the heart of calls to ban the cheap, reliable energy that powers our thriving economy and promotes healthier, longer lives. For decades, these models have projected dramatic warming from small, fossil-fueled increases in atmospheric concentrations of carbon dioxide, with catastrophic consequences.

Yet, the real-world data aren’t cooperating. They show only slight warming, mostly at night and in winter. According to the United Nations’ Intergovernmental Panel on Climate Change, there has been no systematic increase in the frequency of extreme weather events, and the ongoing rise in sea level that began with the end of the ice age continues with no great increase in magnitude. The constancy of land-based records is obvious in data from the National Oceanic and Atmospheric Administration.

Should we trust these computer models of doom? Let’s find out by comparing the actual temperatures since 1979 with what the 32 families of climate models used in the latest U.N. report on climate science predicted they would be.

Atmospheric scientist John Christy developed a global temperature record of the lower atmosphere using highly accurate satellite soundings. NASA honored him for this achievement, and he was an author for a previous edition of the U.N. report. He told a House Science Committee hearing in March 2017 that the U.N. climate models have failed badly.

Christy compared the average model projections since 1979 to the most reliable observations — those made by satellites and weather balloons over the vast tropics. The result? In the upper levels of the lower atmosphere, the models predicted seven times as much warming as has been observed. Overprediction also occurred at all other levels. Christy recently concluded that, on average, the projected heating by the models is three times what has been observed.

This is a critical error. Getting the tropical climate right is essential to understanding climate worldwide. Most of the atmospheric moisture originates in the tropical ocean, and the difference between surface and upper atmospheric temperature determines how much of the moisture rises into the atmosphere. That’s important. Most of earth’s agriculture is dependent upon the transfer of moisture from the tropics to temperate regions.

Globally averaged thermometers show two periods of warming since 1900: a half-degree from natural causes in the first half of the 20th century, before there was an increase in industrial carbon dioxide that was enough to produce it, and another half-degree in the last quarter of the century.

The latest U.N. science compendium asserts that the latter half-degree is at least half manmade. But the thermometer records showed that the warming stopped from 2000 to 2014.

In two of the four global surface series, data were adjusted in two ways that wiped out the “pause” that had been observed.

The first adjustment changed how the temperature of the ocean surface is calculated, by replacing satellite data with drifting buoys and temperatures in ships’ water intake. The size of the ship determines how deep the intake tube is, and steel ships warm up tremendously under sunny, hot conditions. The buoy temperatures, which are measured by precise electronic thermistors, were adjusted upwards to match the questionable ship data. Given that the buoy network became more extensive during the pause, that’s guaranteed to put some artificial warming in the data.

The second big adjustment was over the Arctic Ocean, where there aren’t any weather stations. In this revision, temperatures were estimated from nearby land stations. This runs afoul of basic physics.

Even in warm summers, there’s plenty of ice over much of the Arctic Ocean. Now, for example, when the sea ice is nearing its annual minimum, it still extends part way down Greenland’s east coast. As long as the ice-water mix is well-stirred (like a glass of ice water), the surface temperature stays at the freezing point until all the ice melts. So, extending land readings over the Arctic Ocean adds nonexistent warming to the record.

Further, both global and United States data have been frequently adjusted. There is nothing scientifically wrong with adjusting data to correct for changes in the way temperatures are observed and for changes in the thermometers. But each serial adjustment has tended to make the early years colder, which increases the warming trend. That’s wildly improbable.

In addition, thermometers are housed in standardized instrument shelters, which are to be kept a specified shade of white. Shelters in poorer countries are not repainted as often, and darker stations absorb more of the sun’s energy. It’s no surprise that poor tropical countries show the largest warming from this effect.

All this is to say that the weather balloon and satellite temperatures used in Christy’s testimony are the best data we have, and they show that the U.N.’s climate models just aren’t ready for prime time.