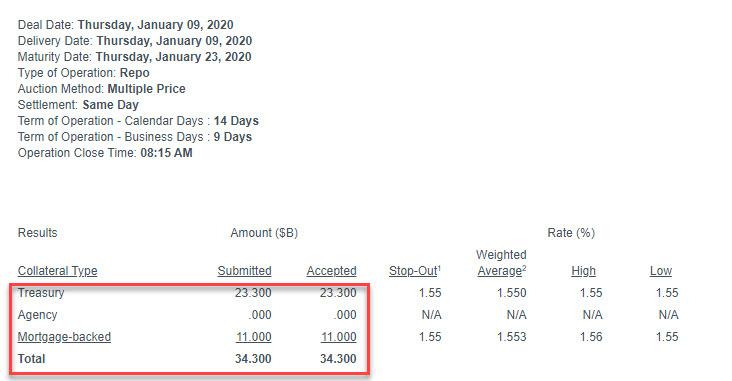 … coupled with a surge in amount of overnight repo submission, indicated that the funding situation in the repo market had again deteriorated sharply, which was odd since we are now two weeks into the new year and further away from the time when the repo market was supposedly in distress due to the year-end funding constraints.

Indeed, something appears amiss, because as Curvature Securities’ Scott Skyrm writes in his daily Repo Market Commentary note, the total overnight and term Fed RP operations on Friday were greater than on year end! On year-end, the Fed had pumped a total of $255.95 billion into the market verses $258.9 billion on Friday.

And just like that, the repo market is on the fritz once again.

More than two weeks after the last oversubscribed term repo operation on December 16, moments ago the Fed announced that Dealers are once again scrambling for liquidity, submitting $41.12BN in securities ($30.7BN in TSYs, $10.42BN in MBS) into today’s 2-week repo operation, which was oversubscribed hitting the maximum operation limit of $35BN.

Today’s oversubscription was ominous because while the liquidity shortage into year-end was expected, and justified the barrage of term repos ahead of the “turn”, the liquidity shortage was supposed to normalize after the new year. Alas, that appears to not have happened, and today’s submission was the highest since Dec 16.

Bank of America: Fed is annualizing >$1 trillion in QE for the last 4 months…. seriously it’s that NYC real estate collapse & they’re trying to save the banks…it’s right under Wall Street’s nose (just like 2008)

here’s another aspect of this hidden crisis: to allow the banks to survive, the Fed & elite…SHORT THE STOCK MARKET, AND THEN TORPEDO STOCKS (TO PAY OFF THEIR REAL ESTATE DEBTS)??