by Daniel Carter
I’ve recently stumbled upon a reimagined political compass that does a fantastic job of illustrating today’s political environment. It is less focused on the perceived divide between the left and the right and more focused on the true divide between the status quo and people desperately seeking change. It was created by Eric Weinstein; a mathematician, economist, public intellectual and Managing Director at Thiel Capital. His new and improved political compass ditches the mainstream narrative and does a better job of showing you who your true political allies and enemies are.
First, let’s look at the old political compass as a starting point for understanding Weinstein’s political compass. Most people are familiar with the 4-quadrant political compass pictured below. It separates political preferences in to four categories: Authoritarian Right, Authoritarian Left, Libertarian Left and Libertarian Right. This compass is extremely useful, but Weinstein’s compass gives us a different perspective. 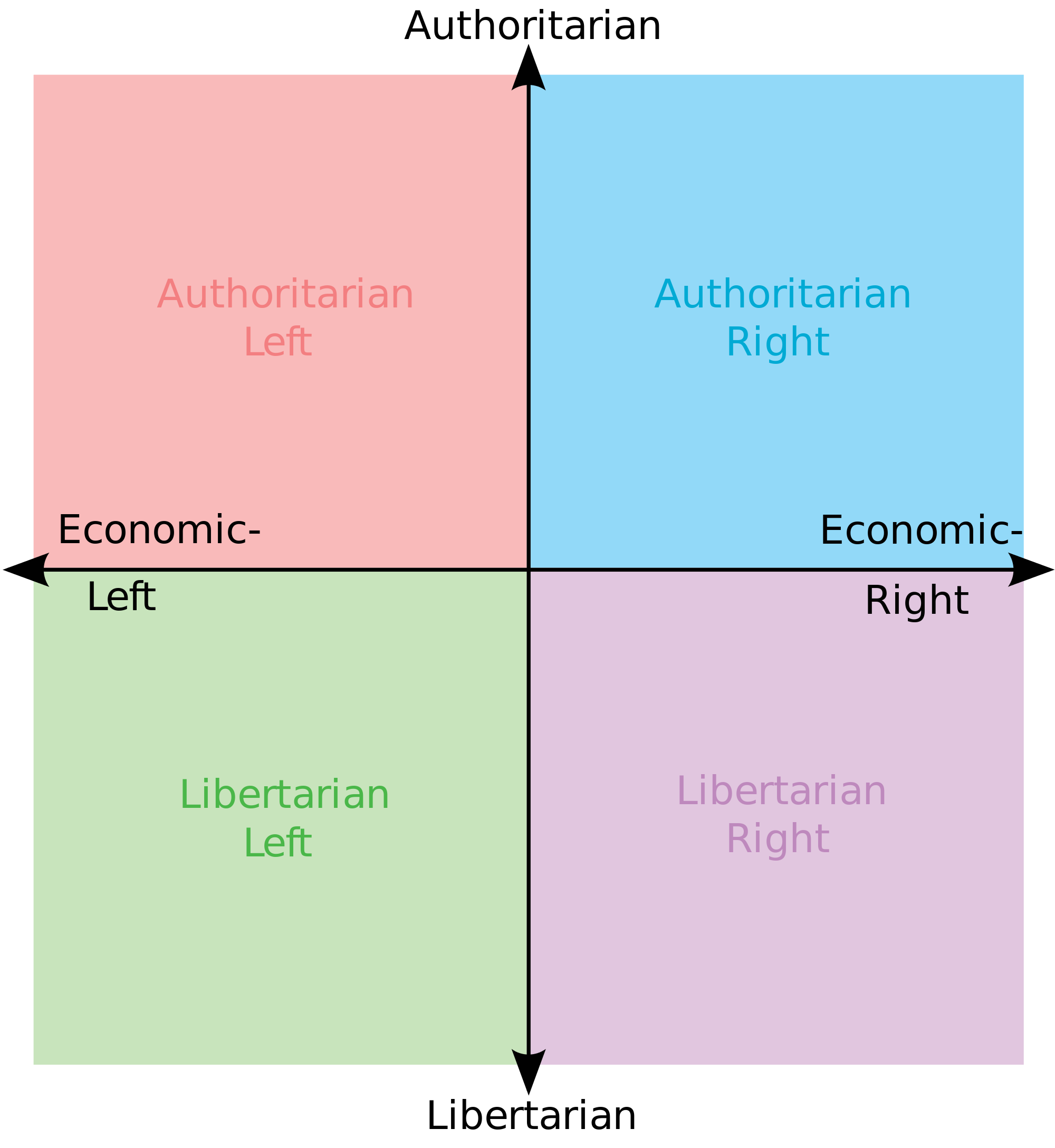 Eric Weinstein created his political compass because he noticed considerable overlap between the Libertarian Left and Libertarian Right. In many ways, these two sides are allies. He also noticed that the Authoritarian Left and the Authoritarian Right were strictly opposed to each other and usually opposed to the two libertarian quadrants. Below is Weinstein’s interpretation of the political compass, where he groups the two libertarian sides together in the upper left quadrant and introduces three other distinct groups that are not often talked about.

Rent-Seeking Elites
This is by far the most powerful group in politics. This group is made up of bankers, weapons manufacturers, oil companies, mainstream media executives, politicians, and many other high-ranking elites that make astronomical sums of money without producing value for society. A lot of the time they outright destroy value. Their main goal is to maintain the status quo that allows them this extremely privileged position in society. To accomplish their goal, they use the mainstream media to consistently pump their narrative into the naïve heads of US citizens.
Dupes
Along with the mainstream media, this group helps spread the elite’s narrative. These people are fairly well-educated and usually make above average incomes. They often believe that they are elites. The Dupes get their information from the New York Times, NPR, MSNBC, CNN, the Washington Post and many other mainstream outlets that are controlled by the Rent-Seeking Elites. They’re convinced that they are “in the know.” When other groups deviate from mainstream thought, they are quick to label them racists, xenophobes, sexists or bigots. The Dupes are the group most under the influence of the elites.
First Principled Thinkers/Contrarians
This group is the number one enemy of the elites because they think for themselves. This is the group comprised mostly of the Libertarian Left and Libertarian Right. In other terms, the Contrarians are made up of conservatives, classical liberals, centrists, independents, libertarians and even principled progressives. Contrarians are seeking change by challenging mainstream thought. They are objective about Trump instead of hysterical. They champion free speech; even the speech they disagree with. They are not afraid to openly and honestly discuss race or gender. When discussing things with people whom they disagree, they do it civilly. Because they are not conventional in their beliefs and are willing to discuss politically incorrect topics, the Rent-Seeking Elites and Dupes map them to the Troglodyte quadrant. This is the punishment for going off script.
Troglodytes
These people are the least educated of the four groups. The Troglodytes are extremely tribal. This is where you will find people with the most extreme and detestable beliefs. Think white supremacists on the right and trash can abusing Antifa members on the left. They are quick to violence and hard to reason with. The Rent-Seeking Elites want people to think that this is a large and formidable group. Troglodytes are the enemies that Rent-Seeking Elites use to galvanize their army of Dupes. As I mentioned above, anyone who deviates from mainstream thought is relegated to this group by the Dupes.
To get a better idea of how Weinstein’s political compass works in the real world, let’s use it to examine Jordan Peterson’s recent Channel 4 interview. If you haven’t seen it yet, I highly recommend watching the entire interview. During the very odd encounter between Cathy Newman and Jordan Peterson, Peterson logically dismantled one of the central claims of radical and mainstream leftism. He used scientific studies and reason to show that women don’t get paid less than men primarily because of discrimination. Well, that goes against the narrative of the Rent-Seeking Elites. Their Dupes sprang into action immediately. A flood of articles were written by the mainstream pundits to try and discredit Jordan Peterson. Not his argument, but his character and the character of his fans.

I can't believe how this is being spun. It's mindblowing… t.co/XpDIOGsk0t

Peterson went too far off the script that was written by the elites. Now he is being mapped to the Troglodytes quadrant by a rabid gang of Dupes. 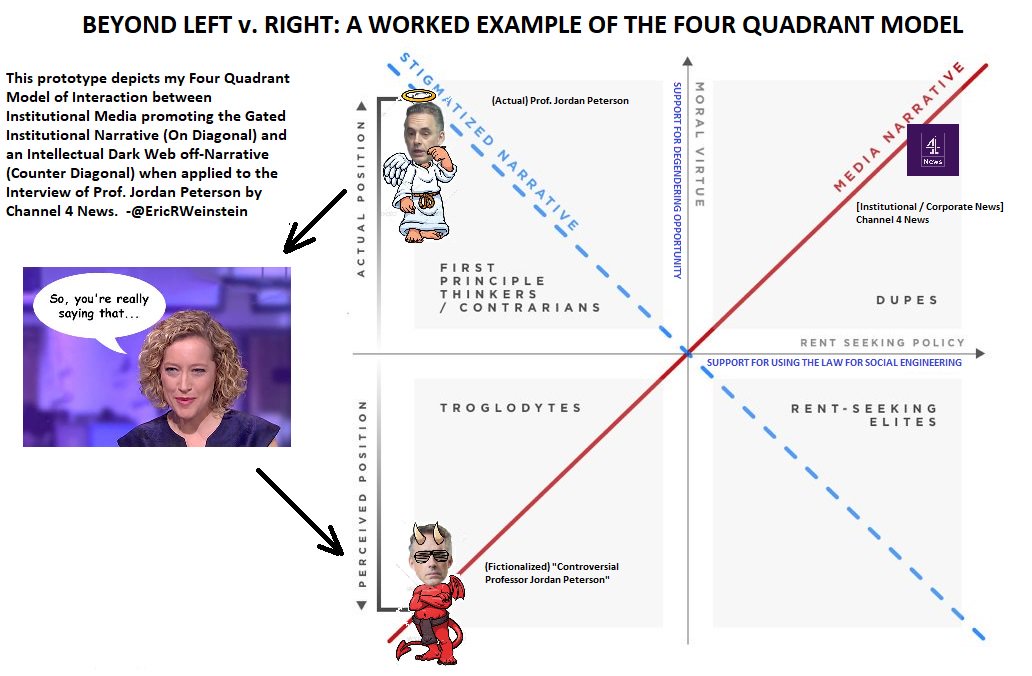 I believe Weinstein’s 4-quandrant political compass does a great job of breaking down the current culture war into more understandable and useful terms.  To defeat the Rent-Seeking Elites, we must understand their tactics first.
Most readers, I predict, will map to the Contrarian quadrant. That doesn’t mean we agree on everything, but it does mean we think objectively enough about the world to have a civilized discussion on topics in which we disagree. As the culture war rages on, it’s becoming exceptionally important to discover your true enemies and find common ground with others. If you lean right, don’t assume everyone on the left is an enemy, and vice versa.

See also  Obama: "if I could make an arrangement where I had a front man doing all the talking..."
See also  Where Did All The People Go?
4,111 views

1 thought on “New And Improved Political Compass: Where Do You Stand?”