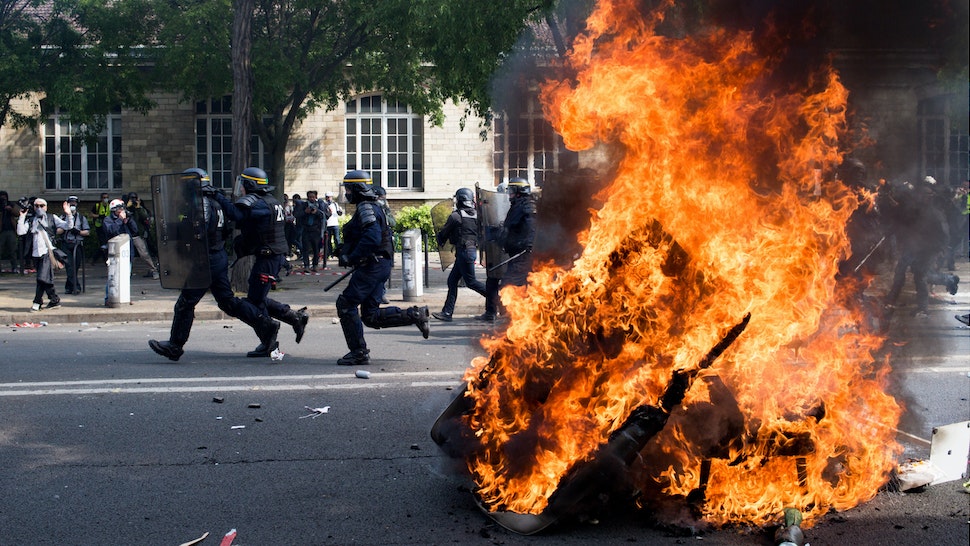 The Daily Wire Sunday (Nov. 24) reported the results of a new Rasmussen poll that found a majority of likely voters believe violence will erupt regardless of how the impeachment of Present Trump plays out. A striking percentage of those polled believed that members the other political party “lack the traits to be considered fully human—they behave like animals.”  A smaller percentage thought members of the other political party were “downright evil.”

There is an old Chinese curse that goes something like this: 願你生活在有趣的時代 May you live in interesting times.

Specifically, the survey asked respondents: “How concerned are you that President Trump’s impeachment and removal from office will lead to violence?” Rasmussen reports that 53% of respondents indicated that they are concerned. 24% are “very concerned.”

The survey also asked: “How concerned are you that those opposed to President Trump’s policies will resort to violence?” 59% of respondents indicated that they are concerned. 34% are “very concerned.”

“While 40% of Democrats are very concerned that those opposed to Trump’s policies will resort to violence, just 18% feel that way about his supporters if the president is removed from office,” according to Rasmussen. When asked about the likelihood of a new “civil war” occurring within “the next five years,” 31% of respondents said that such a scenario is likely. 9% said it was “very likely.”

Awareness of political aggression and politically-motivated violence seems to have moved to the forefront of America’s collective consciousness.

According to a Pew Research survey conducted in April and May, 85% of respondents believe that the “nature of political debate … has become more negative in recent years.”

An October 2018 survey conducted by McLaughlin & Associates on “800 full-time undergraduates” found that a significant number of students believe that violence is justified as a preventative measure against “hate speech.”

According to The Wall Street Journal, the survey asked students if they agreed or disagreed with the following statement: “If someone is using hate speech or making racially charged comments, physical violence can be justified to prevent this person from espousing their hateful views.” 33% said that they “agree” with the statement.

In early-October, Nathan Kalmoe, assistant professor of political communication at Louisiana State University, tweeted out some troubling information from a YouGov survey:

A small but disturbing percentage of respondents indicated favorability toward “political violence,” according to Kalmoe. 55% of Reps & 44% of Dems said the other party is “not just worse for politics—they are downright evil.”

34% of Reps & 27% of Dems said the other party “lack the traits to be considered fully human—they behave like animals.”

We also asked several questions about attitudes toward political violence. Here’s one. Other items asked about threatening leaders & citizens, & support for violence if your party loses in 2020. You can see most (but not all) people rejected partisan violence today.

The survey asked: “How much do you feel it is justified for [own party] to use violence in advancing their political goals these days?”

That means that out of all respondents, approximately 12.7% were at least a little bit comfortable with the idea of using violence as a tool of political power.

The Rasmussen survey report can be viewed here: