There is a natural level of “full employment” that has been established since the full inclusion of women in the labor force. This is to say there are only so many persons among the working age population willing, capable, and available to work. Once that cohort of available workers is employed…full employment is achieved and the fuel for further organic growth is spent. Absent further potential growth (because no more fuel exists, we call this a “recession”).
Absent that working age population growth, the only means to create more potential “fuel” are massive job loss events (given names such as “sub-prime crisis” and “Corona-Virus crisis”). Then, in the wake of these mass layoff events, large “job gains” can be claimed via ZIRP, federal debt / stimulus, Federal Reserve QE. But they are not job gains…they are simply re-employing the same cohort.
So, due to the decelerating growth, and now declining working age population versus ever more aggressive means to re-employ those same persons…the crisis are coming faster and hitting more intensely due to the demographic reality we now face. These “full employment” moments where stimulative policy led to an exhaustion of potential employees have taken place in ’89, ’00, ’07, ’19, and now again in 2022.
I’ll detail this impact first among the 25 to 54 year old population and then widen out the the broadest possible working age population of 15 to 74 year olds.
Below, 25 to 54 year old population, employees. Core population growth began decelerating end of the century and ceased as of 2007. Those employed among this age group have essentially stagnated since 2000…but the chart below shows an additional 2 million more employees than are currently employed which is likely to be achieved by early 2022. 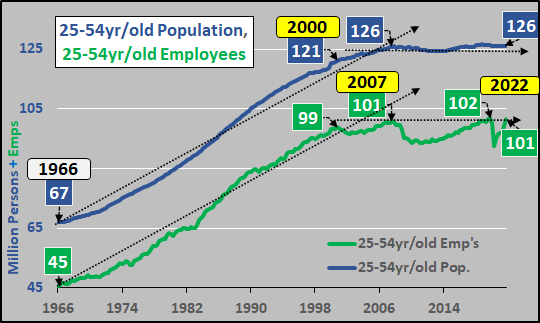 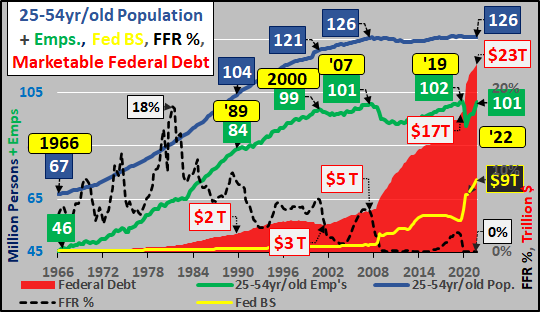 Below is the critical chart…with the addition of those 2 million more jobs (this cohort lost about 14 million jobs, has regained 12 million) against a total 25 to 54 year old population which has not grown…we are at full employment. Point is, by early to mid 2022, approximately 80.5%’ish employment/population ratio will be achieved…and that is typically the end of the line where the engine simply runs out of gas. Typically, “full employment” coincides with initiation of interest rate cutting cycles, federal deficit spending, and more recently large Federal Reserve balance sheet growth (yes, just as the Fed is initiating a QE tapering and discussing interest rate hikes and the federal government is reducing stimulus?!?). This combination of full employment versus tightening is almost sure to initiate deceleration and recession. 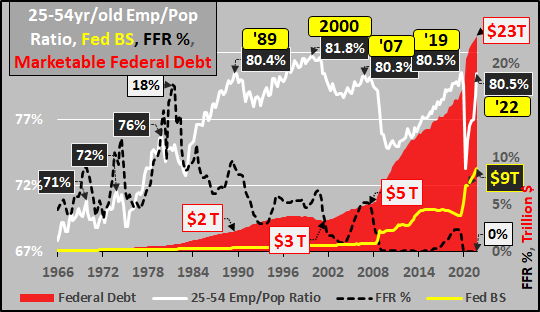 Below, looking at the largest possible working age population, 15 to 74 year olds and those employed among them. Note the large deviation from trend line in those employed versus population, This is the declining labor force participation of the only portion of this population that is growing…the 65+ aging population. The employed assumes 2 million more employees than are presently employed against little to no population growth. 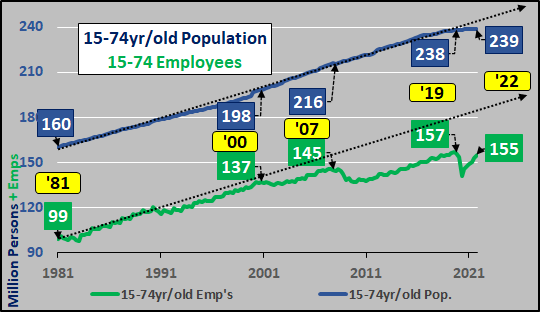 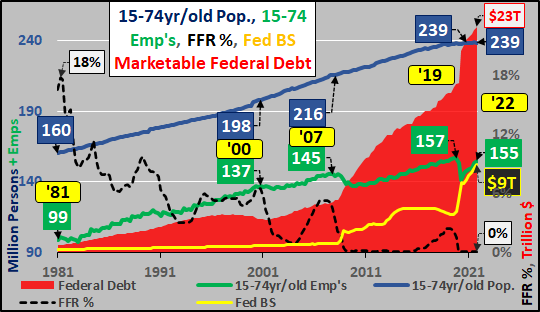 I save the most important for last. While the 25 to 54 year old population isn’t growing, the “full employment” ratio is generally flat at about 80.5%. Conversely, the still growing 15 to 74 year old population (thanks entirely to the elderly portion of this population) is seeing a continual decline in what constitutes “full employment”. Thanks to the participation levels among the 65+, full employment (and the end of economic “fuel”) will only continue to decline regardless continued ZIRP (NIRP?), QE, federal debt/stimulus, MMT/UBI, etc. 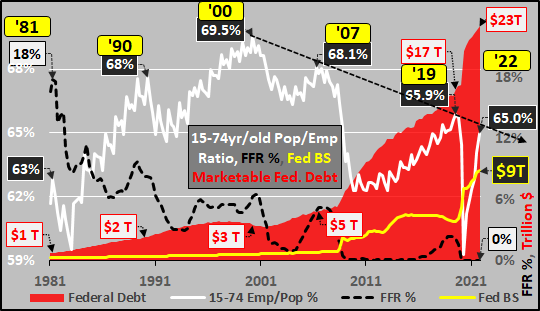 Demographics simply are and care not what the Federal Reserve or Wall Street or the White House need to bridge the ever widening chasm of an economy serving a barely growing “We the People” versus an economy twisted/tortured to serve the needs of an infinitely “growing” financial system serving “the Few”. This series of supposed financial crisis have been nothing of the sort…they are so obvious and predictable. 2022 is just the next demographic chapter where full employment is achieved. Regardless how it is cloaked via some ongoing or new version of “crisis”, be prepared because this will almost surely be the launch of unimaginable debt, NIRP, QE, UBI, MMT, and acronyms not even in existence yet. Whether it is called the “great reset” or hyper-inflation or whatever…this is the end of one historic period and the beginning of another.