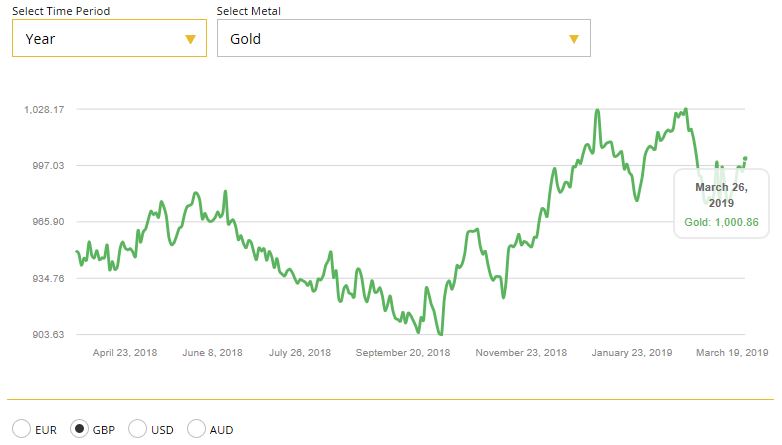 Gold rose to 4 week highs overnight prior to profit taking saw the yellow metal give up some of those gains. Gold marched higher yesterday, extending it’s recent rally due to growing, if belated, concerns over slowing economic growth and the Federal Reserve’s move to looser monetary policies again.

Gold rose 0.8% yesterday to $1,323.40 per ounce which was it’s highest level in a month. Investors have diversified into safe haven gold following news the Fed expects to suspend interest rate rises in 2019. This was something we wrote and spoke about (podcast and video interviews) as inevitable given the fragile nature of the economic recovery.

Even greater uncertainty around Brexit,  just three days before Britain’s scheduled departure from the EU on March 29th may impact sterling and markets and should support gold, especially in sterling which has risen to the £1,000/oz level again.

There will be a very negative impact on Ireland’s economy in the long-term as a result of Brexit, a new report by the Irish ESRI and Department of Finance has concluded. The European Commission (EC) said yesterday that it has completed preparations for a no-deal Brexit, noting “it is increasingly likely that the United Kingdom will leave the European Union without a deal on 12 April”.

See also  Shortest Recession In History Sets Up Next Recession

Along with gold, certain government bonds have gained, pushing yields to their lowest level in more than a year, while one yield curve measure has inverted for the first time since August 2007. The inversion of the yield curve for three-month and 10-year Treasuries has righted led to recession worries in the market and led to sell offs in stock markets in recent days.

Markets were already attempting to come to grips with weaker economic data of late including poor global manufacturing data and US consumer spending.

Spot gold was up about 1 per cent last week, notching a third consecutive week of gains. Gold has gained nearly 13 per cent since it’s most recent sell off in August.