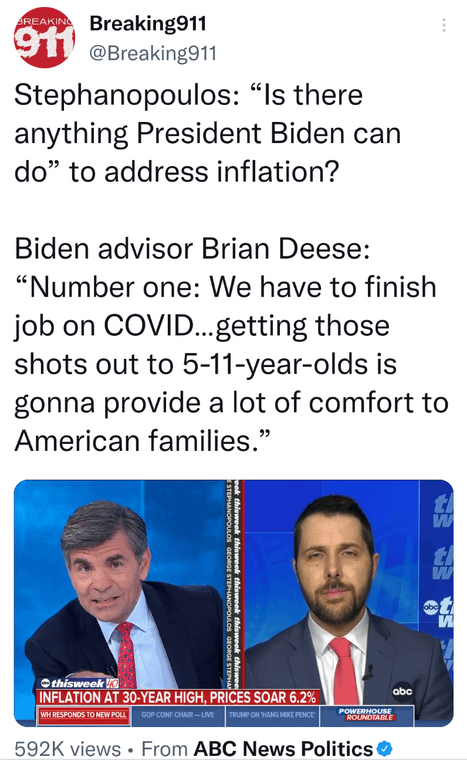 Somewhere in the upper northeast there must be an economic school or think-tank where leftist graduate students are taught how to verbalize cognitive dissonance using the same 300 words and emojis in a sequential pattern.   Two of the most visible alma maters’ of this school are Transportation Secretary Pete Buttigieg, and a fellow named Brian Deese, who is now the White House National Economic Council director.

In his latest exhibition of post-graduate cognitive dissonance, Deese nuts, the primary architect of the JoeBama economic program, appears on NBC to proclaim that massive U.S. inflation is somehow connected to the fact that 5 to 11-year-old children are not yet vaccinated. [Video at 01:30]  Once the children are vaccinated, some unknown and difficult to explain metamorphosis will take place amid the American workforce allowing the U.S. economy to stop inflation.

THIS WILL END IN TEARS:  Biden Admin Plans To Make Gas Even More Expensive Because You’re Not Poor Enough Yet.

“Did you ever think you’d be paying this much for a gallon of gas?”

That’s apparently what Joe Biden wants to know, while he and the rest of his administration do their best to make sure you’re paying even more every time you fill up the tank.

NO ONE CAN BE THIS STUPID:  Media: Inflation Isn’t A Big Deal Because You Got Money During Pandemic.

“I think the odds are that we’re going to have inflation of a kind we haven’t seen in 30 years, until either the Fed takes some significant move with respect to monetary policy, or until there’s some kind of accident that disrupts the economic growth we’re enjoying.”

“I think it’s possible but quite unlikely that inflation will recede back to its normal 2 percent level without some significant change in the path we’re now — we’re now on.”

Summers continued by pointing out that he things the Biden administration is acting incorrectly and making the situation worse.

Summers has it on good authority not to underestimate Joe’s ability to f*** things up.