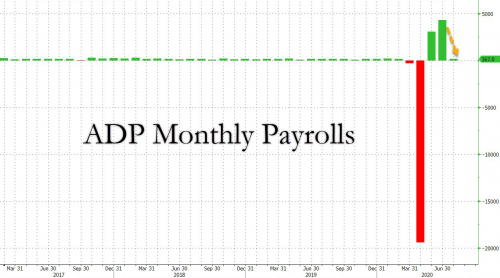 These pictures are worth thousands of words:

Or expressed this way:

How bad was it, relative to economic decline in other recessions?

Biggest drop in total US GDP on record!

Though there is clearly no “V” in the economy, there has been a “V” in stocks (though it appears to be starting to sputter out); but how does this rocket rally compare to famous “bear-market rallies” that plunged even lower in the end, and how long did those rallies endure before stocks fell even lower?

This stock rally has climbed a steeper trajectory than others, but it has had FAR more Fed fuel than any in history. Yet, it has still not reached as high so far as some if the other big ones are expressed in today’s dollars and graphed for when they would have ended if they began when this one did.