Nomura: A second market sell-off could be ‘Lehman-like’

Investors shouldn’t take much solace from Tuesday’s slight rebound from the worst day of the year because the next sell-off could be even more violent, something resembling a crisis-level plunge triggered by the collapse of Lehman Brothers, according to Nomura.

This view is much more catastrophic than the rest of Wall Street with most firms predicting a stock market correction (down 10%) at most and likely just a slight pullback. Nomura is basing its view on data showing hedge funds fleeing the market and said more are set to exit when their algorithms are triggered by rising volatility.

Stocks are set to rebound from their worst day of the year on Tuesday as China stabilized the yuan, which many believed was used as a weapon in the trade war with the U.S. The Dow Jones Industrial Average dived 767 points on Monday, its sixth largest point drop in history, after China allowed its currency to breach a psychological level and also halted purchase of U.S. farm goods. The Cboe Volatility Index, AKA Wall Street’s “fear gauge,” swung to the highest in 2019 on Monday.

(Bloomberg) — The latest eruption in the U.S.-China trade dispute pushed a widely watched Treasury-market recession indicator to the highest alert since 2007.

Rates on 10-year notes sank to 1.714% on Monday, completely erasing the surge that followed President Donald Trump’s 2016 election. At one point, they yielded 32 basis points less than three-month bills, the most extreme yield-curve inversion since the lead-up to the 2008 crisis.

The moves follow reports that China is responding to the American president’s threat of more tariffs by allowing the yuan to fall and halting imports of U.S. agricultural products. Many major investors expect the slide in 10-year yields to continue given the risk that a protracted dispute creates for markets.

“We could be in a significantly lower-rate environment for a while” given that central banks are poised to ease, Rieder told Bloomberg Television on Monday.

The outlook for steeper declines resonated in options markets, too, which saw trades targeting a drop through 1% this month.

10yr treasury is pretty much dead 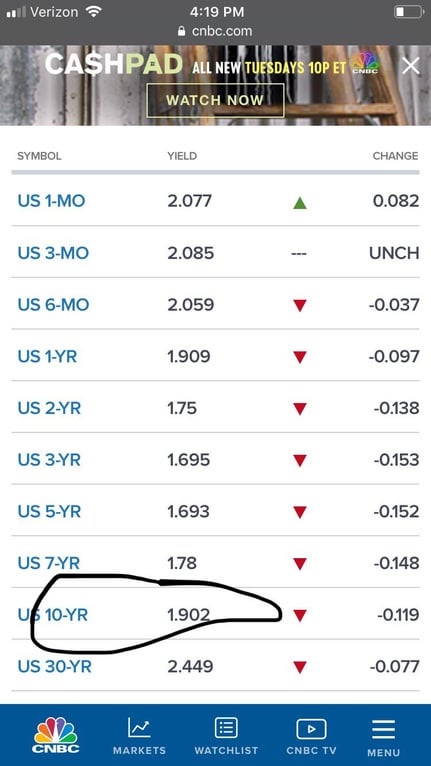